You probably didn't realise that the area around Holloway Road was recently home to some extremely dangerous orange monsters. Thankfully, a courageous team of Games students headed out on Monday morning to collect hidden weapons and do battle, using their mobile phones.

In fact, they were so successful that local cafe El Rincon offered them all a special brunch discount - and nearby residents were saved from a fate worse than death.

We are lucky to have such a capable cohort on our Games Programming BSc, Games Animation, Modelling and Effects BSc and Digital Media MA degrees this year. In fact, the students were play-testing a new game from Project AR, called The Jack.

Project AR CEO Tiziano Mosca and his colleague Priyank Dobariya visited our Augmented Toy Development class to brief the intrepid hunters, then followed them onto Holloway Road to watch what happened. Afterwards, the students gave Tiziano and Priyank some helpful feedback on their prototype game and asked lots of questions.

"There is definitely potential with AR (augmented reality)," says games programmer Stefanos Triantafyllidis. "It's a relatively new area with not much competition, but there are also different risks and privacy issues to consider with location-based games."

"Testing our game with Game Programming students from London Metropolitan University was a great experience for us!" adds Tiziano. "At this stage, it's crucial for our startup company to run a reality check with acknowledged gaming students, to prove our concept and understand what features future players will love.

“This opportunity also meant we could interact and build connections with the industry experts of tomorrow, get them to have fun and engage with local businesses, and share our experience of setting up an independent gaming company."

I facilitated the event and took part in the game, although I didn't personally manage to defeat any monsters. "Suffering Sappho! This city needs us!" I declared. 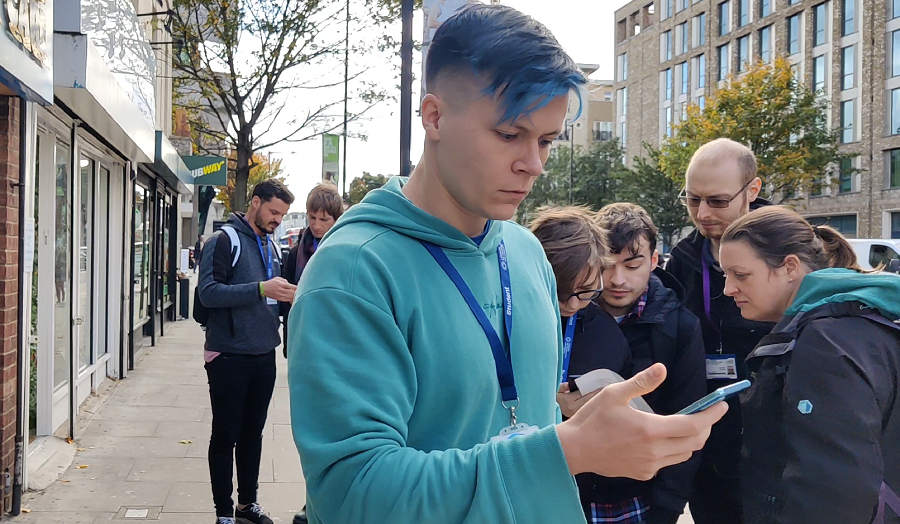