Aldgate Winter Fair and Lantern Parade News from The Cass

This year’s Aldgate Winter Parade saw hundreds of people from local schools, residents, and community groups coming together to carry lanterns on the parade to celebrate the cultural wealth of the area.

Interior Design BA and Interior Architecture and Design BA students have been working with the Sir John Cass Primary School Art Club on Tuesday evenings to make the giant animal lanterns that were the highlight of the show on the streets of Aldgate.

The parade culminated with the Winter Fair held on Aldgate Square where Furniture and Product Design BA and Fashion Accessories and Jewellery BA hosted a stall exhibiting and selling their work to raise money for trips next year or charities such as Refugee Impact.

Food and music was supplied by local organisations such as TATI, a Brick Lane social enterprise, the Sir John Cass Primary School Choir, the Bollywood Brass Band; and arts events with the Museum of London, City of London’s Sculpture in the City programme, and Toynbee Hall.

On Aldgate Square, the Christmas lights were switched on accompanied by mulled wine and performances by the London Music Hall Choir and the BIG gospel choir. Cass students and staff greatly enjoyed the festivities alongside their Aldgate neighbours. 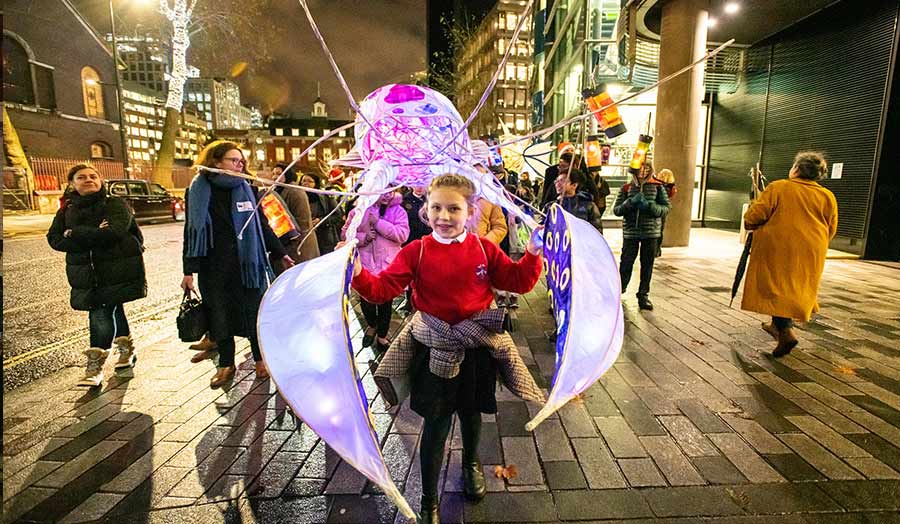