Dr Jacek Ludwig Scarso is Reader in Art and Performance at the School of Art, Architecture and Design (AAD). He is a University Teaching Fellow and Course Leader on the Public Art and Performance MA. He is Deputy Director of CREATURE (The Centre for Creative Arts, Culture and Engagement), leading its Research Group Public-Face. 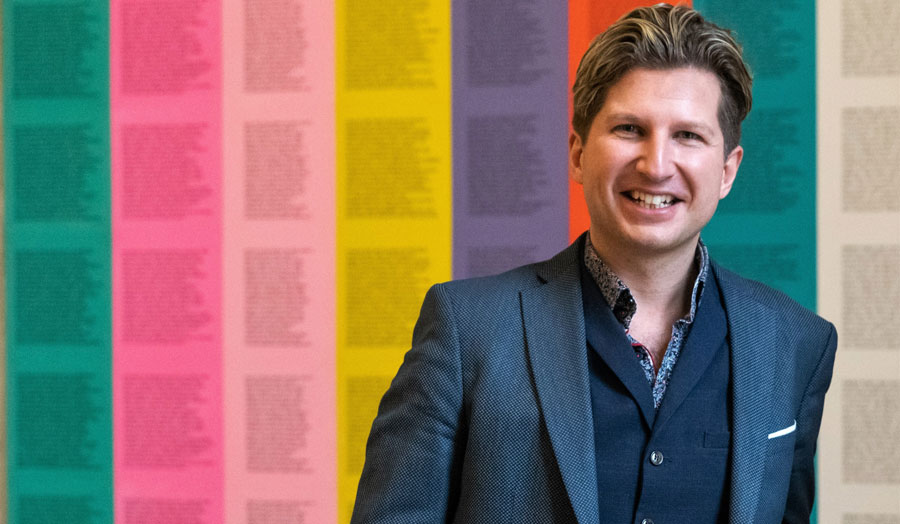 Dr Jacek Ludwig Scarso is recognised internationally for his work as an artist, theatre director, curator, voice practitioner and academic.

Jacek is a collaborating artist with Anise Gallery in London and curator at Studio CS and Fondazione Marta Czok in Italy. Jacek has his own website where you can find out more on his current projects and exhibitions.

Alongside his work in public and interdisciplinary art, he has developed an extensive portfolio of theatre work through his performance company Elastic Theatre. Here he has created and directed all of its internationally acclaimed projects, in contexts and UK venues including the Riverside Studios, Southwark Playhouse, Greenwich and Docklands International Festival, Tête á Tête: The Opera Festival, St James’s Piccadilly, Arcola Theatre, Spitalfields Music Festival. Venues outside the UK include; Theatre 145 (Grenoble), Pavé D’Orsay (Paris), Teatro Sala Uno and Teatro Abarico (Rome), RESEO (European Network of Opera and Dance Education), NOA Opera (Vilnius).

Elastic Theatre’s public recognition includes the Fringe Report Award for Best Theatre Company, presented to Jacek at Leicester Square Theatre. It is also recognised by several major arts awards by funding bodies such as the Wellcome Trust and Jerwood Charitable Foundation, as well as a feature on the US publication Theatre Today, amongst the 300 most representative theatre companies across the globe, and numerous press reviews and features, including The Times, The Daily Telegraph and Time Out.

Jacek’s work with Elastic Theatre was also the subject of the PhD awarded to him in 2014. Entitled "Making Theatre Elastic". It explores the company’s body of work in relation to the panorama of post-dramatic theatre, with a particular focus on its eclectic combination of performance disciplines, its versatile approach to dramaturgy and its flexible responses to site.

As an academic, he has worked extensively since 2002 in a wide range of higher education institutions alongside London Met, including; the National Centre for Circus Arts, East 15 Acting School, Arts Educational, Bath Spa University and Teatro Integrato Internazionale in Rome. He was a lecturer in dance history and art theory at the London Contemporary Dance School, where he co-designed and delivered the Dance Arts Literature Ideas programme. In 2008, he became a senior lecturer at London Met, whilst continuing to be in high demand as guest lecturer and voice tutor, most recently with Royal Opera House Education. Jacek has published on the subjects of art, voice and performance. He is the London correspondent for Exibart international magazine and is a member of Tate Exchange Research Steering Committee at Tate Modern.

Jacek is Deputy Director of CREATURE - The Centre for Creative Arts, Culture & Engagement - where he leads the Public-Face Research Group.He is a member of the Tate Exchange Research Steering Group at Tate Modern.

Making theatre elastic: a practice-led PhD on performance research with Elastic Theatre, focusing on the body of work produced between 2005 and 2011

Abstract from Dr Jacek Ludwig Scarso's full thesis:
The present discussion is based on my performance research with Elastic Theatre (originally named Vocal Motions and also known as Vocal Motions Elastic Theatre), a company that I founded and have directed since 2001. A specific focus is placed on the body of work produced between 2005 and 2011, which comprises six performance outputs: Ophelia’s Song (2005-2006), Medea Made Medea (2007), The Magdalene Mysteries (2008), Medousa (2009), The Passion of Saints Sergius and Bacchus (2009) and Baroccata/Baroque Box (2010-2011). These productions have been informed by an overriding ethos, which is presented and reflected upon in the following chapters. I refer to such ethos by using the term elasticity, which I define in the Introduction, contextualising this within the broader spectrum of contemporary tendencies in performance practices, with particular reference to the notion of 'post-dramatic theatre'.

This concept of elasticity is presented in relation to three aspects of my productions: respectively, the combination of performance disciplines (Chapter 1), the dramaturgical approach (Chapter 2) and the staging choices made (Chapter 3). Across these chapters, I provide a contextual overview of the aspect treated, a discussion of my methodology in relation to this, and a reflection on my findings, referring to the concept of 'liminality'. My Conclusion draws my reflections together, emphasising the original contribution that my work has represented in the field of contemporary performance.

Each of my outputs is documented in the Appendices, through written, photographic and video material. The Appendices also include a chronological overview of the productions discussed, a summary/glossary of my methodological strategies and a brief presentation of the company’s history.

Dr Jacek Ludwig Scarso
Reader in Art and Performance
The School of Art, Architecture and Design