Together, Fergus Feilden and Edmund Fowles are award-winning architectural practice Feilden Fowles, which they founded in 2009.  They both also lead undergraduate Architecture Studio 11 on The Cass’s BA Architecture.  The design competition the practice has won is for a mixed-use development on the University of Oxford’s Green Templeton College campus.  Their winning design triumphed over six other shortlisted architecture practices.

The brief called for concept designs for a modern development which optimises the potential of the site, whilst embodying the college’s ethos of ‘making the world a better place to live in’ and contributing positively to the architectural heritage of Oxford.  The new project will comprise a mixture of graduate accommodation and academic spaces serving the college community.  Feilden Fowles’ winning proposal is for a calm, reflective and legible building that will dignify the pursuit of academic enquiry at the college.

Edmund Fowles, Director of Feilden Fowles commented:  “The college campus has many of the qualities of the picturesque, comprising a sequence of interconnecting and yet irregular quads and gardens, presenting a series of revelations; an unfolding drama of spaces as one moves through the campus.  Our approach was simply to imagine a continuation of this walk through the college, to discover three more outdoor rooms or ‘hortus conclusus’ that offer a combination of more civic and collective functions but also quieter, more reflective spaces”.

Feilden Fowles architectural practice specialises in delivering socially and environmentally sustainable buildings across a variety of sectors, and aims to make architecture that is rich in character and distinct in identity.  Projects are inspired by local vernacular, and apply innovations in sustainable technologies and construction techniques to existing and proven typologies.

The work of the practice has been recognised with a number of awards, including a 2017 RIBA London Award for Feilden Fowles’ Studio, Waterloo, and a 2014 RIBA National Award and 2015 Civic Trust Award for The Lee Centre, Ralph Allen School.  The practice received the inaugural Young Architect of the Year Award in the American Institute of Architects UK Excellence in Design Awards in 2015, and BD’s Young Architect of the Year Award 2016. 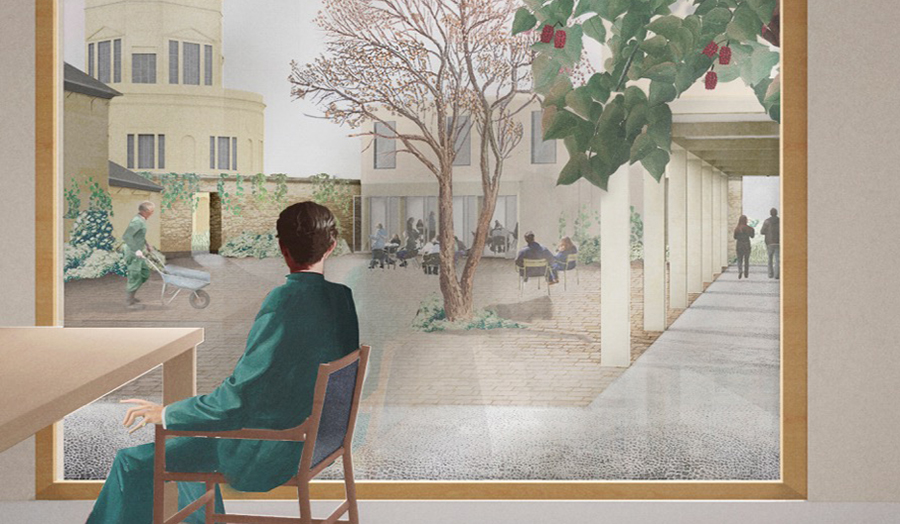