Talking Textiles News from the School of Art, Architecture and Design

Oliver Morgan, second-year Journalism BA student, interviews course leader for Textiles at London Met, James Hunting, about the success of the course and the industry.

It’s official: The Textiles BA course here at London Metropolitan University is the fourth best in the UK, according to the Guardian university league tables 2022.

The rating is based on a multitude of factors, ranging from student feedback and surveys, funding per student, class sizes, academic success, graduation to employment rates, and how courses responded to remote learning during the pandemic.

Course leader for Textiles, James Hunting, believes the success of his course is down to one thing: putting students at the heart of everything. "What we have that other universities don't have is that our approach is totally focused on the student," he said.

"It's totally focused on their aspirations and what they want to do because the textile environment is vast."

Textiles play an essential role in our lives. From the sofas and chairs we sit on to the carpets and rugs we walk on and the clothing and shoes we wear, the presence of fabric is ubiquitous.

The sector around fashion and fabrics is huge. The UK's textile industry had an estimated revenue of £4.2 billion in the year 2020, which marked a growth of nearly 4% from the previous year.

Hunting believes that in education, listening to students is key, and lecturers need to ensure they understand who the student is and what they want. "Lecturers will never be able to empower people if they don't listen to them," he says, explaining why his course has got a "really strong reputation" within the sector.

The mix of students, what they achieve and what they do when they graduate has made colleagues in other universities envious, he said.

"We are an exceptional course, we are an unsung course and we're a hidden gem within London," he says, "We're quite a small course but we have much more impact than our size would lead people to imagine."

Students agree. Nanci Lynch is a third year student who stated that she feels mentored and scaffolded rather than experiencing top-down teaching.

All the projects are tailored around student aspirations, there's no brand or house style, said James. Adds Lynn Outlaw, a third-year Textiles student: "We have the freedom to find our individual pathway, and to find our creative voice."

The facilities on the Aldgate campus allow students to be creative and explore their passions for textiles. "We have a weave room, a knit room, a textile print room as well as working studios," says James, "When students are inducted they can then access it all, we have a generous open access policy."

Every project in the second and third year is a live project that has an exterior partner who comes and gives tutorials and critiques student work, James said. "Most of the projects are competitive and have a professional outcome at the end of it."

The course doesn't have an attrition rate of people leaving halfway through. "We kept nearly every student engaged over the whole of lockdown," James said proudly. This is largely due to the approach to remote learning taken by the course. "We rewrote the curriculum so making was less of a pressure so students who didn't have facilities could still progress, work and feel part of a community."

The success of the course during isolation largely contributed to the high ranking achieved. "During lockdown we'd have disco music, we'd have quizzes, we'd have chatting and discussion." James said, "We sent out mini print rooms for the printers, knit machines for the knitters, weave looms to the weavers and most importantly we listened to the student and worked round their feedback."

When it comes to post-graduates, more and more are doing a masters or going into teaching. There are also a large number of students who set up their own business and work closely with the Crafts Council and Cockpit Arts.

Over the past few years there has been an existential increase in demand for green, sustainable fashion. "On sustainability there can only be an emphasis," believes James, "We can't keep going as we are. Cotton is the worst, it's the greediest for water and greediest for pesticides." Another focus is on dyeing, with a move to air dyeing being preferred to avoid mass water consumption. "Dyeing has a huge impact on the water source and is very polluting."

During the course the students have to do an impact form when they're doing a project to determine where they source material from and, more importantly, what happens after its life has ended.

James believes his students can make a change from within the industry by being responsible and leading from the front on environmental issues. The course itself has been cutting down on sampling. "It has to be a conscious thought rather than just making stuff for the sake of making it and it's understanding what's good and responsible fabric and what isn't."

If you are interested in studying Textiles at London Met visit the course page for more details. 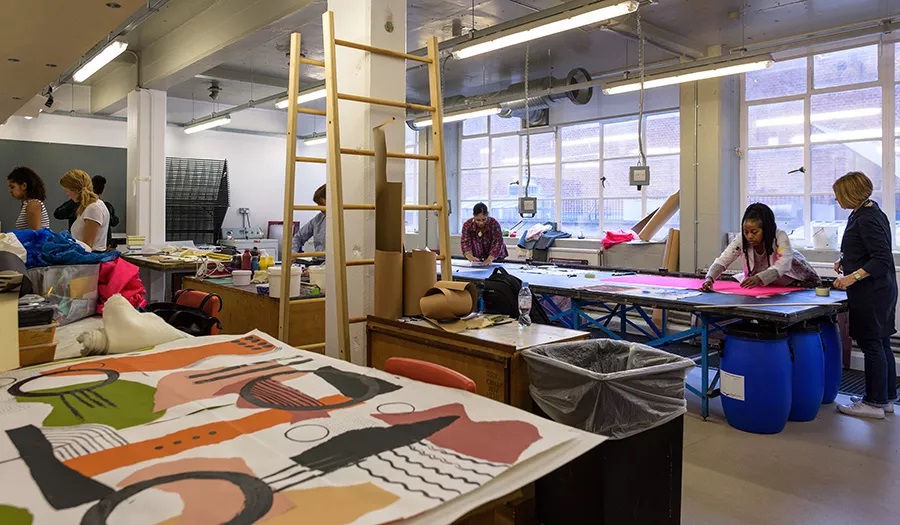