Art, architecture and design projects Shelter for the Sharks The Projects Office

The Sir John Cass School of Art, Architecture and Design has been working in Hayes since 2012 when the School was asked by John McDonnell MP to propose and establish art and architecture projects in the area. Since then, students studying courses in architecture, fine art, spatial design and urban planning, jewellery and silversmithing, and photography have all contributed to the project, working with people and sites in Hayes. Taking on local groups as their clients, Cass students have worked closely with them to produce projects that are self sustaining and self cultivating. So far, Hayes clients have included local housing estate residents, young people not in education, employment or training, and volunteers on a Play Ambassador scheme. Encouraging local ownership of projects (such as the Austin Estate Sewing Club) has meant that residents have developed projects above and beyond the students' involvement. This has been the aim for all projects.

Cass Architecture Studio 3 has worked in Hayes since 2013 when it began working with the Austin housing estate, running events to encourage community gardening. In 2014 the Studio worked with Hillingdon Play Association to develop their proposals for the estate, and in 2015 the Studio focussed on high street infill sites. This year's work explores the industrial fringes of Hayes, taking a particular interest in the imminent arrival of Crossrail and how it will impact on the urban fabric of the area. The Shelter for The Sharks projects consider the potential for the industrial fringe sites along the Grand Union Canal.

The Grand Union Canal, the artery of the UK's industrial revolution, passes through Hayes town centre to the south of the high street and adjacent to the future Crossrail station, housing estates and industrial areas. The Studio has been working with local canoeing club The Sharks to establish a hub for them in Hayes. Students met with The Sharks' Neal Underwood and Rob Grundy who took the students kayaking along the canal, exploring recently closed factories, housing developments and surprising areas of wilderness.

Following the canoeing trip, Studio 3 explored design options for a shelter where the boats could be stored and groups of children could meet for paddling sessions on the canal. Various locations were tested, with many centering around the area of Shackles Dock, a canal inlet adjacent to the Austin estate in the town centre. Students developed individual projects based on the volume of a single standard shipping container, a tried and tested storage method for kayaks for which The Sharks have obtained funding. All of the proposals offer more than just storage; some invite dog owners to meet, others link into the national long-distance rambling network or offer new views of the lush canal-side flora and fauna. Alongside working with The Sharks, the projects were also discussed with Hayes Partnership Chair David Brough, who introduced the students to local history and current developments in the town. Subsequently, students presented their proposals to David Brough and Neal Underwood as well as local MP (and shadow chancellor) John McDonnell and Thames 21 representative Billy Coburn.

The Shelter for The Sharks booklet documents the work carried out by Architecture Studio 3. All of its projects aim to contribute to communities wider than canoeists and the canal, and to provide sites that can contribute to strategic urban development. The work shows how a shipping container can provide a flexible, low cost, robust and easily transportable module. Cass Projects is now working with the Studio and the canoeing club with the aim of developing and delivering the shelter.

Take a look at the publication. 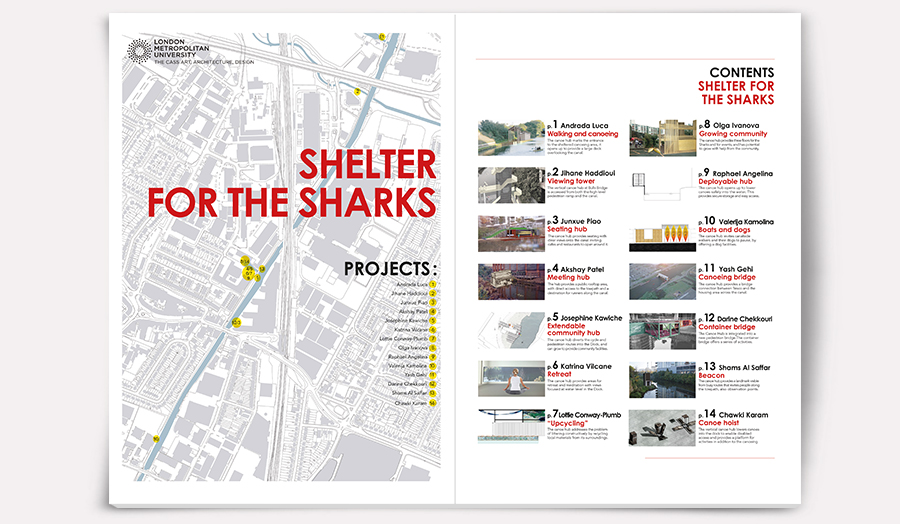