Trump and the FBI

When I began my PhD in the early 1990s I was lucky enough to spend time in the Gerald R. Ford Presidential Library in Ann Arbor, Michigan, and visited the accompanying Museum in Grand Rapids.

The Library, like all presidential libraries in the US, is a repository of every single piece of paper produced by each administration. I held in my hand everything from Henry Kissinger’s original briefing notes on Vietnam as the US withdrew from Saigon in 1975, to a doodle drawn by Alan Greenspan, who would later be one of the most famous chairmen of the US Federal Reserve. It was an extraordinary experience to wade through hundreds of boxes of original documents, piecing together events, often uncovered by the serendipitous nature of archival research. I have been back many times since.

When I visited the Museum, I was astonished to find on display the resignation letter of President Richard Nixon, who, having been impeached by the House of Representatives, left office before he could be removed by the Senate. It is probably the shortest resignation letter in history, but its power is immense, even now.

Both the Library and the Museum attested to the power of democracy, the checks and balances that operate within the American political system, and the accountability that history brings.

I was reminded of both this week as I read the revelations about the Trump presidency in Maggie Haberman’s forthcoming book ‘Confidence Man’, and then watched in amazement as the FBI raided Trump’s Mar-a-Lago residence. Just take a minute to let that sink in – a man who was entrusted to uphold the law in the highest office in the US was raided by the FBI.

Haberman, who is an excellent New York Times journalist, suggests that whilst Trump was in the White House he would often tear up documents, drafts and memos after reading them, flouting presidential record-keeping laws (there are reports of staff sellotaping them back together out of his sight so they could be kept and stored as the law decrees). Haberman also has photographic and anecdotal evidence that suggests Trump flushed official papers down the toilet - discovered later by repairmen who were called in to fix the blocked drains.

The raid on Mar-a-Lago in one sense is not surprising. In February the National Archives raised concerns with the US Department of Justice concerning the return of 15 boxes of White House files which contained classified national security information that Trump had illegally taken to his Florida resort when he left office. All presidential papers should be handed over to the National Archives to be processed and stored in a presidential library when a president leaves office.

The raid this week by the FBI (whose Director is a Trump appointee), authorised by the Department of Justice, appears to be a continuation of this concern around Trump’s handling of sensitive and classified information.

It is difficult to know at this point exactly what they were looking for, but they must have had credible information to launch such an investigation. The FBI is acutely aware of the criticism it experienced when it announced it was investigating Hillary Clinton’s email accounts a week before the 2016 election, something that may have helped swing the election to Trump. The fact we are 90 days away from the midterm elections suggests the FBI knows something. To get a warrant, there has to be credible evidence of a crime for a judge to grant it.

If Trump is found to have mishandled documents, he could face a three-year jail sentence (though that is unlikely to happen). More relevant for many is the fact that it could bar him from running for political office, thanks to a law Trump himself introduced whilst president.

This has also come at a time when pressure is building on the ex-President elsewhere. He famously pleaded the Fifth in court this week – the right to silence guaranteed by the Fifth Amendment to the US Constitution – as prosecutors in New York examine a range of alleged tax and bank fraud allegations. In a separate case, prosecutors are ploughing through Trump’s tax returns in the search for financial irregularities.

Trump is also being investigated for seeking to influence the outcome of election results in Georgia, and a selection of court cases are pending on alleged sexual misconduct. Let us also not forget the small matter of the Congressional hearings into the Capitol riot on 6 January, 2021.

Many political commentators are calling the raid a gift for Trump – he is already raising money off the back of it and he continues to have an almost messianic following from his supporters and a Republican Party that either exalts him or lives in fear of him. Already followers are saying, like Trump, the FBI will have planted evidence. The Deep State has revealed itself.

It is difficult to know where this will go. When Gerald Ford became president after Nixon’s resignation, he famously said ‘Our long national nightmare is over. Our Constitution works.’ Only time will tell if the same can be said for this very difficult moment for the US political system, and the fragile nature of American democracy. Whatever happens, the legacy of Trump is destined to resonate for years. 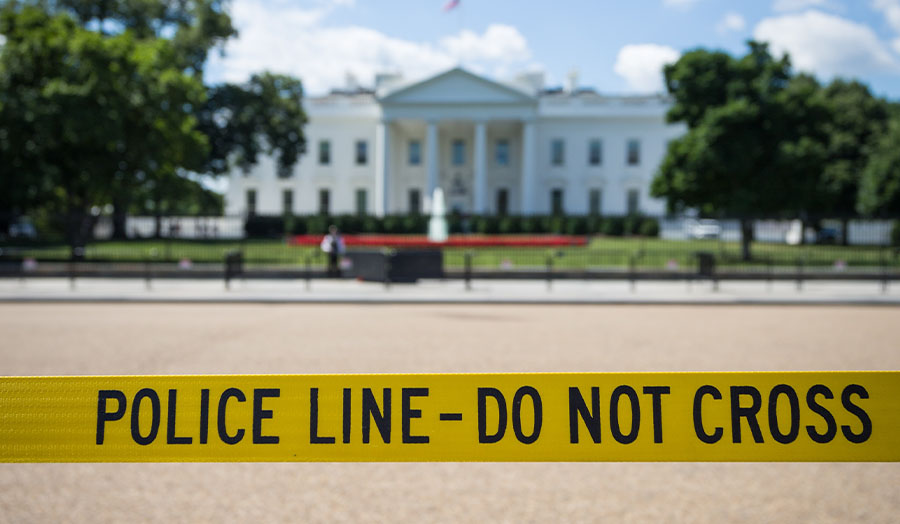