The life and death of 'Mad Vlad'

Associate Professor of Journalism Wendy Sloane comments on the life of Russian nationalist Vladimir Zhirinovsky, whose 1991 presidential campaign she covered as a Moscow correspondent.

After more than a week of speculation, Russian nationalist Vladimir Zhirinovsky was finally confirmed dead yesterday. Once a legitimate contender on the Russian political stage who came third place in the 1991 presidential elections with eight million votes, he became prominent in the Russian Duma, or parliament. He also was a striking figure of derision both at home and abroad for his clownish antics and outlandish claims, although he nonetheless attracted a solid and immensely loyal fan base.

Zhirinovsky, who was 75, was the leader of Russia’s Liberal Democratic party and an admirer of both Vladimir Putin and Donald Trump. With a bristling crewcut and yellowing teeth, the far-right politician was well-known not only for his xenophobic, homophobic and misogynistic views but also for his colourful personality. He often was the first to put into words what many Russians who longed for the glory days of the Soviet Union were feeling. In the Duma he was not scared to voice those opinions to anyone who would listen, no matter how politically incorrect they sounded.

Zhirinovsky made headlines worldwide in 2014 for calling Ukrainian women “nymphomaniacs” and threatening to have his aides rape a pregnant Russian reporter. At home, he attracted attention not only because of his outrageous one-liners but also for his own specific brand of arch-nationalism. He longed for the day "when Russian soldiers can wash their boots in the warm waters of the Indian Ocean", he famously said, voicing his expansionist dreams, and he consistently blamed the West for Russia’s woes. “For some reason, the West became scared and decided to destroy this country. But if a third world war is unleashed, [they know the] Russians have nuclear weapons,” he told me during a perhaps prophetic interview in the 1990s, when I accompanied him on his presidential campaign trail. Fifteen weeks ago, he publicly predicted the exact date Russia would invade Ukraine, much to the reported annoyance of Putin.

The seeds of Zhirinovsky’s nationalism blossomed as a child, he told me then. Growing up as a Russian in Soviet Kazakhstan he always felt an outsider, claiming that Kazakhs always received preferential treatment, whether it came to obtaining a better state-owned apartment or getting better marks in school. “A Russian would answer a question [in school], and he'd get a D,'' he said. “A Kazakh would answer in the same way, and he'd get a B. Those wrong policies against us always existed.'' Kazakhs were not the only targets of his hatred. Zhirinovsky was an equal-opportunity xenophobe, with a disdain for any group that threatened the Russian position on top of the heap. Instead of Russian as conqueror he advertised himself as Russian as victim, a lone cry in the wilderness that attracted legions of admirers. He especially disliked the non-Slavic groups in the former USSR, such as Chechens, Georgians and Jews.

“Seventy percent of all people in radio, television, newspapers, and magazines are Jews,'' he told me. “That does not make Russians very happy.”  Zhirinovsky’s father was a Jew himself from Kostopil in western Ukraine, something his son accepted or denied, depending on his mood (his father’s name, incidentally, was Volf Isaakovich Edelshtein). He told me that his father had died in a car accident when he was a small boy; other reports said his parents divorced and that his father subsequently emigrated to Israel.

My most enduring memory of Mad Vlad, as many reporters called him, was during his campaign, when we were travelling in the back of his Chaika, a black Soviet luxury car reserved for members of the Soviet elite, with his entourage of PR gurus and bodyguards. We stopped at a roadside restaurant for a meal and before we began eating he stood up and proposed a toast. “Russia for Russians!” he said, looking at me as he raised a glass of mid-quality Russian red. I refused to drink, which caused a lot of consternation. A few days later, an article appeared on the front page of Pravda, with the headline: “What’s that poison in her glass?”

Zhirinovsky, who claimed to have had eight vaccinations against Covid, evidently died of the novel coronavirus. Whether he actually had eight inoculations or not, the claim is not surprising. Whatever he did, whether it was to rant about non-Russians, threaten reporters or deny his heritage, he never did by half. 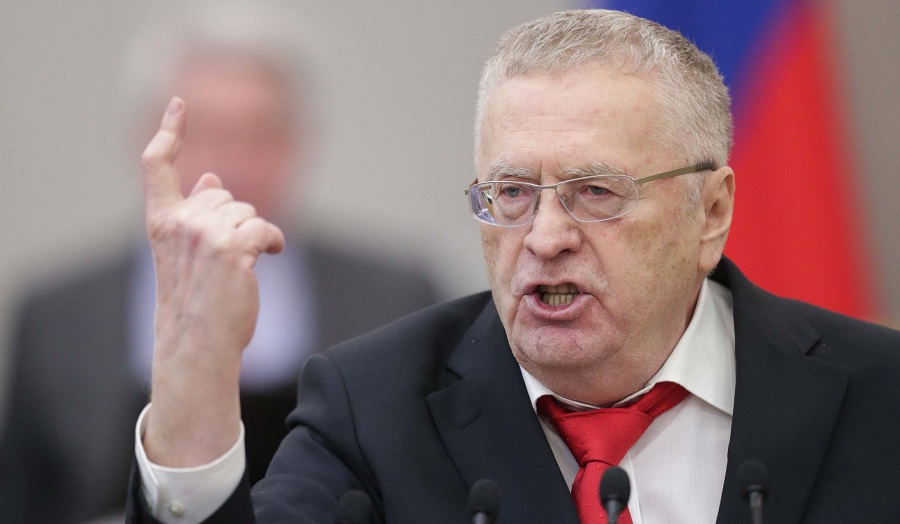