Getting a UK visa might be harder than leaving Ukraine

Associate Professor in Journalism, Wendy Sloane, comments on the bureaucracy at the heart of Britain’s resettlement efforts.

Last week, Iryna Shevchenko put a frantic message on her local NextDoor app, asking for a temporary home for her best friend Natalya and her two daughters, who fled the northeastern city of Kharkiv in Ukraine when the Russians invaded.

After fleeing bombings, extreme cold, and having nothing to eat they are now fighting another battle – with the UK bureaucracy.

“They spent five days in Kharkiv without food, without water, without electricity. They finally decided to escape by car to Germany with husband, mother-in-law and cat,” said Iryna, 43, who is best friends with 45-year-old Natalya, a stay-at-home mum.

“Her mother-in-law and husband stayed in Ukraine because they cannot leave the country; he is not allowed to leave and she is scared and elderly – she is 84. It is hard for them, especially at the German border, you have to wait in a queue for 10 hours or more,” said Iryna, who works in a vaccination centre in London, where she has lived for 20 years.

Natalya and the two girls, aged 13 and 16, eventually were joined by Natalya’s grown step-daughter, 26. Now all four are stuck in Germany, sleeping on the floor of a refugee centre. A German who had initially offered them accommodation changed his mind when they said they hoped eventually to return to Ukraine, and they are running out of money.

“He became so aggressive that he told them to leave his house,” said Iryna. “Then a lady in Essex offered them a room but was too scared to upload her passport information onto the Homes for Ukraine site. Finally, we found a place for them in a flat in London. But we are number 72,000 or something in the queue. And we haven’t even finished uploading everything yet.”

The Homes for Ukraine scheme, in theory, is an easy solution to help accommodate the growing number of refugees fleeing to neighbouring countries, which totals around 4 million, or about ten percent of the entire population of Ukraine, according to the UNHCR.

The idea was simple: the government offers visas, while accommodation is provided by UK-based hosts in their own homes. Hosts receive a tax-free “thank you” payment of £350 monthly from the government, regardless of how many people they house, while the Council gets a £10,000 payment for every refugee.

“I urge people across the country to join the national effort and offer support to our Ukrainian friends,” said Cllr James Jamieson, Local Government Association (LGA) Chairman, when the scheme was officially launched on 14th March. It was not open for applications until four days later. “Together we can give a safe home to those who so desperately need it.”

But the scheme has been beset by myriad obstacles, making it impossible for most people to get onto it. The intense almost Kafkaesque bureaucracy that surrounds it – including, remarkably, no application forms available in Ukrainian – means that very few people have actually managed to get visas, despite the fanfare surrounding the programme.

As of Tuesday, an estimated 200,000 UK-based people have registered interest in becoming hosts for the scheme, which is managed by the Department for Levelling Up, Housing and Communities (DLUHC). But it’s unclear how many Ukrainians have actually made it to the UK. GOV.UK has said only that 25,000 visa applications have been submitted, while some reports say that only 2,700 visas have actually been granted.

Instead, those that hope to immigrate here are waiting in refugee centres in Germany, Poland, Moldova and elsewhere or, even worse, cowering in war-torn areas of Ukraine, risking their lives while they wait for the UK to sort itself out.

“Oh, my word! This is the most muddy process I have seen for a long time. I have just spent two hours putting together one application for my guest and have to do another for her son,” said would-be host Trish Mytton.

“The wording of the application is not crystal clear, some of the questions are ambiguous, and as for guidance on the documents we need to upload, well, it’s a misuse of the word guidance.

“My guest is an educated woman who speaks English really well. It must be disastrous for guests who have limited knowledge of English of nor knowledge at all.”

English-only forms are “just the way it’s organised”, a man who described himself as a “call centre worker” at the UK Visa and Immigration hotline told the London Economic.

“I know many Ukrainians speak very good English, so that shouldn’t be a problem,” he said, adding that older people who don’t must “find a younger person to translate for them”.

What about reports saying that five people in total are working on more than 100,000 applications? “The problem is that there is so much nonsense online; it’s hilarious. That’s the problem in this day and age. Everyone has an opinion, and opinion turns into fact,” he said.

He also declined to confirm or deny other reports that the call-centre is staffed primarily with people working from home, which some have said has contributed to its inefficiency. He admitted: “There are thousands of people waiting for visas, and there is a backlog.”

Some say the backlog exists because the scheme is purposefully complex – to keep migrants out.

“The whole process is complex, hard to understand, and with no clear timetable,” said would-be host Rachel Stevens. “It is dependent on so many factors, including getting an advanced DBS (Disclosure and Barring Service) check for every adult in the host family, and an inspection of accommodation. Our local council doesn’t get back to emails. I feel so hopeless and helpless.”

There are also conflicting messages concerning the visa system. On Tuesday, the government said that visas will only be granted once DBS checks have taken place, although initially it said those would be carried out later, once refugees had settled into their new homes. Many councils are unaware of the change.

On Tuesday evening, GOV.UK sent an email to those who had applied to become sponsors, acknowledging that the system was far from perfect. “Many people have told us that the application process needs further refinement, and the Home Office have committed to taking steps to do this,” it said. It did not elaborate.

Most Ukrainians leaving their country are women and children, as men between the ages of 18 and 60 must stay and fight, if they are able. Those who are temporarily displaced are prime “targets” for sex trafficking and slavery, according to the BBC, which recently did an expose on the Polish-Ukrainian border.

Lisa Perkins, 49, lives in a three-storey townhouse in Tipton in the West Midlands with her husband, a 55-year-old warehouse supervisor. “He was in Germany at the end of the Cold War when the Berlin Wall came down, and he feels very strongly that help is needed for these people, and so do I,” she said. “We applied as soon as the scheme came out.”

But things did not go according to plan. Perkins wrote to Homes for Ukraine that the refugee she is sponsoring, a 19-year-old Ukrainian girl, was sleeping with four others in a shipping container in Germany. The teenager was having trouble coming to the UK as she did not have an international passport, although she does have a Ukrainian biometric one.

“The visa processing centre is 3.5 hours away in Dusseldorf, and there is no train station where she is, only a minor bus service that would mean her stopping over with no place to stay. I can get her a flight from Frankfurt on Sunday morning to Manchester, and we also have a German lady who can take her to Frankfurt airport,” Perkins said.

Despite repeated emails and calls, her only answer has been an automated response, saying: “If you do not have a valid Ukrainian passport which can be used for international travel you must attend an appointment at a visa application centre to provide your biometric information and progress your application.”

Councillor Kerrie Carmichael for Blackheath and Leader of Sandwell Council has since taken up her case, sending a letter to local MP Shaun Bailey of West Bromwich West. “From watching the news last night – I am aware that the organisations that are helping out in Europe are concerned about sex traffickers and as I understand it Lisa is very aware of the young girl’s vulnerability she is trying to help,” Cllr Carmichael wrote.

Erdal Dogan, Cabinet Member for Stronger and Safer Communities at Haringey Council, believes that the current system needs to be as welcoming as possible. “We should have an easier visa system for Ukrainians who come to join their family in the UK or who are seeking a safe place for themselves,” he told the London Economic.

“Britain has been open for refugees and migrants who have experienced aggression in their home country, and Britain has benefitted from these refugees and migrants who support the local economy and bring a lot of talent to support our industries, the NHS, construction and more. If you look at Britain’s past, present and future, migrants have always contributed to Britain in a positive way.”

Cllr Dogan came to the UK in 1991 as a refugee himself from Turkey at age nine. “I arrived in this country as a child refugee and now I’m a Councillor, which shows that I have made a positive contribution to the borough,” he said. “I am raising my children and my family in the borough, and they attend a community school which has a very diverse demographic. They are learning to engage with everyone. Diversity is power, and we need to celebrate it.”

There is some isolated optimism. Host Angelika Richards, who lives in Muswell Hill, north London, heard Tuesday that a social worker would arrive to look at her home and later carry out a DBS check, as she will be taking in a mum and her teenage son. She only signed up to the scheme on March 22nd. “My experience has been positive so far,” she said.

But Iryna is still worried about visas for her best friend Natalya and her daughters, who are stuck in limbo in Germany.

Last Friday, Russian President Vladimir Putin announced that he is changing tactics and will concentrate his efforts on trying to “liberate” the Donetsk region of Ukraine, where Iryna is from. Russians now control more than half of the area, which along with the Luhansk region make up the breakaway eastern Donbass.

“My town is such a big problem. The soldiers just started shooting at the trains and all were cancelled. So nobody has escaped from there. I am just praying for them,” said Iryna, who also has relatives who are hiding in Kyiv. “Every morning I have to contact them just to make sure they are alive.”

As her own family cannot make it out of Ukraine at present, Iryna is praying that at least Natalya and the girls will get permission to come to the UK. “I hope they will get a visa. That’s the main thing at the moment,” she said. “But I don’t know when.”

This article first appeared in the London Economic. 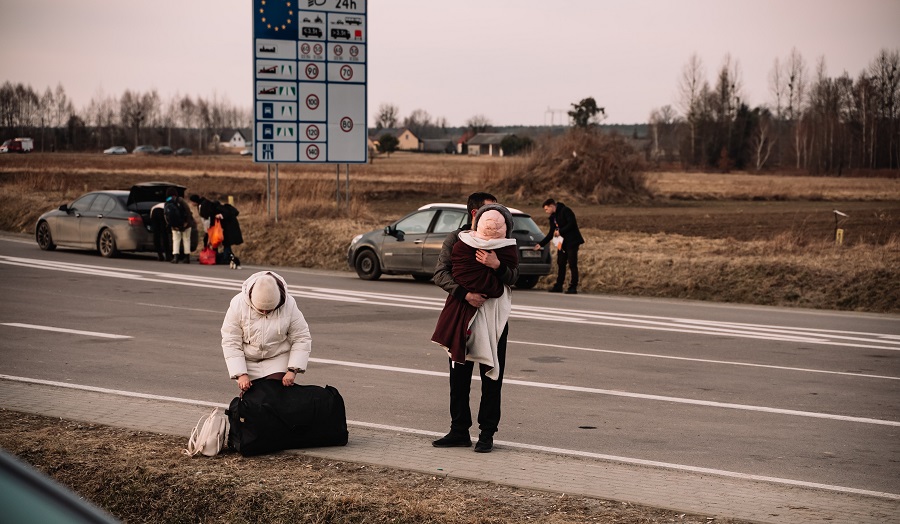 Image by Kevin Bückert for Unsplash.