Why I’m taking in Ukrainian refugees

Associate Professor in Journalism, Wendy Sloane, knew that her mother and uncle were evacuated to safety during WWII. Now, despite a strange discomfort, she finally returns the favour.

It was 1940, and my mother Davina was about to become a refugee. When the war broke out, she was just five. Her father, Moshe, was a tailor with a full-time job in Oxford Street, who also made clothes at their home in Ilford, Essex. They lived upstairs; the ground floor doubled as his workshop and showroom, where her mother, Sadie, sold silky dresses and elegant suits. Her big brother Gerry was six years older.

My mum has fantastic memories of those early years, before she turned six. Her parents would take her to Petticoat Lane on Sundays, where her dad would buy bagels, pickled herring, rye bread and other delicacies. If her behaviour was impeccable – meaning she hadn’t thrown up on the bus – he’d buy her a gherkin they would fish out from the bottom of a barrel, sold by Orthodox Jews like themselves.

When the bombing started, my mother and Gerry were evacuated to Ipswich, where they spent a month staying with two different families. "The first family was awful. I had diarrhoea and they refused to clean me up. I had to do it myself," recalled my mum, now 88, in a recent phone call with me from her home in San Diego. "They had children of their own. I didn’t understand it."

Things quietened down in London, and my mum and her brother returned home to Ilford. But soon their house was bombed. Bombings were nothing new – my mum said they’d hear the alarm and run to the Anderson shelter in the garden, which had two camp beds, already made up – but this time, the bomb hit its target. The family’s dining room and scullery were hit and the windows shattered, scattering glass everywhere. "My Uncle Mark had already sent his two children to America and he kept urging Mum and Dad to do the same," she said, "but they didn’t want to."

The shards of glass, which landed across my mum’s teddy who was napping in the front room, changed her parents’ minds. In September, 1940, the two children were evacuated to the United States through the government-sponsored scheme CORB (Children of the Overseas Reception Board). They became members of the Sea Evacuees, children invited to safety by foreign governments, and lived with foster families in Boston and Washington DC for the next six years. Amazingly, she and her brother were taken off the  SS City of Benares, which was torpedoed by the Germans and sunk, right before it set sail and put on another ship. She didn’t return home until she was almost 12: she recognised her father only by the smell of his cigars.

In the next few days – or weeks – my family will be hosting a Ukrainian mother and five-year-old son. It hasn’t escaped me that he is almost exactly the same age as my mum was when she was evacuated. His father is not allowed to leave Ukraine, and he is also leaving behind the family dog, friends, relatives and a much-loved nursery school. His town, just outside Kyiv, has already been hit by five bombings, and I wonder how much trauma he has suffered. Funny how my mum fled the Nazis, while Putin is citing Nazis as a pretext to invade Ukraine.

Homes for Ukraine, which opened on Friday, helps coordinate Ukrainians fleeing the Russian invasion with people living in the UK who want to provide them with refuge. Although an estimated 90,000 people have signed up as hosts, critics say the scheme is plagued by bureaucracy. In particular, until today there has been no coordination to match Ukrainians up with families, meaning that those with friends and family in the UK might have a realistic chance to come here, while others do not.

"There is no formal central system of matching the people on the register to those in need, which is pretty extraordinary," Labour MP Lisa Nandy said in an interview with the Observer. "When you add in the excessive layers of bureaucracy – the lengthy forms and the documents you need to prove your identity and residency – the barriers make this scheme completely unworkable." The amount of red tape involved is so off-putting that potential hosts could eventually withdraw their offers, others say, although as of today the website has changed its wording. It now says: "You’ll be paired with someone needing somewhere to live if your application is successful."

We were matched up thanks to a Facebook post in a neighbourhood group, which asked if anyone would take in a mum and her son. Yuliya, the post’s author, has been living in the UK for a decade. I contacted her and invited her over. Later, she texted me. "It is a difficult time but her husband is insisting they leave for their safety," she said. "At least she has me close by. We have been best friends for almost 20 years and knowing she will be staying with such a nice family, I hope it will all be okay."

As we await news of our guests’ visas through Homes for Ukraine, the irony that other refugees and asylum-seekers may not qualify for the scheme has not escaped me. People of colour who live in Ukraine are facing discrimination when trying to flee, according to reports, and have been told in countries like Hungary that they are now "third-party nationals" and have 30 days to move on. And what about refugees from other countries facing war and starvation? There is no "Homes for Afghanistan" or "Homes for Yemen" scheme.

The difference, some say, is that the majority of Ukrainians will choose to return home when the war is over, therefore their presence is temporary. Others say it’s because Ukrainians are – let’s face it – largely blonde and white. "They seem so like us. That is what makes it so shocking. Ukraine is a European country. Its people watch Netflix and have Instagram accounts, vote in free elections and read uncensored newspapers," wrote Daniel Hannan, Baron Hannan of Kingslere, in the Telegraph in late February. His commentary was branded a "racist trope" by the website Middle East Eye.

My mum eventually did go back to the UK, but she didn’t stay long. After living with three different families in the States, she was worried about returning home to live with parents she no longer knew. Her parents never went to university; her father fled the pogroms in Lodz, which was then part of Russia, in the beginning of the century and his education ended when he was seven. But when her last foster mother got her a university scholarship when she turned 18, my mother went back to the States – and never left. My two brothers and I grew up there; I moved to London as an adult.

These days, I am busy making preparations for our new arrivals to London, including buying a blue kiddie toothbrush, English-language children’s books, a plastic Spiderman, a blue car and a matching truck. Two of my children, who are teenagers still living at home, are excited about finally having a baby brother, for a few months or a few years. I am finally returning the favour.

This article first appeared in The London Economic. 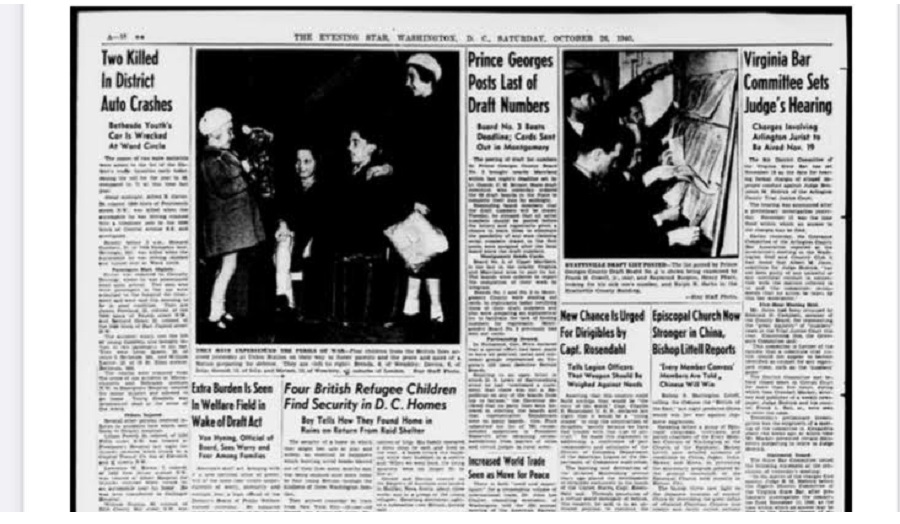 Photo: an archived page from the Evening Star, Washington, showing Wendy's mother arriving in the US as a child. The headline underneath reads 'Four British Refugee Children Find Security in D.C. Homes'.