Dr Jon Tandy discussed his research on the processes that happen in high-speed collisions in solar systems on the Science Off Camera podcast.

Dr Jon Tandy, Senior Lecturer in Physical Chemistry at London Met, recently appeared on the Science Off Camera podcast to discuss his research, which explores the processes that happen in the first fractions of a second when objects in a solar system collide.

The podcast, hosted by Application Scientist Sebastian Remi, focuses on the research and impact of scientists around the world, and how they use imaging and spectroscopy in their work.

Despite his work focusing on what happens in space, Dr Tandy explained that he primarily investigates high-velocity impacts through simulations conducted in a lab.

He said, "what my work is really trying to do is understand the physical and chemical processes that happen during very high-speed collisions on dwarf planets or moons, particularly in our solar system but also potentially beyond that. We know that these collisions are very frequent, we have lots of evidence from cratering on various different bodies, and actually, that’s one way that scientists can date the surfaces of bodies, by looking at the degree of cratering.

"Most recently I’ve been interested in observing the big flashes of light you get with these high-speed collisions between objects. In space, these are typically in the order of 20km per second – these are really fast, really energetic processes that are happening. In the lab, we can’t typically get quite that fast.

"I have a really great collaboration with some researchers at the University of Kent, where we use a light gas-gun to accelerate particles really fast, in the region of 7km per hour, using compressed hydrogen. The physical phenomena you can observe from these kinds of high-velocity impacts is quite different, and it’s partly to do with the shockwaves that the collisions generate."

He spoke about the importance of doing experiments at different scales to better understand how lab-based experiments might translate to objects in space, which he says is a "constantly developing process - it’s not just that if the objects colliding are twice as big, the flash will be twice as bright."

Dr Tandy and his colleagues have recently published new research which is mostly focused on ices, which are prevalent in the solar system in various different places. "We were doing some experiments looking at the impact flash and its brightness, as well as the decay of that flash which can tell us quite interesting information about the behaviour that’s going on in these impacts," he explains.

"We were also able to mix some of these ices with regolith to simulate the chemical compositions of the moon and Mars, that matches what we know their surfaces are composed of. This showed quite different behaviour in the impact flash."

You can listen to the podcast here. 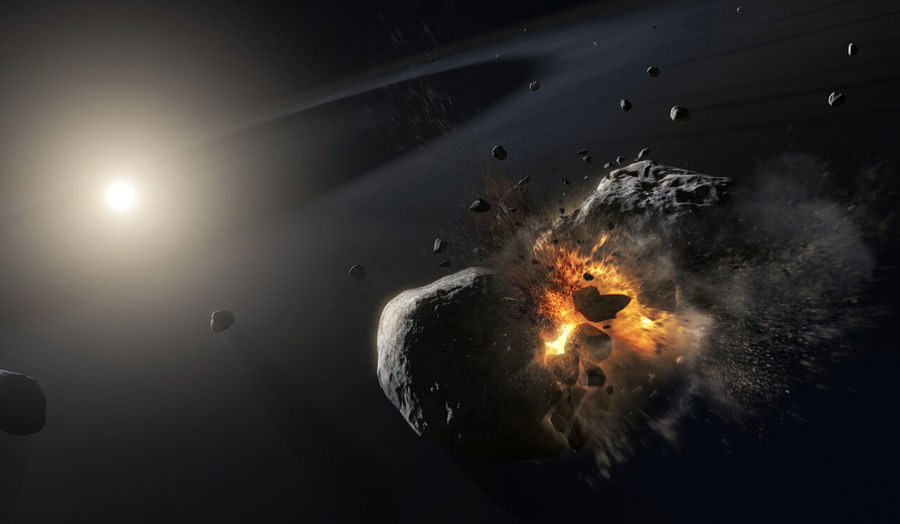