Time to lift the ban on asylum-seekers finding paid employment

Lifting the ban on asylum-seekers accessing paid employment would help to improve both their lives and the UK economy, writes Wendy Sloane, Associate Professor of Journalism.

While the Ukraine crisis is centre stage, the spotlight has fallen on the government changing its policies for Ukrainian refugees fleeing to the UK, allowing them to live, work and claim benefits for three years. But in the wings, the House of Lords has voted to #LiftTheBan on asylum seekers getting paid employment while they wait for their own claims to be decided by the government, which could have a profound effect on all those seeking permanent refuge in this country.

It's up to the House of Commons to now vote whether to allow asylum-seekers the right to work, after six months in the UK. If passed, the change would have a "huge positive impact" on both refugees and the UK economy, according to Refugee Action.

UK laws banning employment for asylum seekers are among the strictest in Europe, if not the world. In the EU, asylum seekers can work if they have been waiting nine months for their claim to be settled; in the United States they must wait only six months. Canada gives asylum seekers the right to work immediately once their claim has been referred to authorities.

"It's not just nonsensical, the ban is harmful to everyone involved. It takes the toughest toll on people seeking asylum, but the UK economy also misses out on tax revenue and much-needed specialists by leaving people frozen in poverty," Refugee Action says on its homepage. It has been working to overturn the ban since 2018; a petition it put forward to have the ban removed garnered more than 180,000 signatures.

As you can imagine, the ban has an enormous impact on refugees' well-being, both physical and mental. These are people who may have been discriminated against, beaten up and even tortured in their own countries, who more often than not arrive in the UK having suffered intense trauma. Denying them the right to work means not only that they struggle to survive, but allows their days to stretch out endlessly, concentrating on the past and worrying about the future, which adds to the anguish they have already faced.

For the past six years I have volunteered at a monthly drop-in for asylum-seekers set up by a London synagogue. I help make and distribute healthy meals and give out period products, toiletries and clothes, all of which is donated by amazing charities such as Bloody Good Period, The Felix Project and Compassion London. As a former Moscow correspondent, I also interpret for those from the former Soviet Union who are recent arrivals and need assistance filling in forms and talking to volunteer lawyers.

Since becoming a volunteer myself, I have met hundreds of asylum-seekers from all over the world, including Eritrea, Iraq, Ukraine, Russia, Syria, Kuwait and even North Korea, among others. Many wait years for their claim to be settled. I have met a few who have been in limbo for more than a decade, if you can believe it.

These refugees are expected to exist on a government hand-out of £39.62 a week to meet their basic needs for food, clothing, transport, and entertainment, and are not allowed to do any paid work to supplement their standard of living. That means a trained doctor from Iraq cannot work in an NHS hospital with a staff shortage, while a nurse from Syria is forbidden from working in a UK care home. And an A-level student originally from Turkey cannot help out her family by doing some paid baby-sitting, or a weekend shift at McDonalds.

While they receive free housing, usually in a hostel or hotel, it is often substandard. Many are not given any cooking facilities at all; others fear for their own and their children's safety in their new surroundings. A disabled woman told me she literally could not access the bathroom with her wheelchair in the first flat the government gave her. After waiting more than 10 hours to be moved she was given a flat with a ramp so steep she required a second person to help her outside; she was forced to stay there for several months as a virtual prisoner. Even worse, when she first sat on the specially adapted disabled shower seat it was so shoddy it broke off the wall; she was rushed to hospital by ambulance.

"A society is judged upon how the dispossessed and the marginalised are treated. And when you treat them without dignity you compromise the dignity of the entire society," mental health worker Deena Kestenbaum, who has been volunteering at the drop-in since it started 12 years ago, told me yesterday as she took a break from working in the kitchen. Deena works with a team preparing dishes - most of which are vegetarian or Halal - from donations from both charities and individuals, and also gives out pre-prepared meals. "I feel very strongly that if you want asylum seekers who come with skills and life experience to become embedded within the community and within society once they are given leave to remain, how is this going to work when they have been treated with such disdain, sometimes for over a decade?"

My interpreting duties could intensify soon, as more and more refugees arrive from both Ukraine and Russia. Yesterday I was asked to phone new Russian-speaking arrivals, as there is already a backlog. That's not surprising: in the first week of the Ukrainian crisis, more than one million refugees have crossed the border into safety, according to the UNHCR, and more are coming. The countries taking in the bulk of the Ukrainians fleeing their country are their neighbours along shared borders: Poland, Hungary, Moldova, Romania and Slovakia. Some are even fleeing to Russia and Belarus, a Putin ally, as they are closest to those countries.

Last week, along with the #LiftTheBan vote, Clause 11 of Boris Johnson's Nationality and Borders Bill suffered a defeat in the House of Lords. The Bill divided asylum seekers into two groups: those who arrived through government-sanctioned means and those who did not, perhaps risking their lives crossing the Channel in a dinghy, or smuggled in the back of a lorry. Those who come in through "irregular" routes currently have restricted rights, including no access to public funds, a possible jail sentence of up to four years, and could have members of their family forbidden from joining them. The bill, which was defeated by a vote of 204 to 126, now faces scrutiny in the House of Commons.

If MPs do the right thing, and also vote to lift the ban on working, asylum-seekers here could have a much brighter future.

Madeleine Tiratsoo works as an access engagement officer at Islington Council, and also volunteers with me handing out period products and toiletries. Standing behind several tables filled with donations - everything from deodorant and hand sanitiser to baby wipes and perfume - she says it's high time the ban was lifted. "Giving asylum seekers the chance to work and earn a salary for themselves would make an enormous, enormous difference to the way they live," she says. "Here they have a chance to exercise some type of choice but it's very minimal as these are just hand-outs. Giving them the ability to fully access choice in the way we all want to in society would make a huge difference to their quality of life."

Several of the asylum seekers who come to the drop-in are "living very near the bread line," she adds. "Some are living without heating or electricity at the moment, as they cannot afford to pay heating bills. Anything that could improve that standard of living would be a good thing. All the asylum seekers I met here are eager to participate in society, to make connections with people in Britain. At the moment they are really blocked off from doing so."

The Refugee Education for Equal Employment Opportunities, a registered charity seeking to help refugees access higher education and jobs that meet their own specific qualifications, echoes that sentiment. "Allowing people seeking asylum to work in the UK not only means welcoming skilled people into our workforces, it will allow them to re-start their lives and move on from the traumatic experience they've been through," it recently tweeted. "Let's keep the momentum going to #LiftThe Ban!" 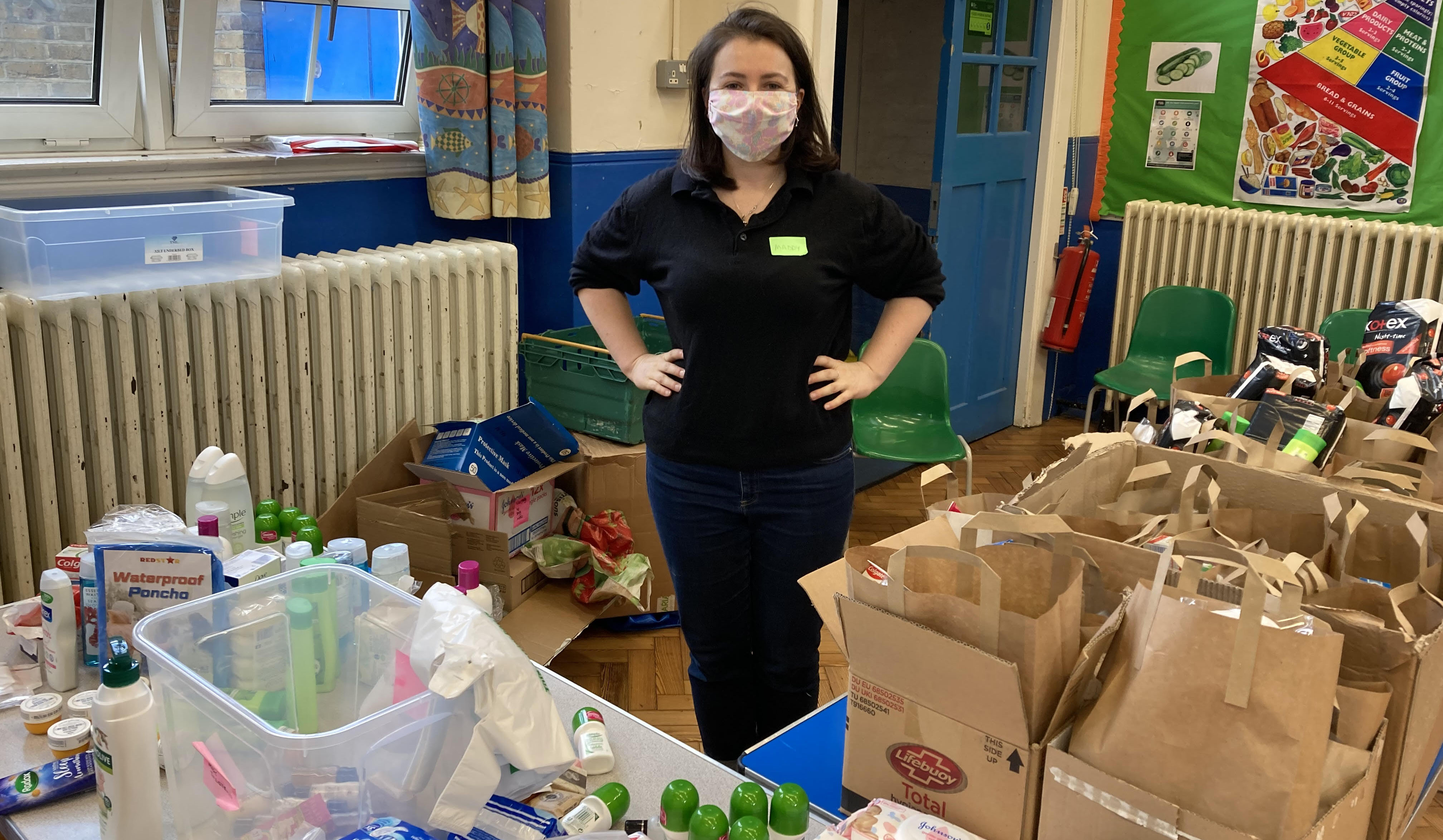