"They lived a movie lifestyle" News

London Met expert appears on Sky News to discuss the life of the Kray twins.

An expert from London Met’s Cass Faculty of Art, Architecture and Design has appeared on Sky News to talk about London’s notorious Kray twins - the subject of a new photography exhibition which draws heavily on The Cass’s East End Archives.

Dr Nicholas Haeffner, a Senior Lecturer in The Cass’s School of Art, took part in the interview to discuss why the Krays’ story has become so endearing to the public, despite their criminal activity.

Speaking on Sky News about why the twins remain so attractive to modern audiences, Dr Haeffner said: “They lived as movie stars. They styled themselves as very, very glamorous. Although they did all these illegal things, and were criminals, they lived in the open in a movie star kind of lifestyle.

“They were movie stars. Their image was performance, and the murders were theatre. They were theatrical.”

But, with a new film about the Krays, Legend, set for release, Dr Haeffner also highlighted the risk of glamourising the twins, who committed murders and other violent crimes across London in the 1960s. “These were really horrible things,” he said.

The Cass’s collections form part of the Legend of the East End exhibition, now running in Bethnal Green, which features work from Cass lecturers and alumni. 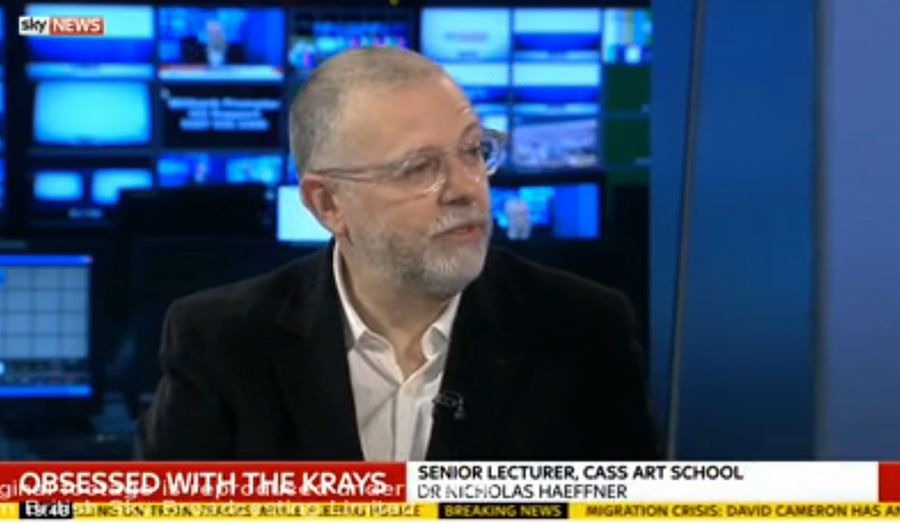