The Ronson Masterclass: Investigating the culture wars News from the School of Computing and Digital Media

Outside the US Embassy in London it’s cold, wet, and imposing – and full of students from three universities who have been invited to this exclusive event. The guards have guns, the building has a moat and everyone must pass through airport-style security checks before being granted entry.

Inside, the cold continues. Everything is big, grand, and obsessively clean. It wouldn’t strike you as the sort of venue Jon Ronson might choose to host an event.

Ronson, 55, is a British-American journalist, author and documentary filmmaker currently living in New York. He is best known for his books The Psychopath Test, Them: Adventures with Extremists and The Men Who Stare at Goats, which was turned into a feature-length film in 2009. More recent works include So, You’ve Been Publicly Shamed, exploring the dark side of the Twitter mob, and Things Fell Apart, a podcast for Channel Four in which he explores the origins of the culture wars currently plaguing modern society.

Ronson began the talk by addressing the political climate in America. “We may have hit rock bottom,” he stated in his opening remarks, highlighting that he was optimistic that the worst of alt-right online extremism may have passed. He added that “30% of Americans might be beyond hope”, implying that they would never be able to return from their extreme political leanings.

He felt, however, that many Americans who had voted Donald Trump in had “[touched] a stove and [seen] how hot it was”. Seeing Trump return to power was a “horrifying thought” but Ronson said he was optimistic that the worst was now over and that political division in America may, hopefully, begin to ease.

Abuse of power is nothing new, however, not only historically but for Ronson himself, who said that throughout his career the concept had figured prominently. Initially this had been a faraway concept with political psychopaths and extremists leading the way, but more recently he had noticed a paradigm shift.

“It’s about us,” he told students. Power had shifted from the leaders to the people, and suddenly we were the ones in control. It was time to look at “our participation in the culture wars”.

His interest in what he described as “hierarchal interviews”, where there are supposedly clear heroes and villains, was gone. Instead, he had become immersed in human conversations, where people sought to understand their differences and to move past them. He even suggested a name for his next series: Things Coming Together.

Ronson describes himself as a “humanistic journalist”. He has been criticised for his approach, particularly following his sympathetic coverage of advertising exec Justine Sacco, who was eaten alive on Twitter following a racist Tweet she wrote in 2014, right before boarding a plane from New York to Cape Town. Ronson connected with Sacco and told her story in So, You Think You’ve Been Publicly Shamed, where he said he didn’t think Sacco was deserving of the absolute character assassination that took place.

In 2012, he moved to New York, where he said he was miserable and “failing”. He saw others being taken down on Twitter and began to develop a “radical empathy”. Having been a victim of bullying himself he began “identifying with those being piled in on”. He spoke about how he had been “a fashionable bullying victim” in the sense that everyone had wanted a piece of him, very much in the same vein as Justine Sacco. Her experience was the “Truman show meets torture”.

A critic of his book about Sacco commented that a lot of Ronson’s writing about her was “situational, not systemic,” which the author said that he could understand. But nevertheless, he felt it was important to highlight Justine’s humanity and acknowledge that the actions of us, the Twitteratti, had real-life consequences for a real-life person. 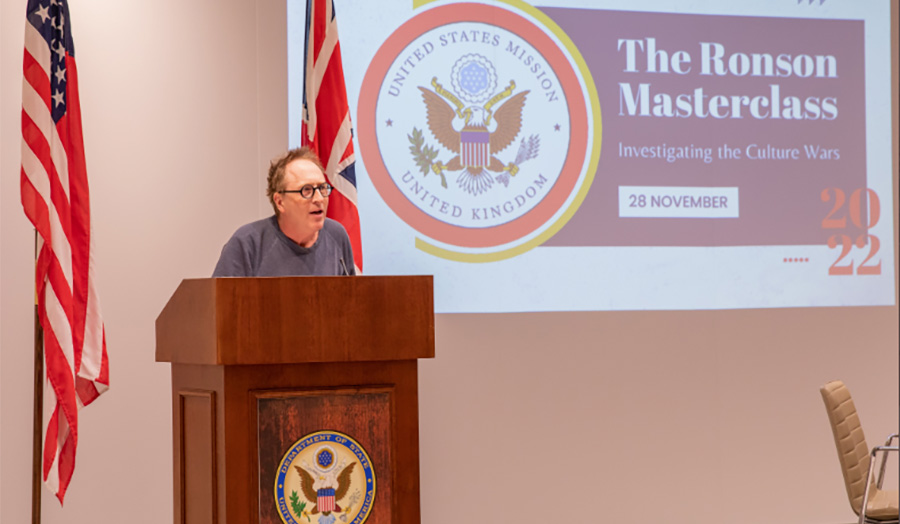