Staff from all areas of the University joined in the festivities in the Victorian hall, Holloway campus, to recognise the achievements of fellow colleagues after another year of success for London Met.

The University scored its highest ever Student Satisfaction Score in the National Student Survey in 2015, as well as its record high graduate employment score. It has also won accolade after accolade for its environmental sustainability work, being ranked the number one university in the country for reducing carbon emissions.

The awards were held to thank the staff who have helped in these achievements, as well as other successes in the University.

Robert Fisher, Director of HR, hosted the event. He said: “These awards are all about recognising the tremendous efforts our staff make each year. All the winners are nominated by their colleagues, highlighting the appreciation of their peers for the fantastic work they do.”

There was a poignant moment during the ceremony when a posthumous award was given to Dr Tözün Issa, who passed away earlier this year. Tözün was a long-serving academic in the Faculty of Social Sciences and Humanities, and played an important role in developing and improving the University’s Education courses.

Professor Peter McCaffery, Deputy Vice Chancellor of London Met, said: “Tözün worked closely with colleagues to embed multilingualism in the curriculum of BA Education Studies, MA Education and a range of pre-service and in-service teacher education courses at the University. The University’s research and teaching reputation in this area was further enhanced by the establishment of The Centre for Multilingualism in Education in 2008, which Tözün directed from its inception.

“Tözün was highly regarded by all those who worked with him in the academic world, not only for his scholarly achievements, but also for his humane warmth and professionalism, and he is deeply missed.”

Other winners of staff awards were:

Washington Mhangami, a lecturer in the Guildhall Faculty of Business and Law, won an award for his contribution to redesigning and developing new courses, such as the BSc Airline, Airport and Aviation Management course and improving existing courses through the use of business trips and simulations.

Ashraf Girgis, web manager in Information Systems and Support (ISS), led the development of both the Staff and Student Zones which have helped improve how we communicate with our students and staff. He won an award in recognition of this great work.

Deborah Byatt, Executive Assistant in the University’s Secretary Office, won her award in recognition of her excellent support on very complex and demanding casework that the Office handles - and because of her flawless spreadsheets!

Demetria Maratheftis, Head of Marketing, won the staff award because of her genuine care and commitment to the University, and for leading a team that strives to make a success of everything they do.

Eric Coleman, Senior Chemistry Technician in the Faculty of Life Sciences and Computing, won the staff award because of his track record of implementing innovative ideas and improvements, most significantly his input into the Dispensary Service, which provides students with lab materials on request.

Jerry Woods, Head of Campus Services in Estates, won the staff award because he has consistently gone above and beyond expectations and has a generally positive, supportive attitude.

Karl Acquah, IT and Media Service Specialist at ISS, won the staff award because, for him, problems are challenges to be met and overcome. He has a sunny disposition, he is a positive influence and his energy is infectious.

Paul Richmond, Policy and Data Analyst, won his award because he has been invaluable in analysing University data and communicating best practice to colleagues across our professional service departments and faculties. As a result of his work, we now have better information to work from and a deeper understanding of the significance of our data.

Steve Collins, Campus Support Supervisor in Estates, won a staff award because he is an ‘unsung hero’ of this University. He is the go-to colleague for practical or physical work. Many people will have been helped by Steve at some point - whether knowingly or otherwise during his 25-plus years of service. An unsung hero no more.

Vanessa Airth, Head of Employability in the Faculty of Business & Law, is always happy to get involved in additional projects that she believes will add value to our students. Her commitment, hard work and positive attitude are some of the reasons she won an award.

The Assessment Operations & Exams Office team won a staff award because they provide coherent and specific advice on all matters related to assessment. They offer a professional ‘front-of-house’ service for staff and students.

The Carbon Reduction Team, scooped an award because they have been widely recognised for their achievements in reducing the University’s carbon footprint.

The BA Journalism team won a staff award because they use their skills, knowledge and experience to make the course and students’ subsequent degrees more interesting and marketable. They include simulations of news days and news weeks, the production of streamed audio and video programmes, creating printed and online magazines, and encouraging students to produce final projects ranging from fashion magazines to podcasts.

The Payroll Team have won a staff award because they are always friendly and professional and their knowledge and guidance on a range of payroll issues including University systems, tax codes and pensions is regularly sought and trusted. Their customer service skills are exceptional, no matter what issue is.

The Theatre and Performance Practice Team, in the Faculty of Social Sciences and Humanities, won their staff award because this new course is being delivered to a very high standard, with a strong employability focus and an engagement with both industry and community. 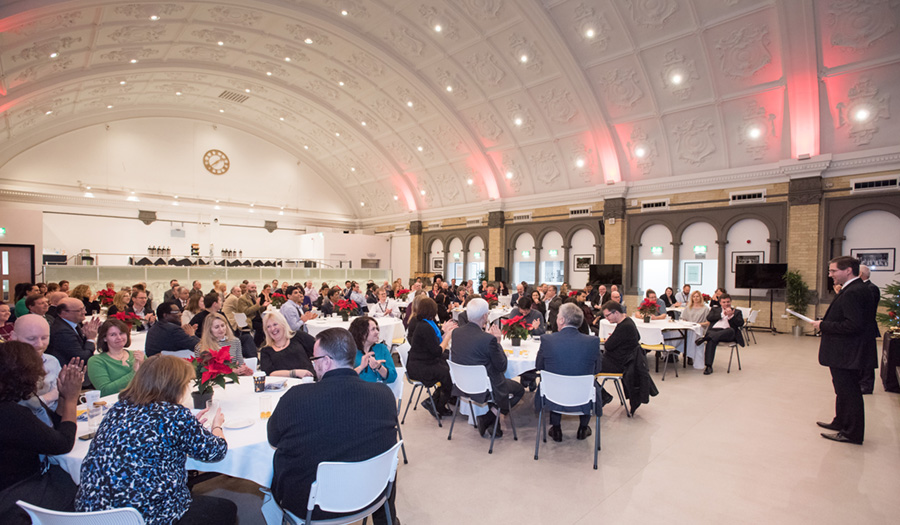