Garth Crooks - a two-time winner of the FA Cup, trustee of the 'Kick it out' campaign against racism in football, BBC Sports journalist and London Met Social Policy graduate - argued that there had been more than enough incidents of racism in football for the authorities to take action over the incident which took place during last week's Manchester City game in Russia.

Crook's was angered when Arsene Wenger suggested it was important that the facts were investigated before any action was taken and Jose Mourinho played down talk of black players boycotting the 2018 World Cup in Russia.

The comments emerged in a week in which current Sociology, Social Policy, Education Studies and Criminology students held an event to mark the launch of a new Runnymede Trust campaign to 'End Racism This Generation'. Over 250 students came together to show their support for anti-racism strategies that could be implemented now. Students made and signed individual pledges to tackle racism wherever they found it, at a personal, institutional and structural level.

Students recognised the complexity of struggling against racism and joined together to show that if enough people are committed to getting rid of racism then thousands of small acts can make a difference. The lunch time event included an inspiring personal account from historian Paul McGilchrist that illustrated some of the difficulties with trying to define ‘black’ identity in contemporary Britain. The message here was that critical debate and conversation should sit side by side with practical actions to combat racism. The life of the mind and the life of action both equally important.

The midday campaign was rounded off by Dr Brian McDonough, newly appointed course leader for sociology, who engaged students in a unique way; expressing how their commitment to end racism was inspired by their degree courses. Students were invited to fill a canvas with words that summed up what their course meant to them. If only Garth Crooks had been there: it would have been fascinating to hear what he would have said about the impact his London Met course had on his own career and campaigning! 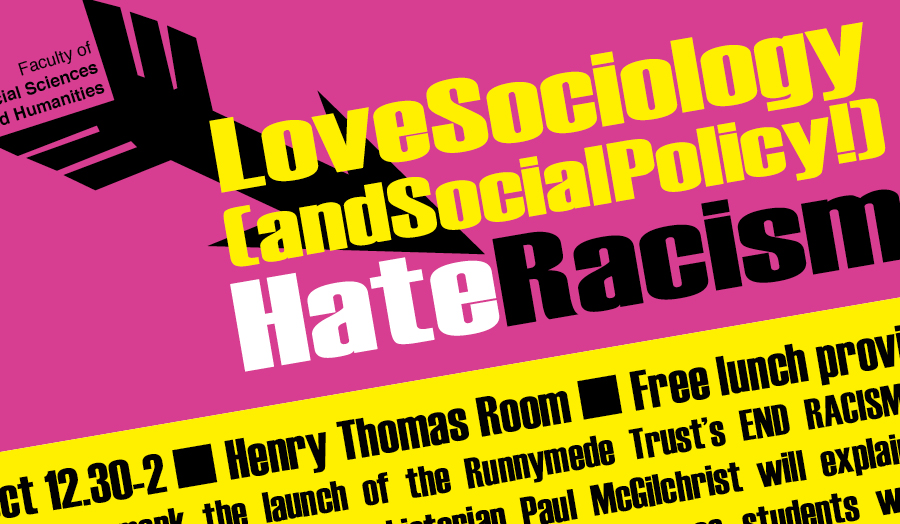