Romanian Ambassador to the UK, His Excellency Dr Ion Jinga, visits Faculty of Business and Law

The Romanian Ambassador to the UK has highlighted the benefits of studying in London during a visit to London Metropolitan University.

Speaking at the Faculty of Business and Law’s Moorgate Building in the heart of The City, Dr Ion Jinga said: “British universities are among the very best in the world, so it’s understandable that they attract many Romanians to come and study with them.”

However, he also urged students to consider the many opportunities for graduates in Romania - a country with the fastest growing economy in Europe.

“I’d like to see universities do more to encourage students to think about how they can play a role in modern Romania after they have graduated,” he said.  “The most valuable asset of a nation is its people, and its educated graduates are key to a country’s success.

“So I would urge those Romanians who have studied in the UK to think about returning home after their studies or perhaps a few years working here.”

During his talk, Dr Jinga emphasised the strong links between the UK and Romania, citing the €3.3billion value of trade between the two countries.

“We have recently created over 100,000 new jobs in Romania, and the economy grew last year by 3.5% - the biggest economic growth in Europe. Your University [London Met] has a focus on business and law here in The City of London, but there are 5,000 British companies working in Romania today who would value students with such an education.”

The Ambassador's visit, on 24 February, enabled him to meet Romanian students and to find out more about the University’s ties with his country.

Professor Stephen Perkins, Dean of the Faculty of Business and Law, said: “We feel passionately about supporting our Romanian students at London Met, and we are privileged that His Excellency visited us today.

“This follows other high-profile guests to the Faculty of Business and Law, such as Lord Young of Graffham, the Prime Minister’s business guru, who visited us last year to find out more about our links with Small and Medium Sized Enterprises.

“Today’s visit confirms our position as a global university, right here in this world city of London.”

Find out more about the Faculty of Business and Law 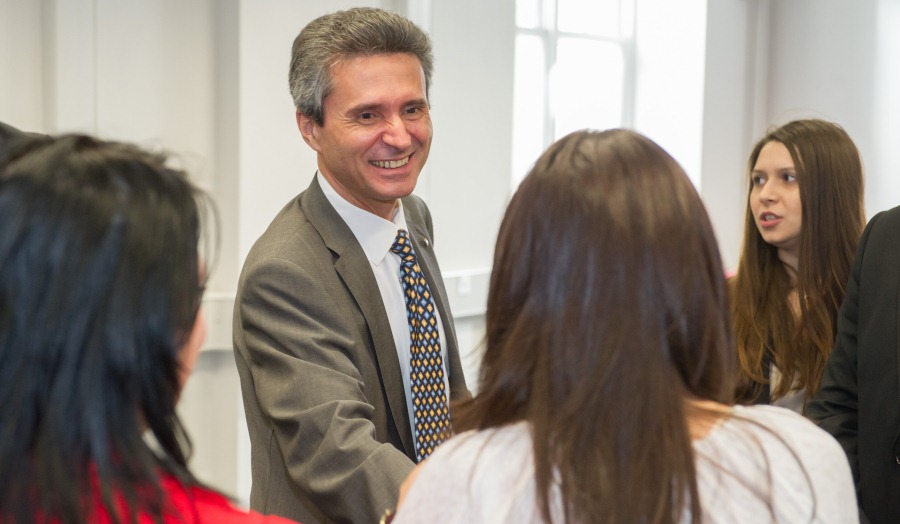