Two recent books from London Met Senior Professor of Architectural History, Nicholas Temple, have been lauded by the architectural history community for their valuable and original contributions to the field.

The first, The Routledge Handbook on the Reception of Classical Architecture, was co-edited by Temple with Andrzej Piotrowski and Juan Heredia, and contains essays from both Temple and London Met's Head of Architecture, Professor Christian Frost. It is the first comprehensive study of the reception of classical architecture in different regions of the world.

Exploring the impact of colonialism, trade, slavery, religious missions, political ideology and intellectual/artistic exchange, the authors demonstrate how classical principles and ideas were disseminated and received across the globe. By addressing a number of contentious or unresolved issues highlighted in some historical surveys of architecture, the chapters presented in this volume question long-held assumptions about the notion of a universally accepted 'classical tradition' and its broadly Euro-centric perspective.

Alberto Perez-Gomez, Bronfman Professor of the History and Theory of Architecture at McGill University, described the book as having "beyond impeccable and original historiography… its great merit is a critical openness to the complexity of cultural, social and political issues raised by the topic. Given the European origins of global technological civilization, the particular adoption of the classical tradition in diverse postclassical and modern historical contexts is a timely topic to orient our conversations about appropriate architectural practices.

"While accomplishing its ambitions to examine the reception of classical architecture around the world, this remarkably edited collection is no mere compilation of scholarship under set ideological assumptions."

The second title, Architecture and the Language Debate: Artistic and Linguistic Exchanges in Early Modern Italy, is a monograph by Temple examining the creative exchanges between architects, artists and intellectuals, from the Early Renaissance to the beginning of the Enlightenment, in the forging of relationships between architecture and emerging concepts of language in early modern Italy.

The study extends across the spectrum of linguistic disputes during this time – among members of the clergy, humanists, philosophers and polymaths – on issues of grammar, rhetoric, philology, etymology and epigraphy, and how these disputes paralleled and informed important developments in architectural thinking and practice. Drawing upon a wealth of primary source material, such as humanist tracts, philosophical works, architectural/antiquarian treatises, epigraphic/philological studies, religious sermons and grammaticae, the book traces key periods when the emerging field of linguistics in early modern Italy impacted on the theory, design and symbolism of buildings.

David Leatherbarrow, Professor of Architecture, University of Pennsylvania commented that, "Temple's erudite and persuasive account of early modern (fifteenth ― eighteenth century) Italian architecture culture reveals how buildings can give rise to thought, how they can show and say through means proper to the craft the reality and beauty of places in which we would like to live ― then and now."

While Joseph Rykwert, Paul Philippe Cret Professor Emeritus of Architecture at the University of Pennsylvania, and recipient of the 2014 RIBA Gold Medal said, "Nicholas Temple's new book is a most valuable, original and engaging fleshing out of the dry story of language, in which art and architecture is discussed and theorized from the earliest Renaissance to the passage from Rococo to Neo-Classicism."

Both titles are published by Routledge. 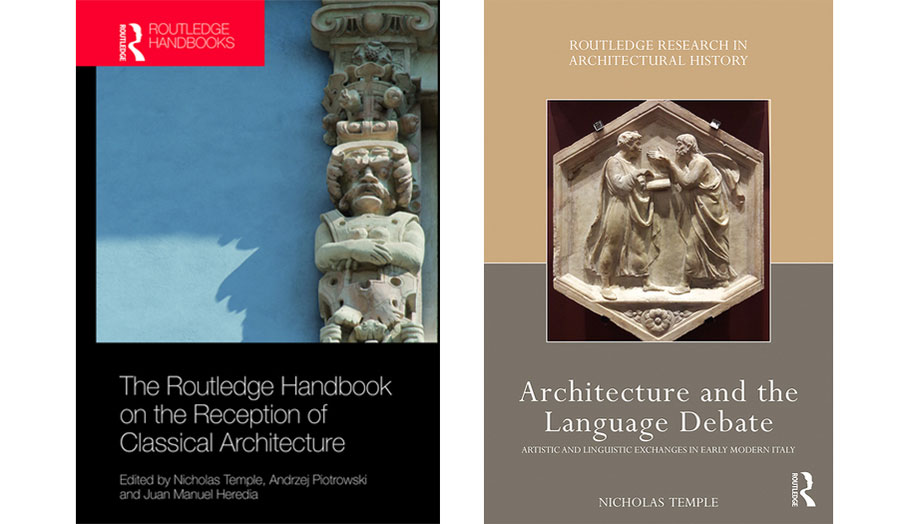