Wendy Sloane, Associate Professor of Journalism, on the dwindling power of the Russian language amongst London's Ukranian diaspora

Russia’s push to make Ukrainians speak Russian is having the opposite effect on those who have fled the country but plan to go back once the war is over. The diaspora is determined to return to their homeland speaking only Ukrainian.

“When the war started we thought that we cannot speak the language that is killing Ukrainians. So we switched to Ukrainian in our personal communication, messaging and speaking by phone,” said Olena Geda, 38, a former journalist from Kyiv who is now sheltering in north London with her six-year-old daughter, Maya.

“A lot of Ukrainians no longer feel that Russian is their mother tongue, now that all the orders to kill Ukrainians have been given in Russian. For my generation and for my daughter’s generation, Russian will always be the language of occupiers.”

Russian President Vladimir Putin has long claimed that Ukraine has forced Russians in the Russian-speaking parts of the country to speak Ukrainian. He has cited this as cited as proof of ethnic “genocide” against them, which he has used as one of the pretexts for the Russian invasion.

“The charge is both absurd and obscene, as it suggests that Ukraine’s language policies are tantamount to the Holocaust,” Ukrainian specialist Alexander J. Motyl, who is a professor of political science at Rutgers University, wrote in Foreign Policy. “In Putin’s unhinged mind, the very assertion of a non-Russian identity is a mortal threat to Russia, the Russian state, and of course to him.”

He pointed out that non-Russian languages were not banned during Soviet times. “Instead, they squeezed them out of most professions and cities, discouraged their use in public and schools, and implied that Russian was the only language that mattered—especially if one wanted to promote one’s education and career.”

More recently, Putin himself has banned the use of Ukrainian in some parts of Ukraine in his quest to “help” the Russian-language majority there. Children in the besieged town of Mariupol, for example, have been told their summer holidays will be cancelled and that instead they will be forced to learn Russian in preparation to enter Russian-language schools in autumn, according to various news reports from the area.

Russian and Ukrainian have the same Cyrillic alphabet and share about 61 percent lexical similarity. Perhaps more importantly, about 15 percent of Ukrainians consider Russian their native language, while about 22 percent consider both languages to be their mother tongues, various sources say.

But just as Putin did not anticipate the Ukrainians to fight so tirelessly against Russian soldiers, he did not count on Ukrainians in the eastern and southern part of the country, where Russian is predominantly spoken, choosing to reject their first language and make the switch to Ukrainian.

In the disputed Donetsk region, almost 60 percent of the population are ethnic Ukrainians, although some speak Surzhyk, a mix of Russian and Ukrainian which is often referred to as a “Creole” of the two languages.

Geda, who is in the UK under the Homes for Ukraine refugee scheme, is typical of many Ukrainians from Kyiv. She happily spoke both Russian and Ukrainian interchangeably before the Russians invaded but now, thanks to what she calls the “genocide” of her people by Russians, is switching over to Ukrainian.

Her daughter Maya spoke Ukrainian in school and Russian at home and in the playground, but now, she said, she prefers that Maya speaks only Ukrainian.

“It was difficult at first because it’s hard to express emotions when it’s not your native language. But three months have passed, and we’re only speaking Ukrainian,” she said.

Russian as a “power language”

Around 260 million people speak Russian worldwide, but only about 157 million claim it as their first language. The language of Tolstoy and Dostoevsky is “unique” in that it is taught in all the “prestigious” universities in the UK, USA and Asia, according to TheConversation.com - unlike Ukrainian.

“With all those speakers, all that clout, and all that cultural production, Russian’s status as a power language looks as natural as beets in borscht. But it is not,” it says. Instead, Russian derives its power not from its superior linguistic system but from the “historical arrangements of power that give their speakers – and culture – perceived status and value”.

Now, that power is dwindling.

Yuliya Solovei, 34, came to London in April with her six-year-old son Artem and considers Russian her first language, although she is (almost) equally comfortable in Ukrainian. Artem went to a Ukrainian-language nursery in their home of Bila Tserkva, about 80 kilometers south of Kyiv, but he spoke only Russian at home.

Now, however, Solovei wants Artem, who is just learning to read and write, to learn the basics of Ukrainian before anything else. The former online fashion business owner, who is also in the UK on the Homes for Ukraine scheme, has spent time scouring the internet for children’s books in Ukrainian so he can learn how to speak the language properly.

“I speak to my best friend in Russian and she answers in Ukrainian, but she switches to Russian when speaking to my husband as his Ukrainian isn’t as good as mine,” she says, adding that now she'll make the effort to speak Ukrainian more.

But language does not always equal loyalty. In June, Ukrainian soldier Aleksandr Bespalyi, who was interviewed in Russian in the Odesa region, told Newsweek:  "Eighty percent of the guys in our unit speak Russian amongst themselves. But 100% of us are united against Russia and against Putin. Language has nothing to do with it."

Self-proclaimed “disinformation analyst” Dietmar Pichlar agrees. “Language is not a political statement in Ukraine, people can speak also Russian and still have a strong Ukrainian identity. Ukrainians in Eastern or Southern cities like Kharkiv or Odesa feel more connected and loyal to their country than ever,” he tweeted earlier this week.

A poll conducted in late 2019 discovered that 69 percent of Ukrainians favoured “preserving Ukrainian as the country’s only official state language while maintaining the freedom to use Russian in private life”, the Atlantic Council reported.

“President Putin is accomplishing the exact opposite of what he intended to when he started this invasion, and if he is counting on the Russian speakers, he should be aware that the Russian minority is not entirely on his side,” wrote Anna Batta, Associate Professor of International Security Studies at Air War College. 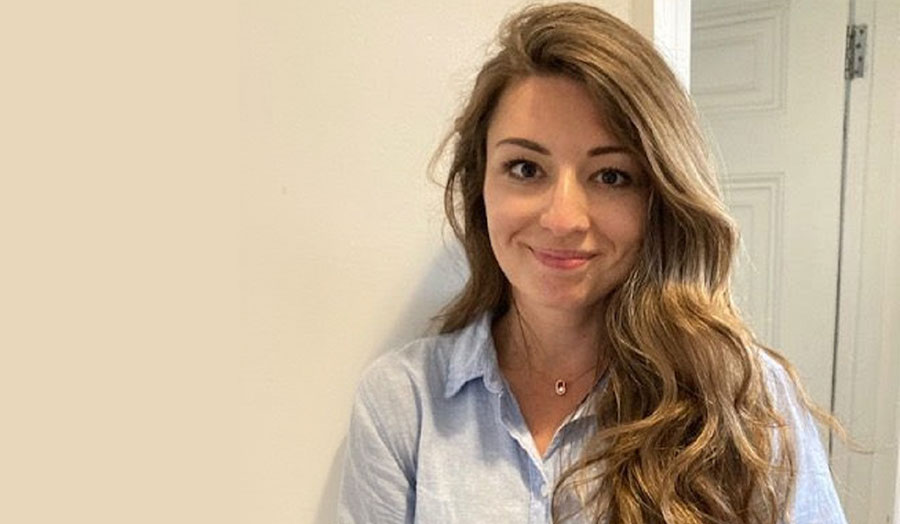 Image: Yuliya Solovei at her host's home in London. By Wendy Sloane.