Janette Parris, an acclaimed artist who teaches on the BA Fine Art course at The Cass creates new work for Peckham Platform.

Janette Parris, an acclaimed artist who teaches on the BA Fine Art course at The Cass will create new work based on the people of Peckham for the Peckham Platform’s first exhibition in 2016.

Peckham Promenade will take inspiration from the characters, lives and daily interactions of the people living, working in and visiting Peckham’s bustling Rye Lane. Parris will depict the stories she encountered whilst conversing with local residents and traders on the busy street. A long and colourful streetscape will be applied directly to the gallery walls depicting the rich culture of everyday life in Peckham’s vibrant town centre, whilst a video piece will animate some of the conversations Parris has had during a series of digital portraiture and animation workshops with Year 10 students at Harris Academy Peckham.

This unique location-specific artwork developed throughout 2015, when Parris took to the streets of Peckham to meet local businesses, traders and shoppers with whom she struck up a relationship. It was from here that her digital portraits came to life, depicting the characters that she met on her travels and committing their individual take on Peckham to ‘virtual canvas’ as it were, only to be redrawn back onto the gallery walls. Next summer the work will be painted onto its final destination: the walls of the Rye Lane – Choumert Grove pedestrian corridor. In total a full 60 metres of street scenes have been created, a small selection of which will be shown in this exhibition.

This observational exploration of Peckham’s identity was the starting point for a series of digital portraiture and animation workshops that were led by Parris with Year 10 students at Harris Academy Peckham, the results of which will be featured within the main exhibition.

Janette Parris is a contemporary artist who uses the everyday as the basis for much of her work. She works across different media including: drawing, animation, and performance (musical and theatre). She creates strongly narrative work, often in the form of comic strips to capture the humorous essence of life, while reflecting a dry and self-effacing look at the world. 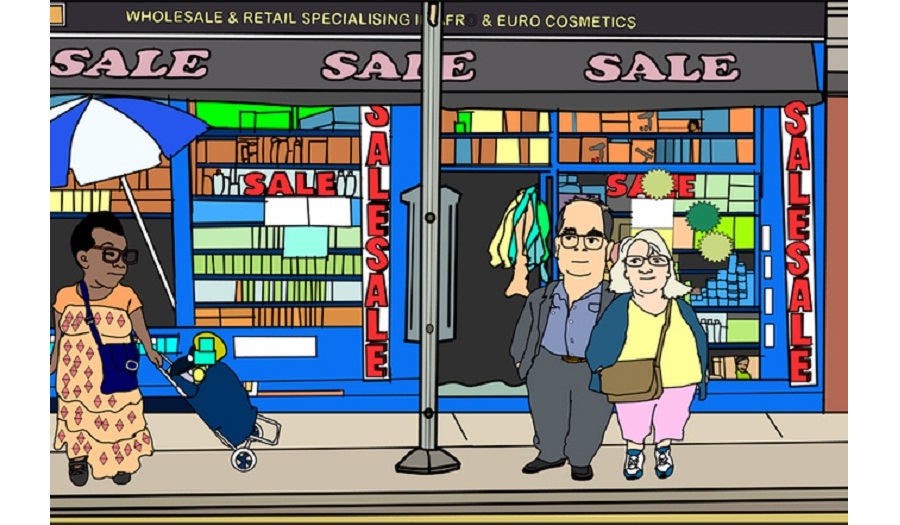