Out on an Island News from the School of Art, Architecture and Design

A free event explored the themes behind a new book about the Isle of Wight's Hidden LGBTQ+ History.

London Met's CREATURE (Centre for Creative Arts, Cultures and Engagement) hosted a joint event with theatre company StoneCrabs to launch their new book, Out On An Island - The Isle Of Wight's Hidden LGBTQ+ History: People, Places And Real-Life Stories.

The event, which took place on 2 March, featured an introduction by comedienne, a singer, and a writer and playwright Clare Summerskill, followed by a short address by the publishers as well as Franko Figueiredo and Caroline Diamond, editors of Out On An Island.

Special guest Laila El-Metoui, who's been honoured as Stonewall Lesbian Role Model of the Year (2020) and named on the Guardian Pride Power List 2021 also featured. Attendees were also treated to a brief preview of a new play in development from StoneCrabs Theatre exploring the life and adventures of the fabulous gender-bending Joe Carstairs, an enigmatic lesbian who raced boats in the Solent and had a boatyard in East Cowes.

StoneCrabs' Artistic Director Franko Figueiredo and Executive Director Fabio Santos said, "For the past two years we have been collaborating with residents in the Isle of Wight in a creative investigation documenting 100 years of LGBTQ+ History. Out On An Island is an oral history project, a research project, an arts project and foremost, it is a celebration of a close-knit community surviving together in the face of exclusion, prejudice and misrepresentation.

"The culmination is a beautiful book that holds accounts of disturbing homophobia, rejection and exclusion peppered with moments of joy and celebration. We are very grateful to London Met and CREATURE Research Centre for hosting the London launch of the book. The centre's rigour and commitment towards interdisciplinary research in the creative arts, its practice, cultural impact and societal engagement, aligns well with our own commitment to shine a light on untold stories, place underrepresented voices centre-stage and encourage depth of engagement.

"StoneCrabs Theatre is committed to documenting our work so others can access, understand and benefit from it. Being hosted by CREATURE Research Centre is an incredible privilege and it helps us disseminate our work more widely. We look forward to future collaborations."

Dr Jacek Ludwig Scarso, Deputy Director of CREATURE said, "On behalf of CREATURE, I'm genuinely thrilled to welcome an inspiring company such as StoneCrabs Theatre to present their new publication and celebrate their 20th anniversary. Over the years, StoneCrabs has been a champion of inclusion, equity and artistic innovation, and these are clear synergies with CREATURE's ethos.  I am truly delighted at the success of this event and at the possibility of hosting it on Campus in front of a live audience. We very much look forward to many more opportunities to work together."

Out On An Island was described by human rights activist Peter Tatchell as "a brilliant oral history of LGBT+ communities and culture on the Isle of Wight: the persecutions, campaigns, defiance, solidarity and triumphs."

Actor, writer and politician Lord Michael Cashman MBE similarly praised the title, calling it "a wonderful rich history of an island I knew as I child but never knew as an adult gay man. This wonderful and intriguing history is brought together by the personal testimonies and experiences of LGBT+ people who lived on the Isle of Wight and delves courageously into the past one hundred years. In so doing it builds bridges and looks forward with optimism and joy." 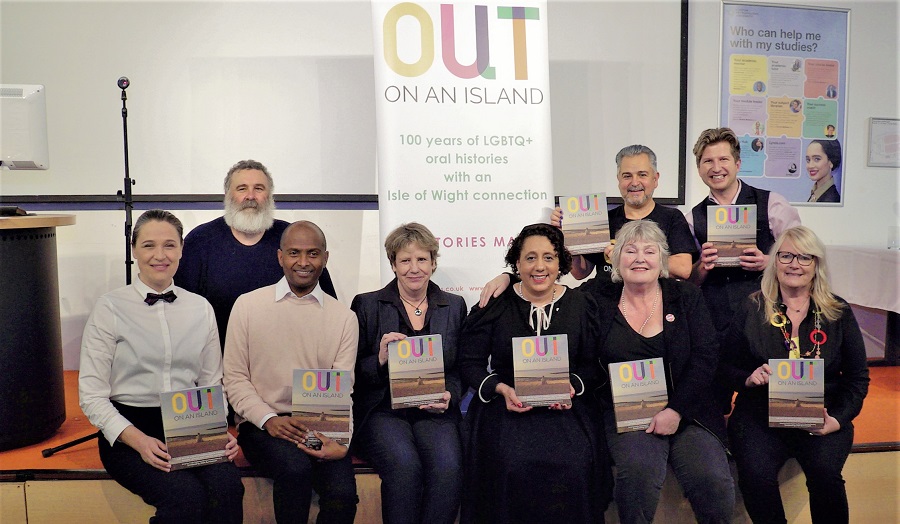