Dr Stephen Hills researched the role of boxing in tackling social problems in the UK.

A new study co-authored by Dr Stephen Hills, senior lecturer in Sports Business Management, looks at how and why boxing can play a role in social change.

The report, titled “The role of Boxing in Development: A social marketing perspective”, identified five common themes which help to explain why boxing is more successful than many other sports in re-engaging disaffected young people, addressing behavioural problems and putting people on a pathway to improved life chances.

Dr Hills collaborated with Dr Matthew Walker, of Texas A&M University in the United States, to undertake this study for England Boxing, the national governing body for boxing.

The study used case studies from the Boxing Academy in Hackney, which offers boxing as an alternative to school exclusion, and Anfield Amateur Boxing Club’s ‘Champions of Life’ programme, which uses boxing to tackle gang involvement in Liverpool.

A social marketing theoretical framework was applied, to isolate how boxing adds value to the desired behaviour change for each intervention.

Dr Hills said: “At a time when NGBs are being challenged about their role in development as part of the Government’s new sports strategy, this study has isolated the unique role that boxing can play, which will hopefully lead to targeted funding and programme design that effectively leverages the capability of boxing to tackle gritty social problems and access hard to reach target groups.”

Dr Hills presented the findings at an England Boxing event at the Boxing Academy in Hackney to attendees from the House of Commons, House of Lords, Sport England and national press on Tuesday 10 January.

This study is now progressing through the peer-review process for international publication in an academic journal.

The five themes identified in the report are;

The research showed that because boxing is extremely physically demanding and requires fighting skills it possesses a degree of credibility amongst disaffected young people in tough circumstances. This ‘grittiness’ enables it to be regarded as a credible alternative to anti-social activities (such as being in a gang or involved in crime) and means that young people can choose to participate in boxing, without losing face. Whilst some sports (such as football) may have greater global appeal, the status of boxing as a tough and gritty, makes it a more appealing platform for positive personal and social change amongst the most dis-engaged groups from the toughest areas, where boxing clubs are also located.

“We have former gang members in the gym and when their mates from the gang say ‘are you coming out tonight’ they say ‘no, I am going boxing’ and they do not lose any face or credibility.”

Enabling the acquisition of values and skills

To be successful at boxing requires discipline, mental strength, control, focus and an ability to take personal responsibility. These are often lacking in people involved in anti-social activities, yet taking part in boxing enables them to acquire and learn these values and skills. The fact boxing is an individual sport forces participants to take responsibility as there is no-one else to blame.

“What you have to go through as a boxer with all the hard work and discipline creates respect for yourself. Once you have this you can then have respect for others.”

A means to manage aggression

Rather than seen be viewed as a release for aggression, boxing is actually a replacement for aggression. It does not rid the participant of aggressive tendencies it enables them to re-channel it. Boxing requires participant to think clearly in the face of conflict (with an equally matched opponents) and so teaches participants to learn to stay cool and manage aggression.

“When you are using a lot of energy and anger you have to calm down and use your energy, anger and aggression in a constructive way so that you don’t spin out of control and stay disciplined. You can then apply that outside of the ring.”

The research revealed that many of the participants had difficult family lives and a lack of belonging. The boxing gym created a sense of family or community which they had previously never experienced or was able to replace the one that they had felt from being part of a gang.

Whilst many sports and environments can also create a sense of family or community, the research indicated that being part of a boxing gym creates particularly strong bonds between individuals because of the demands of the sport and the effort that participants put into it.

Like in many sports, coaches in boxing provide positive role models. Crucially, the fact that many coaches have also had difficulties in their lives’ yet have come through them, as a result of boxing, means they have a particular appeal to people from the most challenging backgrounds. The coaches are able to show understanding and empathy which builds strong bonds of trust with people from disadvantaged circumstances.

“Any problems I have I can to the coaches about. They have been through what we’re going through. They’ve been in my shoes so they can give me guidance.” 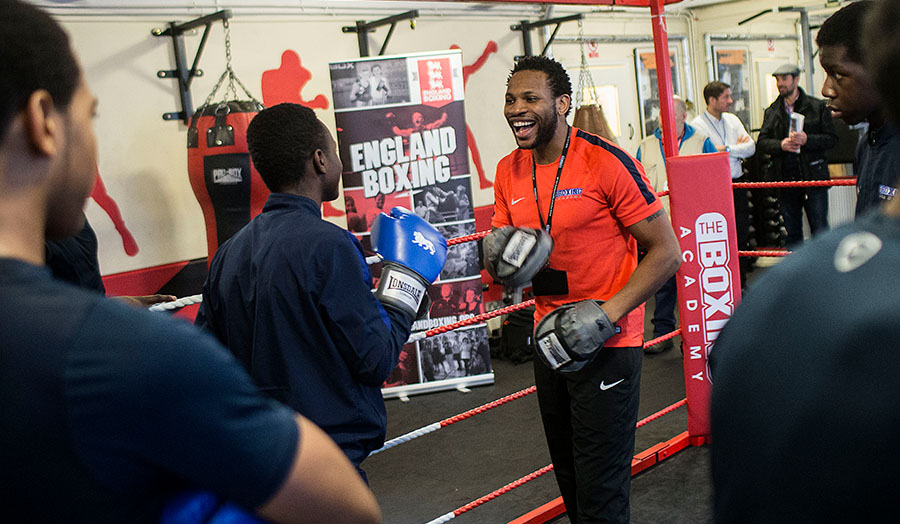