Paul Cummins MBE is one of six honorary graduates at this year's Summer Graduation Ceremonies.

The creator of one of the country’s most celebrated public art exhibitions is to be honoured by London Metropolitan University.

Paul Cummins MBE, the artist behind the installation of 888,246 ceramic poppies at the Tower of London in 2014, is to be awarded an honorary Doctorate in Philosophy by the University.

“I was surprised to get the nomination” Paul said, “especially as I’m studying for a PhD, but I’m really happy, I’m grateful for the honour.”

More than 4 million people visited Paul’s Blood Swept Lands and Seas of Red installation, which marked the centenary of the outbreak of World War One.

Paul, from Chesterfield in Derbyshire, returned to education in 2007 as a mature student, having spent his working life as an architectural model maker. Since graduating in 2010 from the University of Derby, Paul’s work has featured in the 2012 Paralympic Games Cultural Olympiad as well as at Chatsworth House, Blenheim Palace and Hardwick Hall.

“I’m happy with what I’ve done so far and I’m happy with where it’s led me,” Paul commented, “but you never know what’s going to happen in the future, so I try not to think about it too much.”

Paul’s installation, ‘Candy’, was exhibited at the Chelsea Flower Show this summer.

As well as using education to retrain and expose his artistic talent, Paul overcame adversity, working through his colour associative dyslexia to become one of the foremost figures in ceramic art today.

His journey is an embodiment of what London Metropolitan University stands for; that lives can be transformed through excellent education.

In just five years Paul has become an internationally renowned artist whose work united millions of people. He was recognised in the 2015 New Year’s Honours List with an MBE.

He received his honorary Doctorate at London’s Barbican Centre on Monday 27 July alongside thousands of London Met graduates.

Paul addressed the 2015 graduates, saying, “good luck, don’t give up, and ignore everybody.

“If you have something you want to do, just ignore everybody until you do it, don’t let anybody stop you doing what you want to do.”

Paul is one of six honoraries to be celebrated at London Met’s summer 2015 awards ceremonies.

He is joined by individuals from the worlds of science, business, the arts, law, and journalism who too represent incredible achievement and dedication in their fields.

Amol Rajan, Editor of The Independent and one of the youngest editors ever to take the helm of a UK national paper was awarded an honorary Doctorate of Letters.

"I feel very humbled to be here in front of hundreds of people that have achieved so much," said Amol in his acceptance speech. "There's an incredible sense of energy and excitement coming off all the students. It's wonderful and intoxicating. I feel humbled, excited and very lucky.”

Christine Coates, manager of the TUC Collections library until her retirement in 2014, received an honorary Doctorate in Philosophy to recognise her 18 years of service to the Trade Unions Collections and the University.

Christine’s message to students emphasised how achieving a degree was just the start: “As I have found learning continues throughout life… continue to research and question, never forget the importance of making those in power accountable for their actions. But also enjoy life.”

Rob Dickins CBE received an honorary Doctorate of Business Administration celebrating over forty years in the music industry working with artists such as Cher, Madonna, Enya and The Sex Pistols.

Sharing some words of wisdom with the students Rob said, "try to be the best and work the hardest. Ambition is a very good thing, as long as you temper it with being true to yourself, be honest, be honourable and most importantly be kind."

"I’m thrilled to be receiving this honorary doctorate from London Metropolitan University" Rob commented,"It is a great honour and a great privilege, London Met is very a special place"

Shaun Wallace, of ITV’s hit show The Chase, became an honorary Doctor of Laws recognising his formidable mind and the impressive legal career.

“It’s a tremendous honour to be recognised in this way” said Shaun. “When I was asked back to London Met as a guest lecturer in 2005 I felt like a returning conquering hero and now to be receiving an honorary degree, it’s beyond my wildest dreams.”

Professor John Marshall MBE, inventor of the Excimer laser, received an honorary Doctorate in Science in recognition of the revolutionary work he has done in developing laser eye surgery and research into ocular health.

“You really can do anything. If you apply yourselves and you keep up the enthusiasm that you have today the world is your oyster”

London Metropolitan University is proud to welcome such outstanding hearts and minds to its alumni family. 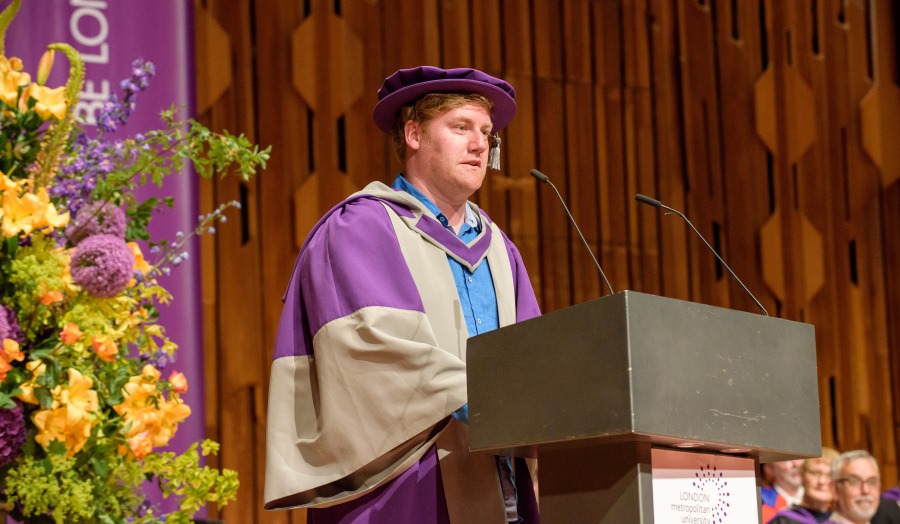