Course Leader for the BSc Music Technology and Production degree, Steve Good, welcomed Nathan Chan from St Antony’s Catholic Primary School, Newham, and drummer Steve Raman, to the Calcutta House recording studios in October. Senior Lecturer, Steve was lending a hand by recording and programming the drums for “Look to the Sky”, a song for the Living Wage Week, written by Nathan. The drums, performed by Steve Raman, support a rousing vocal performance from the children of the school.

In addition to the song, St Antony’s also teamed up Saloum N’Jie, a film director who has worked on TV shows including Bridgerton and Luther, to produce a hard-hitting new music video, which takes aim at the cost-of-living crisis and the scandal of low pay in Living Wage Week 2022

Commenting on the importance of the project, Steve Good said “The cost-of-living crisis is a serious issue facing us all, but no one more than children in deprived areas, where it truly is a case of heat or eat. When Nathan approached me with the idea of ‘Look to the Sky’, I was keen to jump on board and lend all the help I could. Not only was it a pleasure to welcome Nathan and Steve to the studios, but it was also a great experience for our students who got to witness the recording session.”

As part of Living Wage Week, pupils of St Antony’s Catholic Primary School, Newham, released a new music video addressing the cost-of-living crisis and calling on businesses to sign up to pay the real Living Wage based on the cost of living.

Pupils at the school are passionate about change and, as part of their work with Community Organising Charity Citizens UK, have successfully campaigned for several local employers to pay the real Living Wage - including London City Airport, Tate & Lyle and ExCel London - boosting the pay of thousands of local workers.

Living Wage Week, which was held between 14 and 18 November, is the annual celebration of the 11,000 businesses who voluntarily go above and beyond the government minimum otherwise known as the “National Living Wage”. The National Living Wage will increase from £9.50 per hour to £10.42 in April, as announced in this week’s Autumn Statement.

Taking payment plans and debt advice Losing pounds to the meter - this can’t suffice What happened?

To the level-up policy, They talk about growth, yet sink the economy

Low wages, sent us to bankruptcy

Heads above, in a sea of rising prices The food and fuel, to this cost of living crisis” 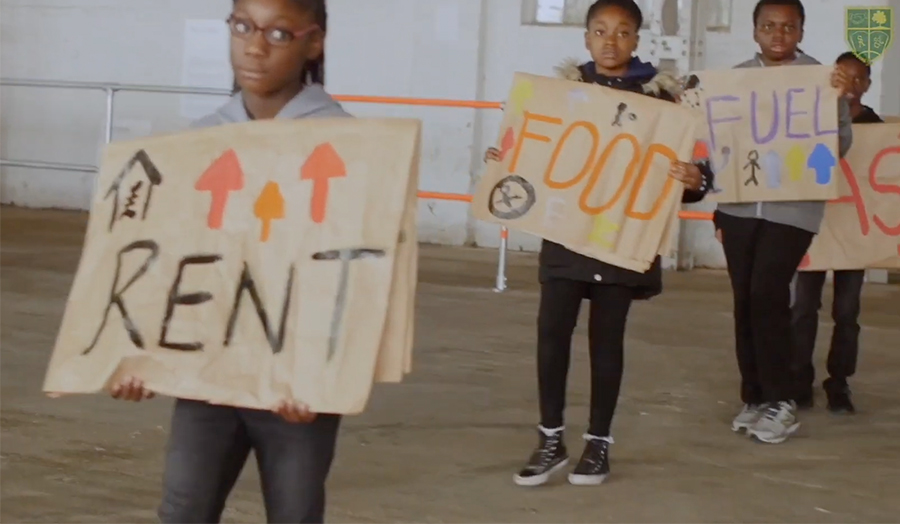