BA Film and Broadcast Production students at London Metropolitan University are playing a key role in boosting the profile of The Bank of England.

BA Film and Broadcast Production students at London Metropolitan University are playing a key role in boosting the profile of The Bank of England after being commissioned to make over 30 films for the organisation.

The students, who study in the Sir John Cass Faculty of Art, Architecture and Design, are part of We Make Films, a production company run by students and staff.

After submitting a pilot to The Bank, the students were asked to produce more videos for its website and other promotional channels.

Patrick Clopon, one of the students commissioned, said: “It was a great relief that they liked our prototypes so much. Our first day at The Bank was really daunting because they are so socially and economically respected, and needless to say we wanted to make a good impression. Thanks to our amazing team and lecturer Charlotte Worthington, who guided as through it all, we were able to really impress them with our efficiency and practicality.”

Fellow student Divine Angela Ekeleme added: “The Bank of England commissioning us to do more was a big deal to me because we are a newly formed company. To have them liking our work is confirmation that our lecturers have done a great job.”

Elsewhere, talented students from We Make Films recently interviewed Channel 4 News presenter Jon Snow. They were commissioned by the Royal Society of Arts in partnership with the website The Samosa, which hosts sophisticated political reporting and intelligent commentary on Pakistan.

The team travelled to ITN’s London studios to meet the famous journalist, but any nerves they had were quickly eased by Jon’s warm and down-to-earth manner.

“He was so natural and easy going,” said Suzanne Wakefield, one of the students who interviewed the veteren journalist. “I was nervous that I would mess up the questions by speaking too fast, but after meeting Mr Snow before the interview I was put at ease by his friendly personality and charm.

“The interview flowed without a hitch, with Mr Snow answering the questions with personal insight and thought. Afterwards he stayed for a few extra minutes for us to take some personal and professional snaps!”

The project is one of many commissions from real clients that stem from the DIY Studio run by lecturer Charlotte Worthington as part of the BA Film and Broadcast Production course - another example of London Met's commitment to giving students quality, real-life experiences.

Find out more about The Sir John Cass Faculty of Art, Architecture and Design. 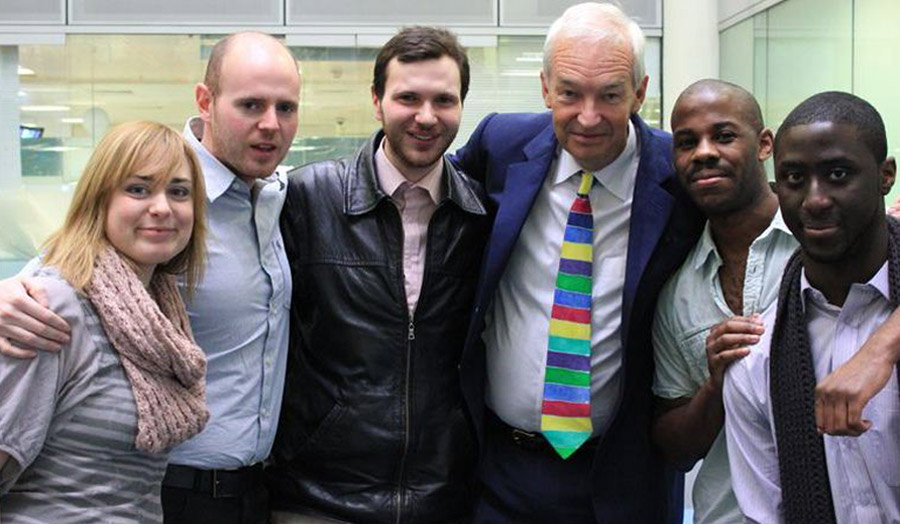