London Met hosted a special visit by Sarah Humphreys, chair of LGBT mental health charity East London Out Project (ELOP), who spoke about the difficulties LGBTQIA+ asylum seekers face in their home countries – and when they apply for refugee status in the UK.

ELOP has the largest LGBT counselling service in London, with up to 120 spaces available every week, all staffed by volunteers. They also provide social support activities and a peer network to create a safe space in the capital.

For the last eight years, the charity has also become a point of help for asylum seekers, many of whom don’t feel free from homophobic and transphobic persecution even after they have left their country of origin.

“For some people, being in London isn’t particularly safe. Some people [here] are fearful of their own communities,” Humphreys said.

She shared a heart-wrenching story about one ELOP client who began visiting the charity in 2015. A 34-year-old Lesbian, she was the victim of abuse for years from her mother, who couldn’t understand why her daughter wasn’t with a man.

“Her mother believed she had a demon inside her, and she was beaten and raped to get the demon out,” Humphreys told the audience of mainly students and staff.

The woman was saved by an understanding uncle and, although still bears the mental and physical scars, she is now happily living with a new partner in the UK. “If you don’t hear that things will get better it can reinforce a feeling of hopelessness,” said Humphreys.

Over 2,000 people a year seek asylum in the UK, based on identifying as gay or lesbian, according to ELOP. “Not understanding who it’s safe to tell your story to is also a common experience,” Humphreys said. “It’s really hard for people to have trust in the system here, due to their previous experiences.”

Another problem is that asylum-seekers often find it difficult to “prove” their sexuality. Is a Lesbian with a child gay? Can you be gay if you’ve never had sex?

“How do you ‘prove’ who you are?” Humphreys asked. “That’s one of the biggest problems LGBTQ asylum-seekers face. It’s very difficult. There is no way to talk about this in a positive and upbeat way.” 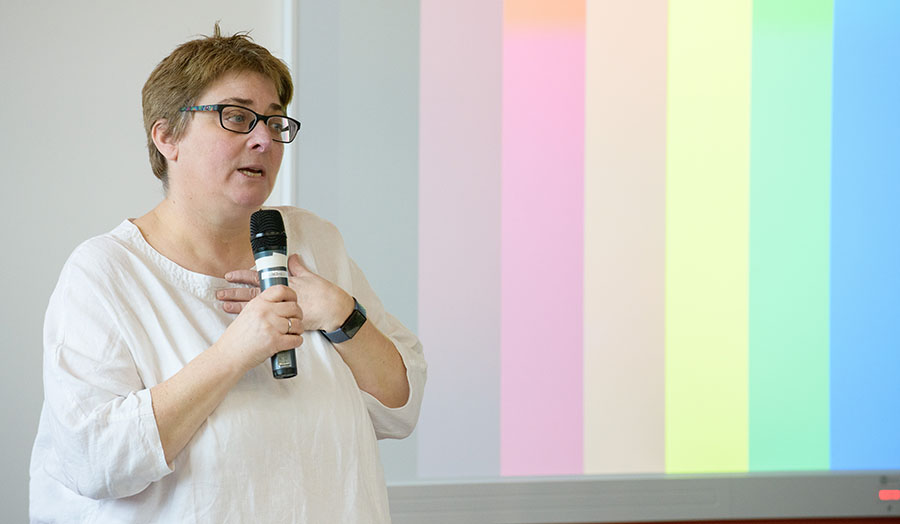