A London Met alumnus has returned to the University to talk to third year Campaign Journalism students about setting up their own campaign.

Jon Quinn is Head of Campaigns for Shelter, a charity based in the UK helping to end bad housing and homelessness. He offered advice to students particularly stressing the risk of failures when spearheading a campaign.

The History and Politics graduate worked in the political arena for 14 years before moving to work with the charity Shelter. “Campaigns are a key part of what we do,” says the London Met alumnus, “a campaign needs a perfect storm of problems” in order to run efficiently.

Jon explained that campaigns have to be run in accordance to with the time and the tools campaigners have available to them highlighting social media as a currently influential medium that can be harnessed to work alongside campaigns.

The campaigner also stressed how current affairs have an impact on campaigns. He noted that in 2010 housing was not an important issue during the UK general election, however now in 2015, “housing is a massive issue.” He explained that campaigners need to be aware of and question why issues vary in importance as time passes and social and economic situations change.

One student asked Jon if he believed Shelter could make a difference. “I wouldn’t be able to get out of bed if I didn’t,” he responded, adding that the key to a successful campaign is for the people behind it to have faith in it if they want others to follow.

Jonathan Moore, Senior Lecturer in Journalism, said: “This was really useful for the students since they have to plan their own campaign as part of the module.

“Listening to a professional campaigner from such a top charity shed light on the do's and dont’s of campaigning is invaluable.”

The talk comes after the journalism enhancement week which enables students to see the industry in action.

You can find out more about studying Journalism here. 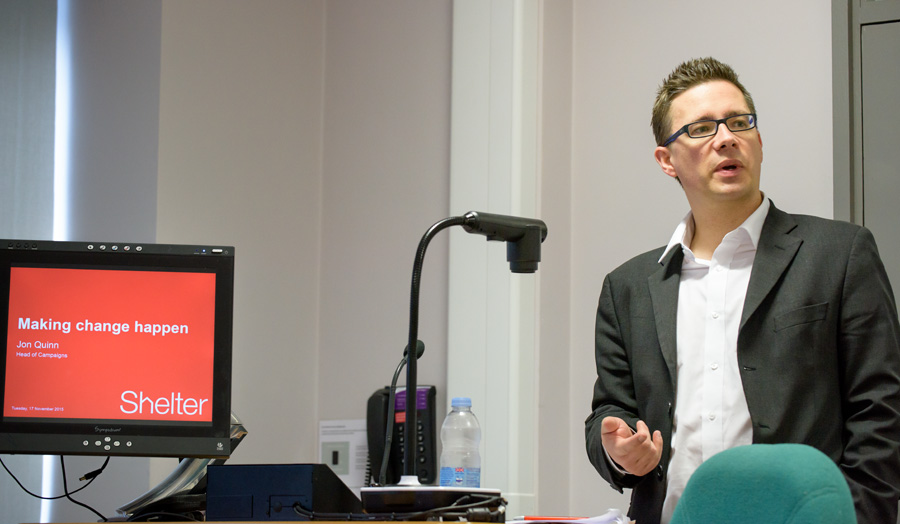