Interior Educators Success News from the School of Art, Architecture and Design

Cass Interior Architecture student Spaska Bondarenko has won runner-up in the Interior Educators Prize for Innovation at the annual awards during the Free Range show.

Spaska, who studied within Interiors Unit 5 with Aberrant Architecture, won for her Project The Wild Institute which focused on York Hall in Bethnal Green.

Her innovative concept was for an institute that allowed nature to take over York Hall in a controlled process, bringing community and science together by allowing the public to experience the benefits of natural wild life in the centre of the city. Under a controlled demolition, redundant parts of York Hall are removed to make way for a new covered public arcade, which is opened up to the local community to explore the local wild plant diversity. The new public arcade over time is transformed into a foraging meadow, which acts as a spatial celebration of the heritage of the site. Utilizing the materials generated from the demolition, the footprints of the former community events which previously occupied the building are recreated through new spaces scattered throughout the landscape that allow the public to learn, forage, cook and feast together. Where scarcity of resources may define the lifestyle choices people make, the Wild Institute plays a central role by providing knowledge and alternative practices in multiple fields.

Interior Educators (IE) is an organisation established by academics representing well-established interior design and interior architecture courses from across the UK. It is a unique group in that it provides a forum for debate and the exchange of ideas and practice effecting the education of designers of interior space. Every year London Metropolitan University exhibits at Free Range, which is the UK largest and only collective exhibition of the best work produced by graduates from the leading national undergraduate courses within interior architecture and design. 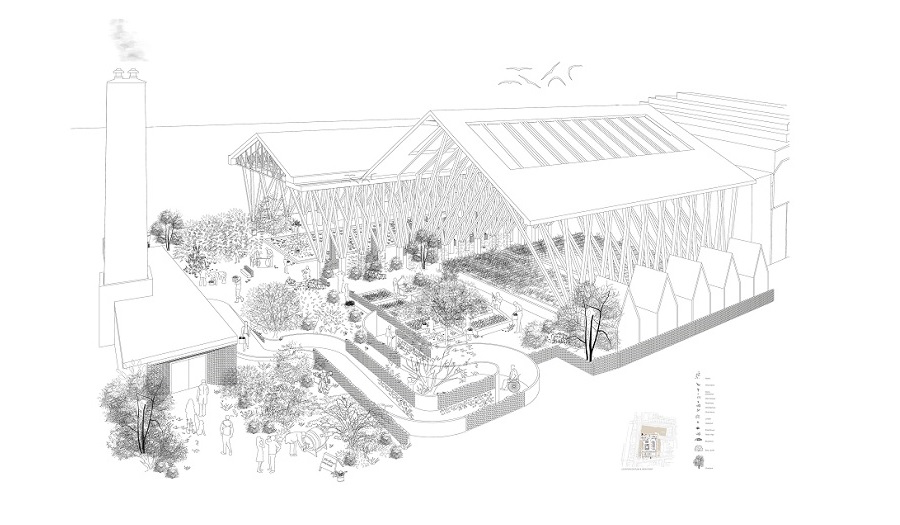