How clearing helps students to do something they love News

We meet some London Met students and graduates who joined us through clearing and have never looked back.

Bianca Giunta has embraced London Met life, including serving as a Student Ambassador.

Thousands of students find a university place through clearing every year. For those who have done better than expected in their exams, have only just decided to go to university, want to change courses or have missed out on their first choice, clearing can be the answer.

For many students, clearing has proved to be a life-changing opportunity. Here, we meet some London Met students and graduates who joined us through clearing and have never looked back.

“I changed my mind about my course”

Megan Lees entered clearing in 2010 because, like many students, she wanted to study a different course than the one she had applied for.

“I had a confirmed place at the University of Leeds to study Social Work but I changed my mind and decided that I really wanted to study Psychology,” she said. “By the time I had made this decision, it was too late to change my applications, so I had the option of applying through clearing.”

Megan found the idea of clearing really daunting, but the process proved to be stress-free.

“I remember being pretty stressed out the day before clearing; I was panicking that I wouldn’t be able to get through to anyone! But the process was easy and speaking to someone made me feel a lot better.

“I would advise students applying through clearing to have what you want to say noted down, as you are likely to be asked why you want to do the course etc, and it helps to have it written down in front of you! They will also ask you about your exam grades too, so make sure you have them to hand.”

It’s a good tip to note – but if you are in Megan’s shoes, remember that you can call universities’ clearing numbers any time - you don't have to wait for A-Level results day. London Met’s clearing hotline is open now.

“I loved my time at London Met,” Megan said. “Obviously being a student was hard work but also loads of fun. I made some really good friends and had the best time! I found the course itself really, really interesting, and I took a lot from it.”

Since graduating Megan has been on a two year graduate scheme for a media research agency in central London. “We carry out bespoke research for a number of huge companies such as the BBC, Warner, ITV and Google,” she said.

“I wanted to stay near my family”

George Sealey, from Essex, rejected his first choice offer in order to study in London, closer to his family. He came to London Met through clearing in 2011 to study Mathematics in the Faculty of Life Sciences and Computing.

“I was not too sure what to expect from clearing,” said George. “However, with some help it was easy enough to call around the universities to find out their entry requirements. From there it was simply a choice of choosing which university I felt most suited me.”

Having found a course that excited him, George began his studies in September 2011. “I found my time studying at London Met to be an amazing growing experience, both personally and professionally,” George commented.

“I enjoyed the wide variety of modules I had to pick from and feel my course was very beneficial. The skills I developed have definitely aided me in finding a job since graduating.”

Since graduating George has had two roles, as a finance assistant and then moving into a data analyst position.

Speaking to students who are entering clearing this year, George said: “No matter where you end up studying you will find success as long as you dedicate yourself so try to have a good time and enjoy your university experience as best as you can. Good luck!”

“It was a late decision to go to university”

Youth Work BSc student Charlene Sagoe applied to the London Metropolitan University through clearing in 2012. From Cheshunt in Herefordshire, Charlene was uncertain of what path she wanted her career to take, other than knowing that she wanted to help others.

“I knew I wanted to go to university but I wasn't very sure about what or where I was going to study. I wanted to study a course that would allow me to help others but I wasn't aware of what was really out there. I applied to London Met late during clearing and spoke to a member of the clearing team about what I was interested in and she told me to take a look at youth work courses.”

The youth work course at London Met turned out to be exactly what Charlene wanted to study.

“From my very first lecture I knew this was what I wanted to learn and study. I enjoyed youth work as it allowed me to not only learn about working with young people but to also to work with them through the various course placements.”

Charlene recommends picking up the phone and talking to clearing advisors if you are unsure of the opportunities available. “It's not too late to find the course suitable to you,” she said. “Speak to an advisor on the clearing team and they can help get you onto the right path for you.”

“I wanted to study in the UK”

Bianca Giunta also made a late decision to go to university. The BSc Psychology graduate was living in Italy at the time, so she searched the UCAS website to find universities that had clearing spaces for the course she wanted to study.

“I found the process very simple, easy and intuitive. A few days after I expressed my interest in studying at London Met, I was contacted by the University and offered a place,” she said.

Her route to London Met through clearing has given Bianca the same starting point as everyone else. “I found my studies very interesting and challenging in a way that kept pushing me to want to improve myself and advance my education and knowledge was well as enhance my life skills.

“During my course I co-founded and was president of the University’s Psychology Society and got involved in as many university activities as I could, such as being a Student Academic Representative (StAR); being part of the student council; being a Students’ Union board member; working as a Student Ambassador and being a coach for first year students as part of the University’s new Peer Assisted Student Success (PASS) scheme.

“Now that I have graduated I am starting to work as research intern for the University before starting my Master’s.”

Bianca believes that coming to London Met through clearing has changed her life.

“Clearing is a great opportunity for people to find their best chances at success. Being part of London Met has changed my life completely: it has given me the confidence and the real world skills I need to progress and develop myself further, and none of this would have happened if I hadn’t participated in clearing.”

“I wanted to come back to education as a mature student”

Many mature students have lots of responsibilities that place pressures on their time; juggling childcare and a full-time job, for example, can make finding time to join the UCAS application process difficult. Clearing offers a valuable chance to find a university place quickly and easily.

Kiki Tang decided to return to education as a mature student to change her career and explore her creative side, and took the clearing option.

Kiki was offered places at London Met's Cass Faculty of Art, Architecture and Design, and at the London College of Fashion.

“I chose London Met because of the Jewellery course,” said Kiki. “I never thought I could apply for university so late but it was made easy at The Cass.”

By coming through clearing Kiki was able to secure a place on the unique jewellery course she wanted.

“It’s been an amazing experience,” she said about the course. “We have had the best workshops, the tutors are really nice and helpful, and everyone was willing to help you if you needed it.

“I feel it’s like being in a family at London Met.”

Kiki graduated with first class honours this summer. During her time studying she was nominated as a ‘bright young gem’ across UK new designers and won representation with the Blow PR agency.

“I’ve already received a lot of media publicity and won three awards for my final projects, displayed at the summer show and launched my brand; Kiki Tang Jewellery.”

“Follow your heart and believe in yourself and your dream will come true.”

Find out if London Met has the course for you. 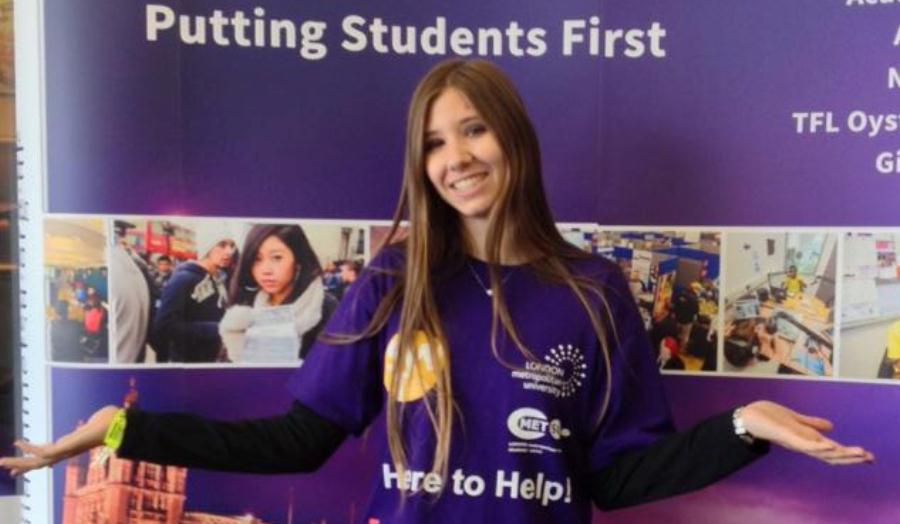