Hayes News from the School of Art, Architecture and Design

Architecture Studio 3 continues to work in Hayes this year, concentrating on its light-industrial fringes. The work develops previous work with the Austin Housing Estate (2011/13) and High Street backyards (2014/15), both sites adjacent to this year’s industrial sites.

This year, Studio 3 is particularly interested in patterns of work and workspaces in Hayes. Some of the industrial areas are still thriving places where things are made, stored, assembled or maintained; others have been abandoned, and are awaiting a new life. Given the planned arrival of Crossrail in Hayes, developments will in most instances centre on housing with some office spaces, rather than a replacement of the workshops and yards. Architecture Studio 3 will speculate on what work spaces in the area could and should entail, and what workspaces for Hayes’ existing populace could become.

The industrial areas being investigated frame Hayes town centre and stretch out east and west along the Grand Union canal. To start off the year they will be working with The Sharks, a canoe club operating in the wider area, which wishes to establish a local hub in Hayes. The studio met with Neal Underwood, Club Development Officer, and his colleague Rob who took the students kayaking along the canal in Hayes; past recently closed factories, housing developments and surprising spots of wilderness with herons and blackberries galore. Studio 3 is now exploring options for a shelter where the boats are stored, and the children can meet for paddling sessions on the canal. There is also potential that one of the proposals will be realised as a live project, since the club has funding for development.

As well as working with The Sharks, the Studio has meet with Hayes Partnership Chair David Brough, who introduced the students to the local history and current developments in the town. 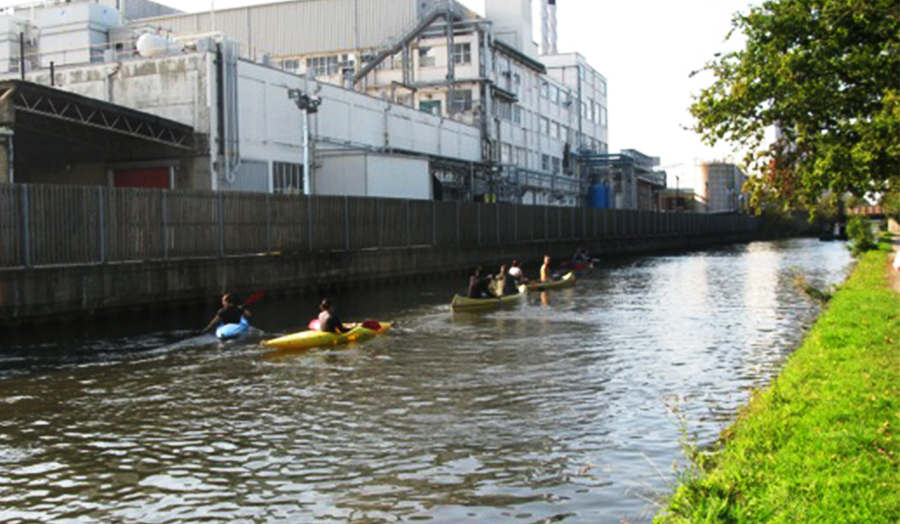