London Met lecturer and students help young people in Camden make films to be screened at The British Museum.

Students from London Met are putting their skills to good use by supporting an important local community project.

BA Digital Media and BSc Games Modelling, Animation and Effects students are taking part in Camden Summer University (CSU) – a project run by Camden Council to support young people from across the borough.

The students, and London Met lecturer Suzanne Cohen, delivered filmmaking sessions during the project, which is run in collaboration with speech and language therapists from Whittington Health NHS.

Suzanne, who teaches on BA Digital Media at London Met, has been leading workshops for the CSU since 2009, and helps the students create films which are screened at The British Museum.

“I really enjoy running the film projects at Camden Summer University,” said Suzanne. “I run four one-week courses, each with a new set of students in a different area of filmmaking.

“It's fun but intensive - the students need to complete their films within a week before they are screened at The British Museum – but it’s a great opportunity for them to show their work in front of an audience and to see how they react to it.”

One of the four weeks supports young people with learning difficulties.

Paul James, a BSc Games Modelling, Animation and Effects student, also worked at the CSU alongside Suzanne. He said: “I worked with Suzanne on a project for the Camden Council Family Support service earlier this year and was then fortunate enough to be invited to help out with the Summer University.

“I really enjoyed being involved and I've been inspired by the creativity and motivation of the students that took part. I'm now looking forward to seeing their work at the film festival later this week.”

A documentary from last year’s selection exploring sexting, ‘Young People, Relationships and the Law’ is now a recommended resource on the National Curriculum and this year’s programme is just as fresh and exciting.

Pictured: Ahmad Al-Rashid, a Syrian refugee, interviewed by students for 'Refugees in our eyes.' 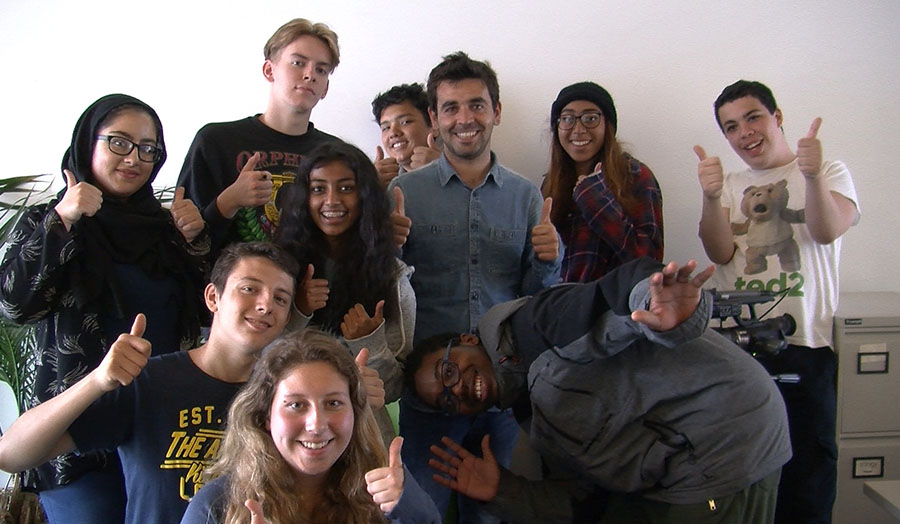