Feel the discourse! News from the School of Art, Architecture and Design

An exhibition, curated by MACC alumna Cristina Ramos, that brings together visual art and contemporary writing in an attempt to perform criticism in a different way.

"‘Seeing’ says John Berger, ‘comes before the words.’
-
Wrong! Says the evangelist. ‘In the beginning was the Word.’
-
‘Both wrong!’ says the poet Shelley, refuting the very notion of priority. Not the seeing before the Word, not the Word before the seeing, but a simultaneity of perception and creation; the thing outside no sooner apprehended than it has become the thing inside. [...]
-
To the modernist question - Is there anything out there before the artist puts it there?
-
Shelley offers, for my money, the only rational answer: yes and no.
-
‘And that’s the story of this exhibition,’ proclaimed the Exhibitions Secretary of the Royal Academy of Arts in a recent interview: “how America seized the leadership of the discourse of art, the international discourse of art, the language. [...]"

An extract from ‘Seeing with the Ear’ by Howard Jacobson, 1993: Claridge Press.

Feel the Discourse! is an exhibition that brings together visual art and contemporary writing in an attempt to perform criticism in a different way to the one usually encountered in the art gallery - principally by divesting the author from the task of reviewing the whole exhibition; instead the writers are invited to turn their attention to a single artist.

The exhibition will begin with the display of the artworks without any written context. Then the writings will be presented in a setting designed by furniture maker Tiago Almeida. This will be followed by an introduction to the exhibition by Sebastian Rozenberg and a performance by Tamara Kuselman.

The exhibition aims to create a space of consciousness in Guest Projects, inviting the viewers / readers to participate in the meaning-making, as they are aware that the works on show will be written about.

Ultimately, a publication will be produced in collaboration with the book-maker Patricia Vega, leaving a trace of the exhibition and of its writing. 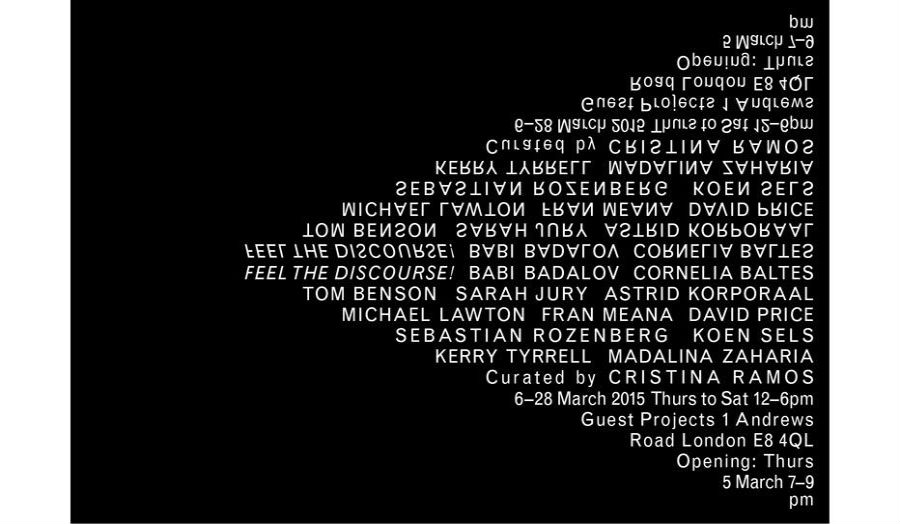