Each year Chevening awards over 1,800 scholarships to students from all corners of the world to study in the UK for one year at a Masters level. The scholarship received over 27,000 applications in 2014.

This year, for the first time, London Met is proud to welcome not one but seven Chevening Scholars from across the world.

Jose Doria Pupa Neto from Brazil has joined London Met’s Guildhall Faculty of Business and Law to study an MSc in International Banking, Finance and Compliance.

“Getting to network with a vast number of students from various places and backgrounds will definitely add value to my career and plans ahead” says Jose.

The award scheme offers successful candidates a chance to study in the UK and to develop network links that will prompt them to become world leaders.

Chevening Scholars are encouraged to study subjects in the areas such as finance, media and economics.

The Brazilian scholar explains that he wanted to study something “in depth” that wasn’t purely finance, “I wanted to study The practical aspects too, and classes using the Bloomberg suite, for instance, makes it more interesting and prepares the students for real-life work issues.”

He chose to study at London Met because the course puts theory into practice.

“While I was reviewing different universities’ public administration courses I did not come across any which would emphasize practice oriented teaching as much as the MA in Public Administration at London Met,” he says, “the work placement module particularly attracted my attention.”

Chevening encourages applicants to choose the course and university themselves, she explained. She chose London Met because the course is taught at a high standard and offers good quality education. The MPA in Public Administration offers a work placement module which she finds useful because you get real work experience while you study.

Pagna Ukthaun is studying an MSc in Business Innovation and Creative Entrepreneurship. Her course is small with a very international student body which she is enjoying as they get to learn from each other.

Originally from Cambodia, Pagna applied for the Chevening Scholarship after deciding she wanted to study in England. She looked to chose a course that “inspires” her found that at London Met.

“The course is amazing” she says, “there are only six people in our group this year, but we are all from different countries and backgrounds which make it very inspiring to learn more from each other.

“The course itself designed in a very interactive way, we learn in small focus groups with lots of discussion and interaction between students and lecturers.

It can be daunting.

The Chevening Scholarship recognises that it can be daunting to move to a new country alone so they have set up the Buddy Scheme which pairs up current scholars with alumni.

The scheme aims to help current scholars settle into their new environment by developing a relationship with someone who has a shared experience with them.

The award scheme also allows for the scholars to stay with a native family allowing them to experience the culture and develop relationships to enhance their stay in the UK.

Funding comes from the Foreign and Commonwealth Office as well as partners of the scheme. 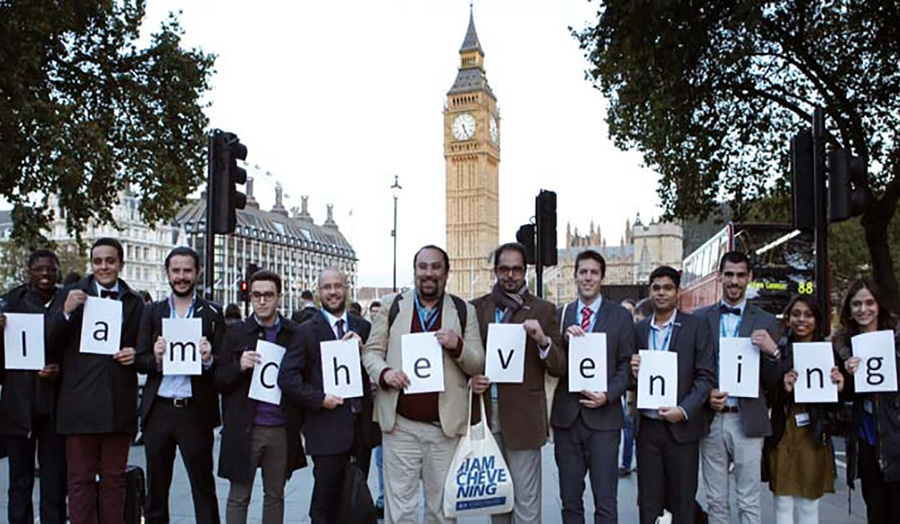