London Mayoral candidates visited London Met to answer questions on how they would improve the city.

Contenders for the Labour Mayoral candidacy Diane Abbott MP, David Lammy MP and Christian Wolmar came to London Met on Thursday 28 May to answer questions from over 100 staff, students and external guests about their vision for an improved London.

The event was timed to coincide with the launch of a new book, Changing London: A rough guide for the next London Mayor, which has gathered ideas from Londoners into several big visions for the city.

Candidates kicked off the evening by building individual pictures of why they want to be the next Mayor of London.

Transport journalist, Wolmar quoted Noel Coward - “I don’t know what London’s coming to - the higher the buildings the lower the morals”.

“I want a mayor who cares about London for Londoners,” said Wolmar, “to make it more affordable, liveable, and sustainable.”

Despite 28 years as MP for Hackney North and Stoke Newington, Abbott said “A vote for Diane Abbott is not a vote for politics as usual, it’s a vote for inclusivity in politics.” As Mayor of London, Abbott would campaign for rent controlled housing, a London living wage and to eradicate social cleansing.

Labour MP for Tottenham, David Lammy, explained that he understood London from many of its multiple angles, having required social support, worked for KFC and attended university in the capital. With Lammy as Mayor he says, you would get more play streets, an extended right-to-buy scheme for and more youth mentorship.

The event was chaired by Richard Evans, a Senior Lecturer in Journalism at London Met, who after the candidates’ introductions opened up the floor to questions.

The first question asked the candidates how they would tackle zero-hour contracts. Lammy and Wolmar both spoke of how they would use procurement and contracts made by City hall to influence the labour market. They also made it clear that the Mayor had no power to legislate on the issue. Abbott claimed she would go further and outlaw zero-hour contracts in City services and refuse to work with service providers who use them.

Rosie Ferguson, Chief Executive of London Youth, was also in attendance at the event. She summarised the issues faced by young people she works with. She described a lack of support for youth, with many services lost in statutory cuts.

Abbott was the first candidate to commit to reinstating the Education Maintenance Allowance (EMA), and stated she wanted Youth Services to be made statutory.

“It was tough in the eighties, and it’s tough again now” said Lammy who would introduce more breakfast clubs, after-school clubs and a statutory duty of care for young people. Wolmar spoke of his concern for youth obesity in the capital and would encourage city-wide behaviour change.

Questions from two other organisations attending the event, My Fair London and The Equality Trust, highlighted how London was the most unequal city in the UK. They asked candidate hopefuls how they proposed to tackle the problem of inequality in the city.

Tackling inequality was an issue for all candidates. Wolmar took the lead, speaking about his aims to make life more affordable by bringing up incomes through the widespread adoption of the London Living Wage or creating a London specific minimum wage.

For Abbott, the key to tackling inequality is through education and housing, reiterating her aims to bring back the EMA she also mentioned her policy against property purchases in London by Non-Domiciles.

Turning to a national area of concern members of the audience questioned candidates on the state of health care in London and how the Mayor could help combat this.

“Tackling the big public health issues like smoking and childhood obesity is the only way to ease the pressure on the NHS,” said Abbott. She would work directly with local authorities to ring-fence health care budgets and ensure that money designated for public health was spent directly on public health improvements.

Lammy would like to see more mayoral control for London’s NHS. “A mayor with his planning powers can do something about the fried chicken shops and the bookies on every corner,” Lammy said, to help combat the rising obesity and gambling problems facing the city today.

The forum was concluded with thanks from Will Horwitz of Changing London, and attendees were invited to enjoy a food and drinks reception where Changing London: A Rough Guide for the Next London Mayor was launched.

The event was organised by Dr Esther Murray, Senior Lecturer in Health Psychology and contributor to Changing London.

The Labour Party Candidate for London Mayor will be selected on 10 September 2015 and election for Mayor of London will be held on 5 May 2016. 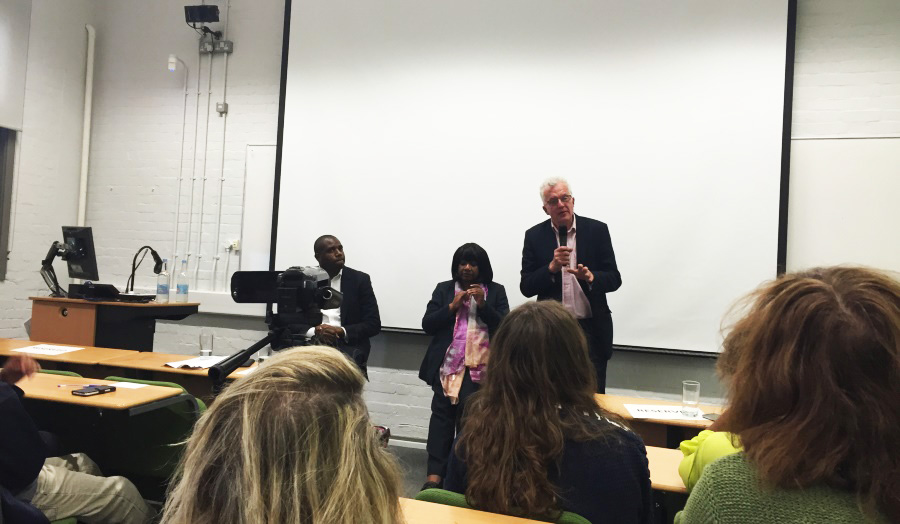