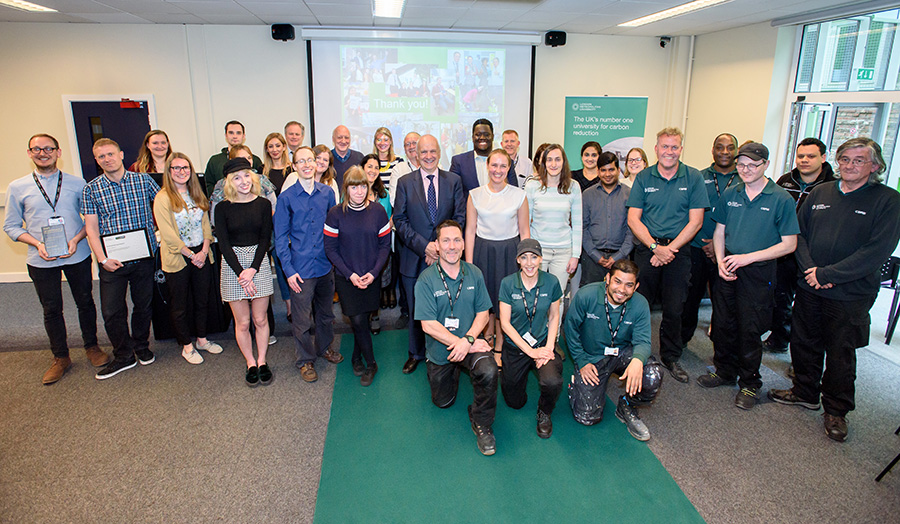 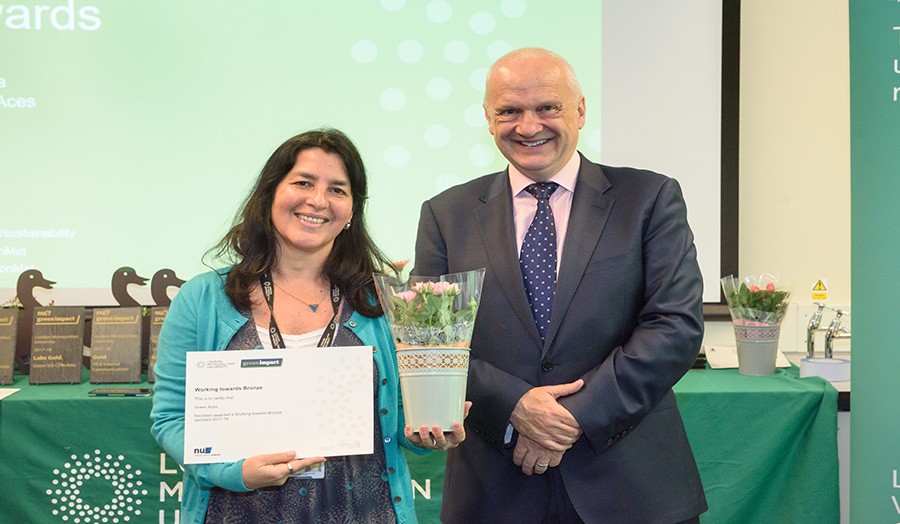 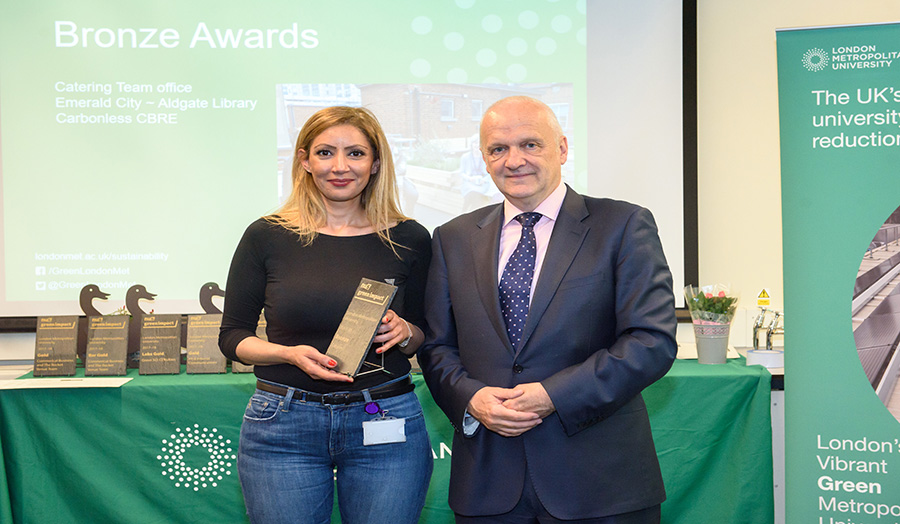 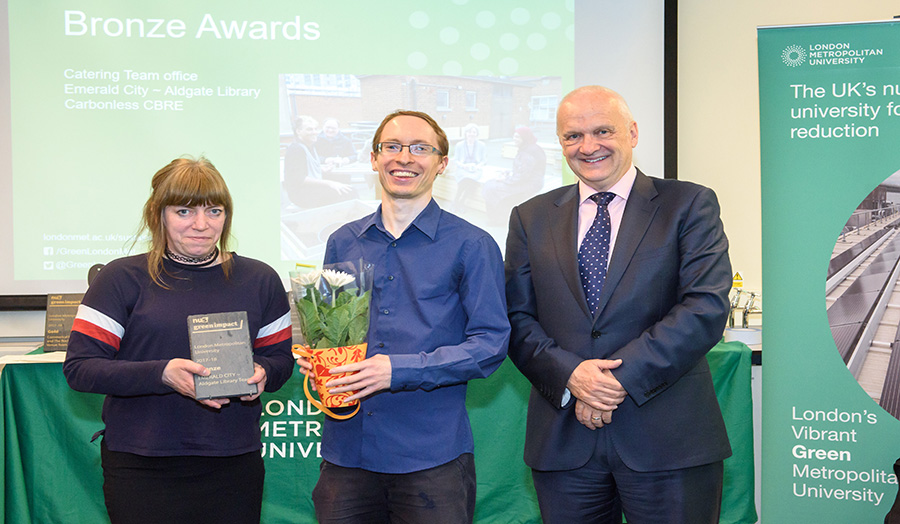 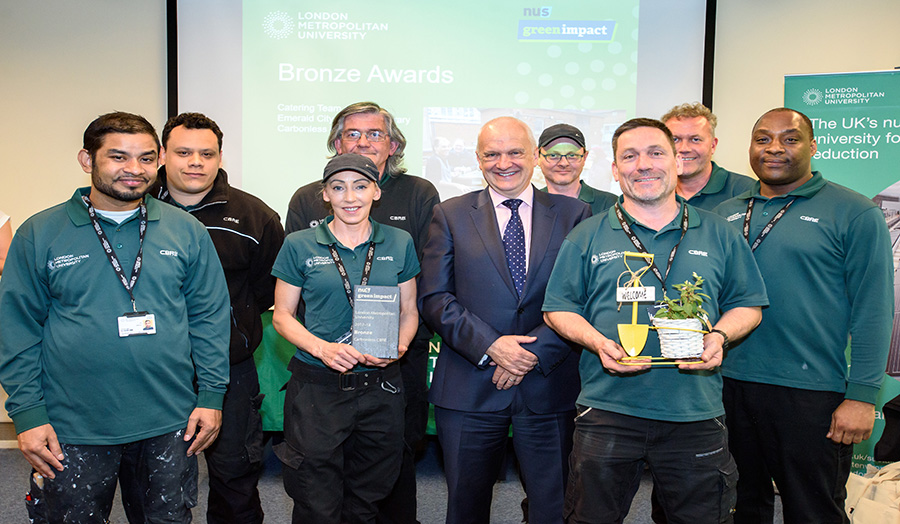 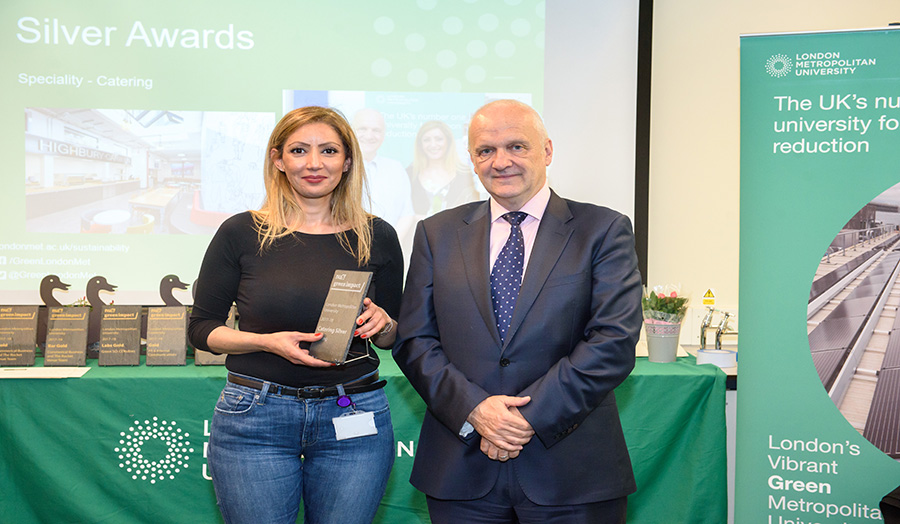 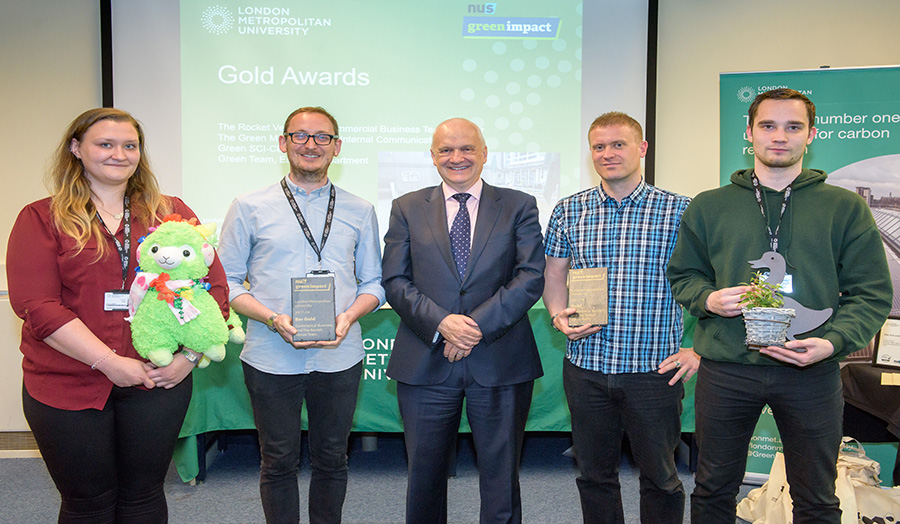 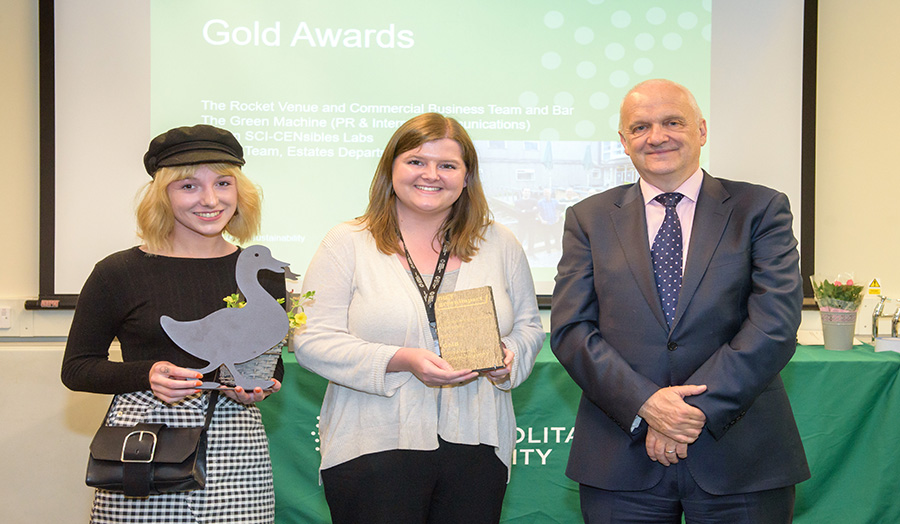 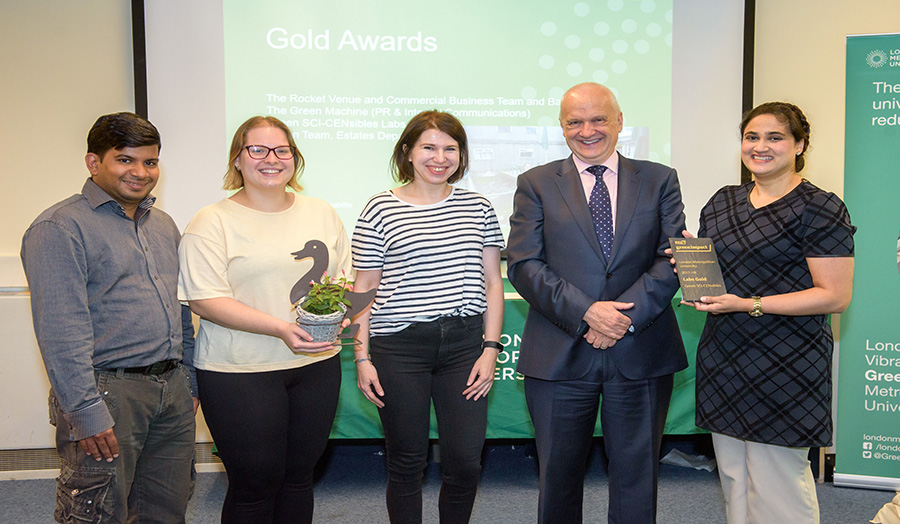 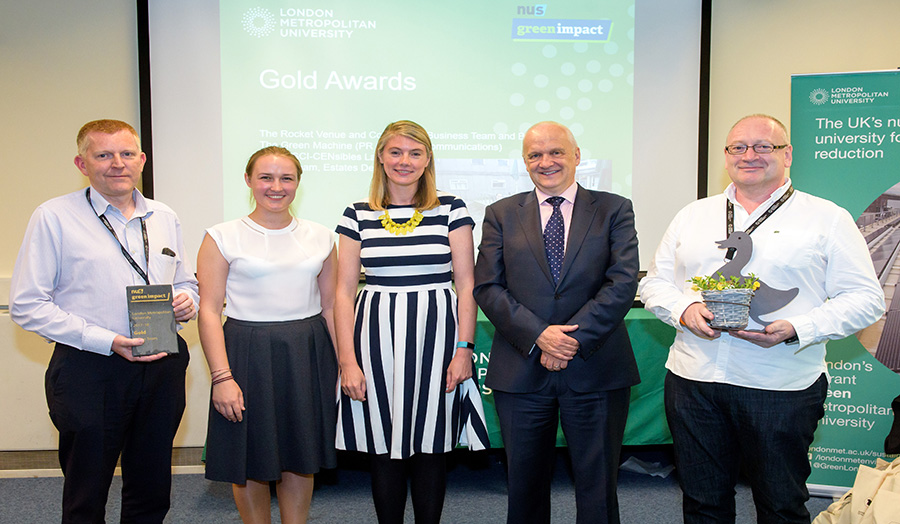 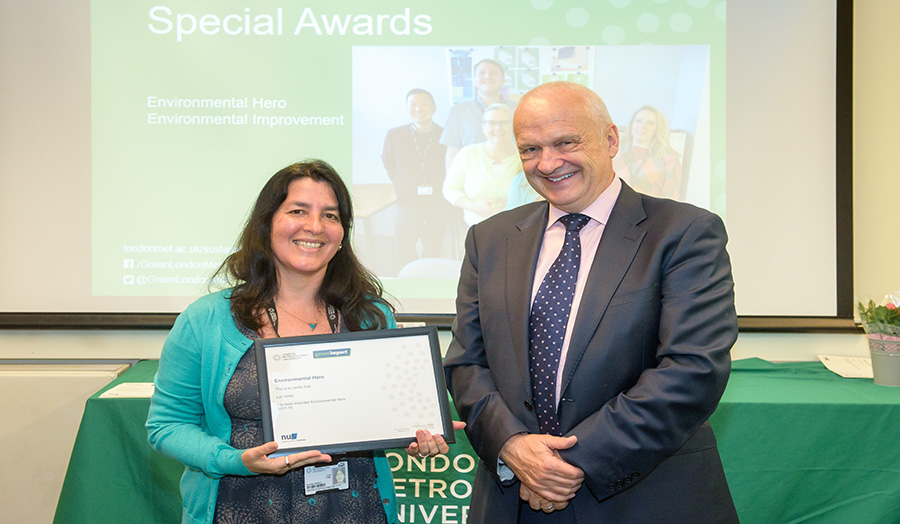 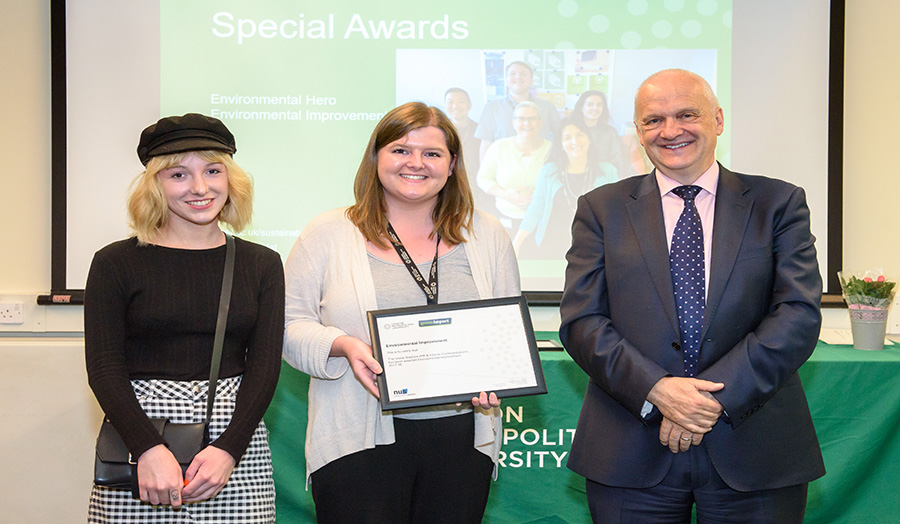 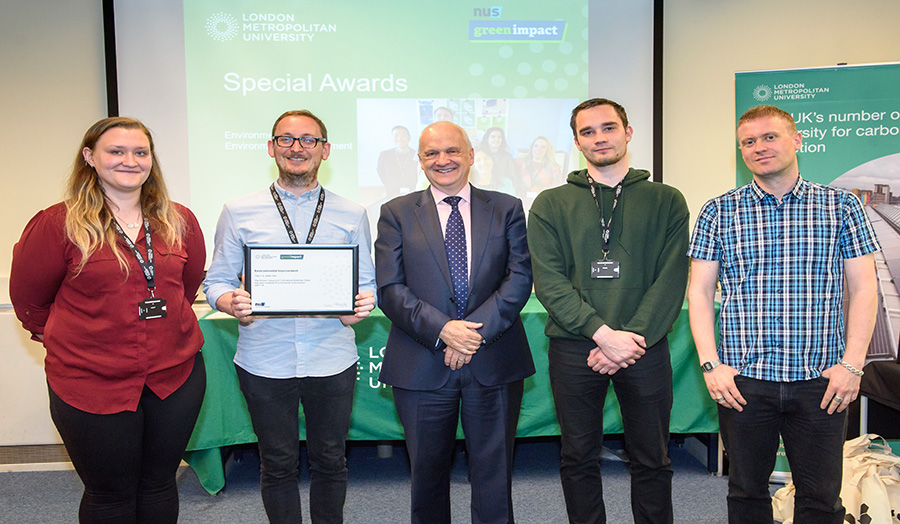 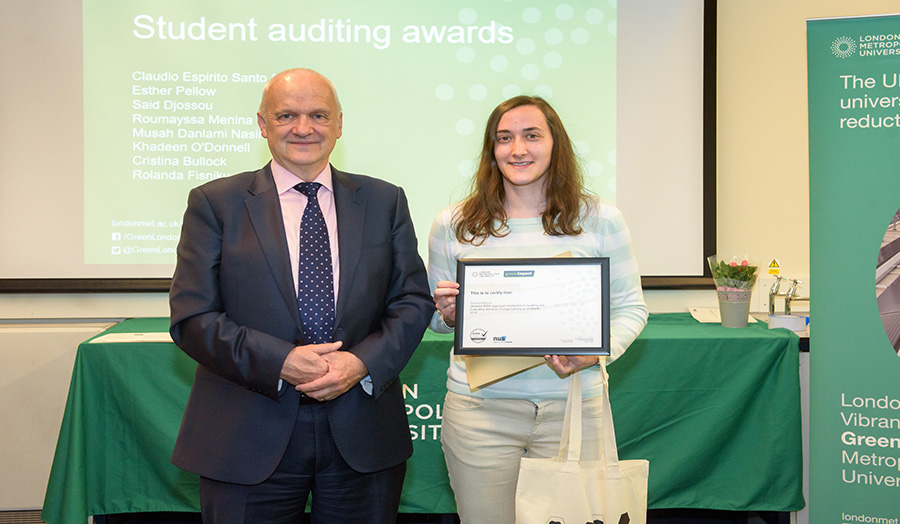 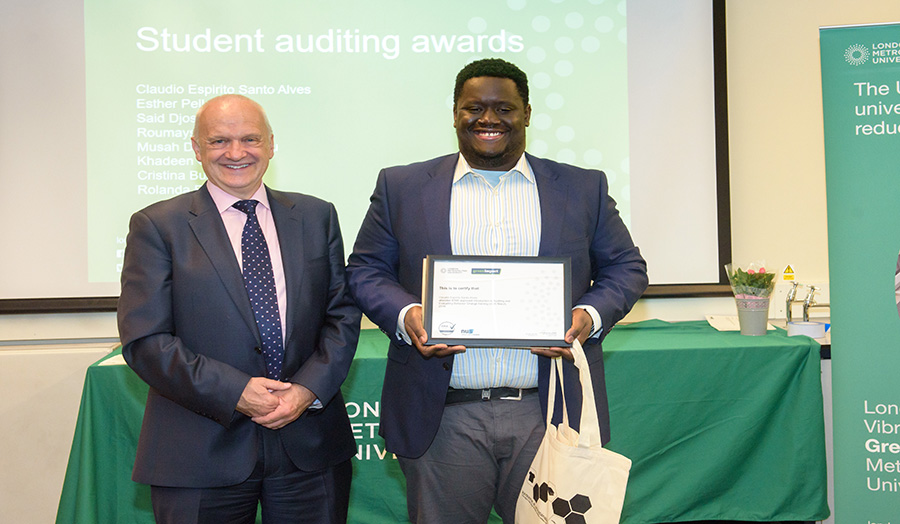 The annual Green Impact scheme came to a big finale on Friday 25 May 2018. The achievements of staff across the University were celebrated.

Staff at London Metropolitan University came together on Friday 25 May to celebrate the sustainability work achieved by departments across many different areas of the University.

The awards were celebrating the result of the annual Green Impact scheme, an initiative developed by the National Union of Students (NUS) which encourages staff from universities across the UK to think about their environmental impact and do more to reduce it. Staff who took part are provided with an online toolkit which they work alongside the Sustainability Team to implement the actions.

Rachel Ward, London Met’s Sustainability Manager, said: “It’s great to see so many staff from across all areas of London Met get involved with Green Impact. What I enjoy most about this is seeing how colleagues can get creative from the comfort of their own workstation!

“This academic year has been one of the strongest for sustainability. We’ve really been looking at our environmental strategy and updating this to reflect the needs of the University today.

“Some of our key achievements this year have been working with the Students’ Union to introduce a roof garden at our City campus for students and staff and obtaining London Met’s Fairtrade Status.”

Teams across the University have been getting stuck in with doing their bit for the environment. With actions ranging from removing plastic straws from the University bar to removing a water cooler from the Vice-Chancellor’s complex to reduce single use plastic waste, the achievements have been more creative than ever.

All teams have made fantastic efforts to reduce their environmental impact by doing various fun activities! For example some teams took part in walking meetings where others started to cycle to the University. CBRE team challenged each other to grow their own chillies in reused coffee cups but Aldgate Library Team actively raised awareness of students and staff’s commitment to the environment with their #GoGreen information board! Everyone been so engaged with raising awareness and getting involved and we had some great newcomers this year – Labs and, Vice-Chancellor’s office wo showed their passion for making a change in their workplace.

The initiative will continue into the 2018/19 academic year. If you are a London Met staff member and are interested in getting involved and doing your bit for the environment, please email sustainability@londonmet.ac.uk to find out more.

With thanks to the 2018 student auditors: