Professor Terry Wilkins has been made a Fellow of the Royal Academy of Engineering.

A London Metropolitan University alumnus has recently become a Fellow at the Royal Academy of Engineering.

Europe’s first Professor of Nanotechnology Manufacturing, Terry Wilkins, who is an academic at the University of Leeds, graduated with a BSc Chemistry degree from the Northern Polytechnic, a predecessor of London Met, in 1969.

Commenting on the beginning of his career, Professor Wilkins said: "I really wanted to be able to use leading edge science and engineering to create new technologies to make a real difference to people’s lives.

"The University [London Met] gave me the theoretical and experimental tools to do this along with the self-confidence that I could do it, but importantly, the realisation of that innovation can only be done by collaboration."

Professor Wilkins gained his BSc at the Northern Polytechnic whilst working at the UK’s Atomic Energy Research Establishment in Harwell, Oxfordshire.

"After finishing my BSc, I went back to Harwell and was told by my friends there was a glass ceiling for promotion and was advised to study for a PhD, which I duly did," explains Professor Wilkins.

"Despite offers from other universities, I chose to do my PhD at the Polytechnic and was funded by a local authority research fellowship. Unlike other research students on Engineering and Physical Sciences Research grants, I had to do a lot of teaching, which I liked."

Following his PhD, Professor Wilkins moved into industry at GE Healthcare, where as engineer, scientist and innovator, his research led to world-beating methods for the early detection and management of diseases such as thyroid disease and prostate cancer. His high-throughput chemiluminescence immunoassay system has applications in the treatment of a range of health issues, including oncology, gynaecology, haematology, metabolic and infectious diseases and widened the access to the best clinical diagnostic methods for patients worldwide.

He returned briefly to academia to lead research and innovation at the Nobel Laureate Christian De Duve’s Institute in Brussels, creating spin out companies.

Later, he re-joined industry at ICI, where Professor Wilkins’ career highlights include establishing the world’s first and most successful DNA fingerprinting business, Cellmark, alongside Sir Alec Jeffreys, Emeritus Professor at the University of Leicester, and Sir Alex Markham.

Professor Wilkins’ career has not only brought innovation in medical treatment, but also in environmental issues at ICI. His research led to a 99% reduction in organic chemical pollution in the River Tees. The method by which this was achieved has since been replicated worldwide. His team’s work developing the manufacturing of HFC refrigerants has led to a global business and the UN in 2014, acknowledging it has led to the healing of the hole in the ozone layer. From ICI he returned to academia as Professor of nanotechnology manufacturing at the University of Leeds.

Success as an industrial innovator has led to Professor Wilkins’ service as a high-level expert advisor and committee chair to the UK government since 1992 including to the Minister of Science & Universities, the European Commission and the EU Parliament, covering nanotechnology, advanced materials and production technologies.

He has also won numerous awards during his almost five decade career, including two prestigious Prince of Wales Prizes for Innovation and Production.

Professor Wilkins remembers his time at London Met’s predecessor, both as an undergraduate and as a research student, with great affection: "I loved the high quality teaching and experimental work. I found that quantum theory, statistics and physical chemistry were well taught at the Poly. On the social side the folk and blues club were real fun. Sports facilities were excellent enabling me to compete at national level in Judo."

He recounts one lucky accident: "During my PhD research I made a lot of compounds that were highly sensitive to air and water. On one occasion I synthesised the most difficult and reactive one of the series. I sealed it up in a large glass ampule and weighed the ampule and the glass end on a standard lab balance. I then noticed the sealed off end had started to smoke. The next thing that happened was a bang. The ampule smashed through the glass side of the balance, took off like a rocket and blew up when it hit the side wall 20 meters to my right! I had unintentionally made a wonderful solid fuel for rockets!"

Professor Wilkins’s most recent achievement is to become a Fellow of the Royal Academy of Engineering. Professor Dame Ann Dowling, President of the Royal Academy of Engineering commented: “Our new Fellows represent the very best of UK engineering. From technology giants to our universities’ finest minds our new Fellows demonstrate how engineering is tackling some of the biggest challenges facing the world.” 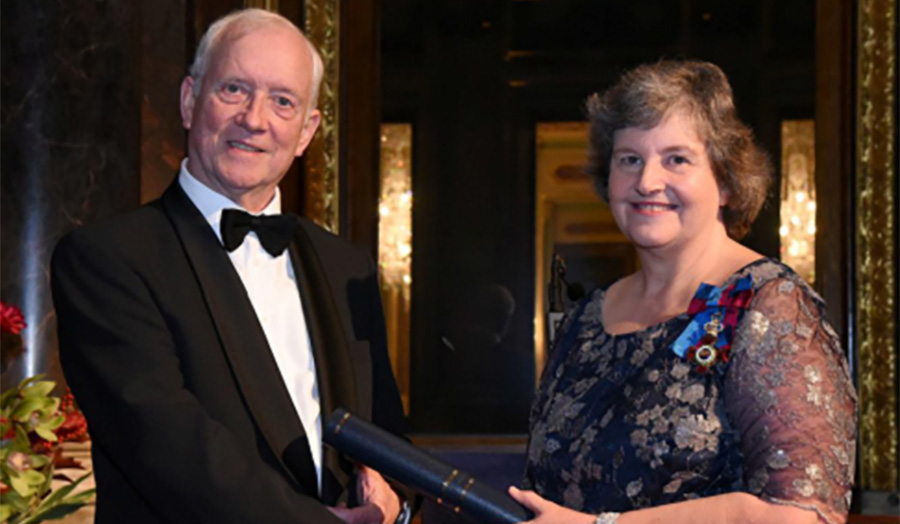