Autocracy as a curse

Putin's decision to mobilize and send hundreds of thousands of people into the meat grinder of war for vague and contradictory goals, whether it be fighting the "collective West", building “Novorossiya”, or protecting the inhabitants of Donbass from the "Nazis", has once again raised the question of the nature of Russian power and the reasons behind the evil that it has unleashed. Where did the willingness to send its own citizens to their deaths and kill the inhabitants of a neighbouring country, to turn Russia into an international pariah, to finally finish off the already weakened economy come from? Has Russia turned into a fascist state, or is what we are witnessing a manifestation of its imperialist nature?

Attempts to explain what is happening in terms of some fascist ideological project or as a replication of European colonial wars for territories and resources are complicated by the fact that the current Russian government has no explicit ideology, and it is difficult to talk about the colonial nature of the war when the regime ruthlessly destroys the resources of the territories it seeks to annex. What the authorities are doing is better described in other, more ancient and familiar categories for Russia — autocracy and arbitrariness (proizvol).

The ruler with no limits to his power, with a weak, obedient court (which we saw during the grotesque meeting of the Security Council on the eve of the invasion of Ukraine), unleashes a war for which, apart from his own will, his grievances and fears, there are no understandable reasons.

Power for the sake of power, which does not need ideology and morality, takes us back to the world of the Machiavellian Prince, in which the strong either devour the weak, or are devoured themselves. Machiavelli's power is immoral and pragmatic, people here are nothing but a resource for the implementation of the plans of the autocratic demiurge. Schopenhauer and Nietzsche wrote about the will to power as the driving force of human life and history. But the essence of power is best described in fiction, which portrays living beings, made of flesh and blood, with their vanity and cruelty, fear and loneliness.

Among the best fictional representations of autocratic power are Pushkin’s Boris Godunov, Marquez’s The Autumn of the Patriarch, but before them there was Shakespeare, with his historical chronicles, as well as Hamlet, Macbeth and King Lear. Power in Shakespeare is not about ideas or morals. For the English playwright, as the Shakespearean scholar Jan Kott wrote, “power has names, eyes, mouth and hands. It is a relentless struggle of living people who sit together at one table”.

Power, like a venomous substance that poisons everything around it, drives these people and distorts their characters, compelling them to commit cruel reprisals, devise conspiracies and start wars. Power dictates its own laws of behaviour. In this sense, the psychology of autocrats is a derivative of power, and if they lose power they themselves disappear or become indistinguishable from beggars and jesters, like the tragic King Lear (or, in a more farcical modern version, Dmitry Medvedev).

Putin — once an inconspicuous official, little-known outside St. Petersburg –has, over the twenty years since his arrival in the Kremlin, turned into an archetypal villain. Sometimes he is spoken of as a character from modern popular culture, Voldemort or Darth Vader. But he is more like Richard III. Short, with unremarkable looks, with quiet but unsettling manner of speaking, with a strange lopsided gait — Putin even looks like this tyrant. Shakespeare's Richard imprisons or kills his real and suspected rivals, those with whom he came to power and those who may yet become contenders for the throne. There is no greater imperative in his life than to win, to insist on his will, to put the squeeze on those who resist him. At the beginning of the play, Richard forces the widow of the king he has killed, who feels nothing but hatred towards him, to share his bed. This brings to mind Putin's appeal to Ukraine: “Like it or not, bear it, my beauty”.

The sovereign makes history, but he is often the victim of it. His endless nightmare is the fear of losing power, and with it his life. The empty streets along which the ruler travels, the long tables at which he communicates with others — all this betrays the fear of violent death. Putin is terrified of the fate of the murdered Gaddafi, who lost power and at the last moment was ready to give everything to the rebels to save his life. Similarly, defeated in battle, Richard III cried: “A horse, a horse! My kingdom for a horse!” Putin clearly cannot accept the overthrow of another ruler, Yanukovych, by the Ukrainian Maidan (and, in his version, by conspirators supported by overseas enemies) and declares almost openly that his invasion of Ukraine is revenge on those who, in his opinion, carried out a coup d'état.

Shakespeare's ruler operates in a world in which it is impossible not to kill. Moreover, the ability to kill is the highest expression of power. Macbeth, having overcome initial doubts, rises above the limits of human experience through murder. After that, all he has left is contempt. Rejecting humanity, the ruler plunges into a world of deadly cynicism. Let us recall the peculiar humour of the Russian leader: a playful threat to amputate a Western journalist’s genitals so that “nothing will grow again”, or his admiring words about the Israeli President Katsav, “"Give my greetings to your president! He turned out to be a really powerful guy! Raped ten women! I never would have expected it of him! He has surprised us all! We all envy him!"

A world of power not driven by any ideals or values is a world without love. As in Hamlet, everyone in it is poisoned by politics that destroys human feelings. There is no place for psychology here, this is a world without embellishment and rhetoric (“What happened to the Kursk submarine?” — “It sank”). There can be no order here except for order created by force. "We have shown weakness, and the weak are beaten." In this world the will is the most important thing — it was not for nothing that Putin recently advised schoolchildren not to be “nerds”, to show resolve and not to think that success can be achieved only through sedentary cramming (as he put it, through “rubber buttocks”).

For a Shakespearean ruler, humanistic values are simply deceit and fraud. As another scholar of Shakespeare, Rhodri Lewis, noted, "it seems to the sovereign that he sees the world with the clarity of a Machiavellian Prince. But at the same time, he cannot fully reveal himself to his subjects."

Like King Claudius in Hamlet, he is doomed to understatement, unable to be say what he really thinks in a world where humanistic values are already present, as in Elizabethan England. As Lewis says, “After figuring out that neither virtue nor objective truth are anything more than words, he resolves to treat moral orthodoxy not as a constraint but as something to be remade in his own image.” Hastily reanimated Soviet formulas about the victory over fascism, macho rhetoric deriving from the street gang world and the world of prison, slogans about the historical greatness of Russia — all these incompatible narratives are being adjusted to the current political needs.

Richard III, according to some historians, was far from being the villain Shakespeare portrayed him to be. However we are not interested in the accuracy of Shakespeare's portrait, but in his vision of autocratic power as a curse — both for the ruler and for the country. Not without reason, from Athenian democracy to the American Revolution, the bearers of republican ideas understood that it must be limited, that the will to power is, in modern terms, a nuclear force that must be restrained by all the forces of laws, institutions and conventions.

Alas, the post-Soviet reformers considered it their main task to drive a wooden stake into the Soviet economy and prevent the return of the communists to power. To achieve this, the Presidential Constitution of 1993 was passed, which gave enormous powers to the head of state. And in the late 1990s and early 2000s, the desire of a part of the liberal establishment to see a new Pinochet, who, as they said then, would allow “economic reforms to proceed without hindrance”, finally led to the nightmare of today. The former reformers themselves, who dreamed of using Putin as a conductor for their ideas, first turned into the “Academic Council under Genghis Khan” (as spiteful critics called the Soviet Academy of Sciences), and then found themselves discarded.

Returning to today: it is quite possible that we are present at the last act of the tragedy. In deciding to patch up the gaps in the Ukrainian front with Russian bodies – recalling Henry V, “Once more unto the breach, dear friends, once more; or close the wall up with our English dead!” – Putin seems to have brought the end of his reign closer. People for the most part will not want to be expendable material for Putin's plans, and many Russian families will not be ready to dutifully send their men to their deaths. In modern society, the still relatively recent Stalinist maxim, “let’s not worry about losses, women will give birth to the new soldiers,” does not work, as the value of human life is immeasurably higher than during previous wars.

Be that as it may, someday Putin's time on the Russian throne will end. But in thinking about building a future Russia, clearly the country’s first priority will be the task of reforming the system of power. Russia does not need new strong rulers, it does not need leaders of the nation who will lead it into the abyss. Federalisation, decentralisation, real and not fictitious separation of powers – this is the only way that can reduce the risks of future catastrophes and prevent new unnecessary and criminal wars.

This article was first published by Novaya Gazeta. Image via: Presidential Executive Office of Russia. 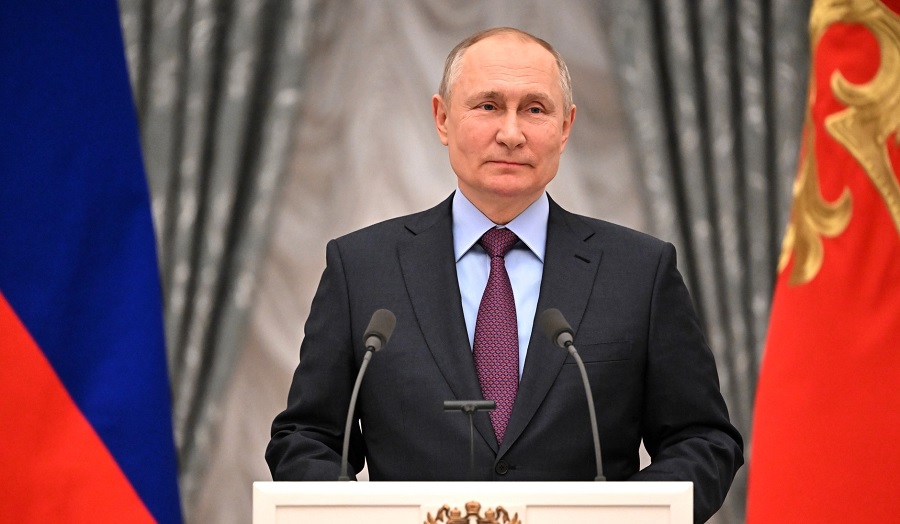