A London Met academic has raised over £1,000 for the people of Nepal by tackling her fear of heights.

Hazel works closely with London Met’s partner institution, Islington College Nepal, based in Kathmandu, and has built strong relationships with the College’s staff and students. During visits to the College, she was moved by the aim of her Nepali colleagues to encourage local students to stay in Nepal after their studies and contribute to the development of the country.

It’s no surprise, then, that Hazel felt personally affected when the earthquakes hit the country earlier this year.

“It is not the temples and palaces that have my attention, but the ordinary people living their lives in cities, villages and mountains,” she says. “I want to know what has happened to the family I met near Nagarkot. I cannot imagine the terror of the people during the earthquakes, plus the ongoing fear of what the future might, or might not, bring.”

Hazel decided to face her own fears to try and raise money to help the people of Nepal, as part of London Metropolitan University’s ‘London Met for Nepal’ fundraising campaign.

“After the earthquakes I knew I had to do something that scared me to contribute to the futures of our Nepalese partners, so I bought myself a ticket to abseil the Orbit,” she said.

“Was I scared? Oh yes! But thanks to my friends, colleagues and Jasur from the MBA group who were there to welcome me at the bottom!

“I want to say thank you to everyone who supported this fundraiser for Nepal. So far we have raised just over £1000, which is amazing.”

Islington College Nepal has played a key role in delivering aid and shelter to its local community following the earthquakes.

“In Kathmandu our partners and students are involved in putting up shelters as temporary school buildings in the villages so the children's education can continue,” said Hazel. “As one of the poorest and inequitable countries in the world, education is essential, particularly for girls and women.

“Islington College is 100% committed to enabling its students to have a positive impact on their own country, and that's why working with them is a privilege.”

You can still donate to Hazel at her JustGiving page. 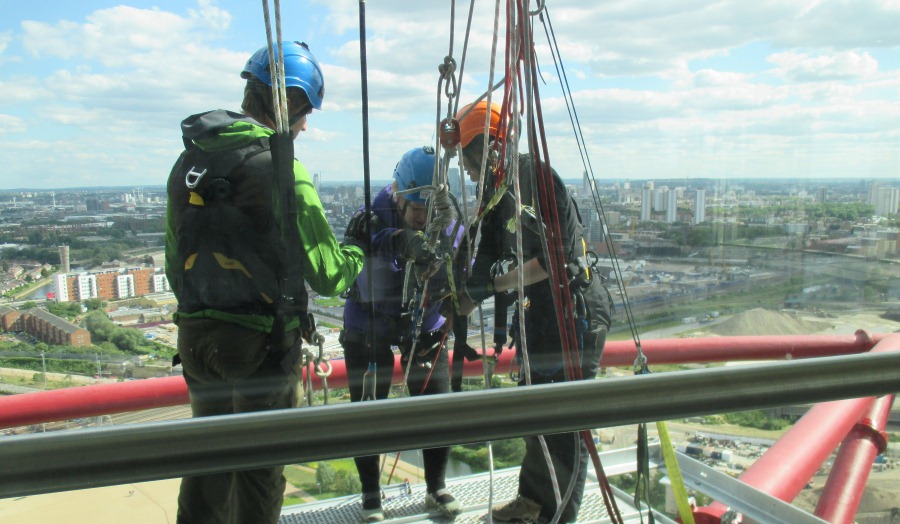