A new monument for Aldgate News from the School of Art, Architecture and Design

Students from a range of artistic disciplines shared their ideas for a new monument for Aldgate, exploring important questions about what we commemorate, why, and who gets to decide.

Students from the Public Art & Performance MA at London Met’s School of Art, Architecture & Design came together this week to share their ideas for a monument in Aldgate, East London.

In collaboration with the City of London Corporation, as part of the annual Aldgate in Winter Festival, the students raised important points around the role of public art in the city, what and who we commemorate and why, and who gets to make these decisions.

Dr Jacek Ludwig Scarso, Reader in Art and Performance, introduced the event, saying "It’s been such a pleasure to work with these eclectic, talented artists from such a wide range of disciplines and see their projects. There are all sorts of questions around memorialisation and commemoration.

"I’m sure everyone is familiar with the important debates that have been highlighted, this year in particular, around the ideologies behind historical monuments and the need to interrogate these. Not only have our artists taken the opportunity to think about what a new monument in Aldgate should be, or represent, but also what the idea of a monument is and what public art should explore."

Each artist gave a short presentation, pitching their concept for a new monument in Aldgate:

Aikaterini offered the idea of the illusion of a magical forest in the middle of Aldgate Square, made from one singular white tree surrounded by a circle of mirrors. "When people enter the installation," she explained, "they will have the sense that they are entering a different, magical world with no pollution – only white trees and grass. We all want to escape from reality from time to time, especially now, with the constant bombardment of negative news from our phone. And when we want to escape, we often want to escape into nature. Different World will be a place for people to enter, relax and hope for a better future."

Meaghan, an American filmmaker, offered a fountain with a warm fire coming out of a white water lily. "The fountain is a tribute to our wishes for the days to come, with the flame representing our hopes for the future and the water lily representing peace. When I think of light, I think of warmth and fire and it reminds me of the comfort of my family home. This year especially, this comfort is an experience I am hoping to recreate."

Beth started with ideas of light, life and nature, and considered the societal taboos of women’s bodies in developing her monument. A life-size Polly Pocket like-house, shaped like a pomegranate, evokes ideas of domesticity and gender norms, while the fruit – the offering from the Devil to Eve in the Garden of Eden – connects to ideas of the womb. Beth wanted to connect disjointed ideas about women’s bodies, and the taboos behind their natural state and menstrual cycles, despite the universal experience of the womb. After all, she said, "everyone has lived in one."

Boyana’s monument was inspired by witch hunts, and in particular how people who are drawn to nature as a way to heal have been seen as witches. Inspired by Nicholas Culpepper, a botanist, herbalist and physician who was accused of being a witch by a client, she proposed a glass house to represent his pharmacy, placed in Leadenhall Market. The interior of the house would be inspired by old pharmacies, filled with herbs, plants and glass bottles. When a person opens the door, there would be a ‘ding’ then a male voice welcoming them to the pharmacy.

The guest will have the experience of being served without seeing anyone, then the sound of struggle when the pharmacist is accused and taken for questioning. Boyana explains, "My main focus is the idea of the spiritual and how people not understanding it, the connection one might have with themselves, was met with fear, as seen by the witch hunts. A big element of the historical experience that takes place inside the glass pharmacy is that everything around you is moving. Looking at the idea of spirituality and the spirit, how the person in a way, still lives on despite the fact that their physical being is gone."

Anastasia’s idea was informed by her performance background and interests in digital art and cinematography. "The key aspect for me," she said, "was community and how people can be brought together in these difficult times. I thought about how even while many of us are apart from the people we care about, we are still connected by our memories." She decided to concentrate on the scents that evoke memories in people, developing a monument made up of interweaving fabrics with projections of pre-recorded interviews with members of the Aldgate community about the scents they associate with happy memories. The infusion of these scents would be layered in the fabric, which people can walk through, touch and interact with.

Visual artist and curator Mae’s monument explored the effects of urbanisation on climate change and light pollution. "I’m really interested in how we are affected by the cities we’re in, but also how we affect the cities. When I sit in my flat, I can hear the birds singing at 3 am, 4 am, and when I looked into this, I found out that light pollution has changed the cycles of birds. I was particularly interested in the effects of light pollution on moths – an insect which is seen as a pest, but are actually one of the most effective night pollinators." Her monument, a sculpture of two ermine moths in Aldgate Square, would be projected with live footage of a designed ‘moth night’ in Epping Forrest. "I want people to consider how beautiful these insects are and how much we need them, using art to encourage rewilding in London and in cities."

For interdisciplinary artist and curator Josie, creating spaces of inclusion has been a focus in her work. "Neighbourhoods need safe spaces for all, but LGBT spaces are increasingly closing," she explains. She would build a geofenced area where a music application is triggered to play DJ sets through mobile phones, with digital projection mapping creating the illusion of a light-up dance floor – all taking place under a Lavender Umbrella, lavender being a symbol of Queer Pride and empowerment.  The umbrella would have pressure-sensitive LED lights that would shimmer in bright colours emitted from the umbrella when it rains. "It’s a monument to creativity, inclusivity and community," said Josie.

Jenny drew upon light and nature as symbols of hope in developing her monument after what has been a tough year. "Nature has been a great source of comfort to me throughout our now-multiple lockdowns, but seeking out nature in central London can be challenging. My monument focuses on nature which is often unnoticed, where it collides with our built environment." She drew upon the cracks that form in pavements when tree roots start breaking through to develop her idea of a temporary living sculpture of a collection of trees in Aldgate Square with cracked concrete around their base. Lights placed underneath the slabs would come through the cracks, with bird and nature sounds playing as you enter the 'forest' to deliver a temporary rewilding of the Square.

Visual artist Anna was interested in how art creates a dialogue between people that sits outside language. Her idea of a participatory art installation which creates space for reciprocal acts of gratitude would be brought to life through a pair of open resin hands protruding from a street wall, offering gifts to passers-by. The sculpture offers an opportunity to engage with local businesses, who could provide gifts to be placed in the sculpture; or passers-by can provide their own. "With skyscrapers punctuating the skyline, Aldgate can often feel like the financial distinct is encroaching on the existing communities. Gratitude is essential in building and preserving social relationships and can prompt generous behaviour towards others, including strangers. The hands would be removed after a month, and taken for installation at a new location. Each time they are removed, they will be replaced by a brass plaque reading 'Something good happened here.' 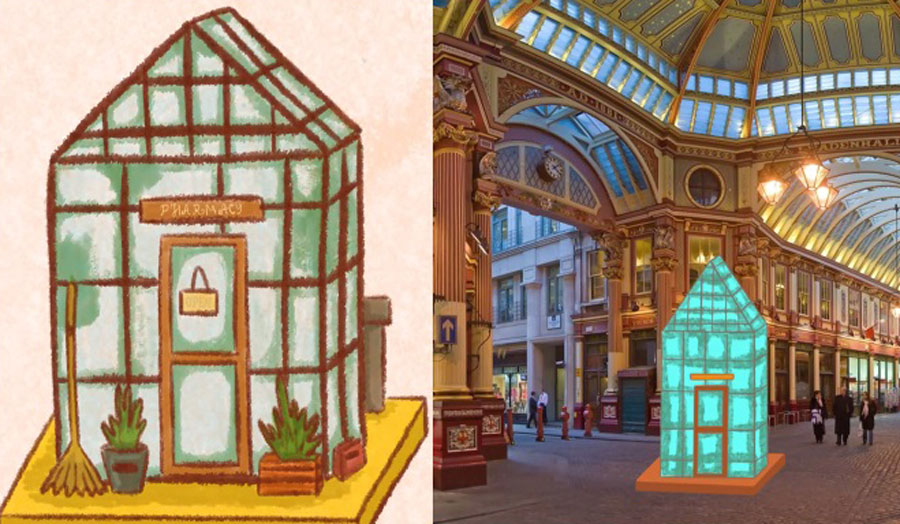 Image from Boyana Aleksandrova's proposal for her monument, Inner Light