A new approach to E-mail News

With London’s air pollution well exceeding official targets, it’s more important than ever to find ways of reducing carbon emissions in the capital.

Now, London Metropolitan University has taken a whole new approach to e-mail by replacing its diesel-fuelled post van with an electric one.

London Met, which has three campuses across central London, has introduced the battery-charged transporter to do its twice-daily runs between sites. The van will save some 765 kg of CO2 every year – the equivalent of 1,551 tube journeys between Holloway Road and Aldgate.

Rachel Ward, Estates Energy Manager at London Met, said: “We were in the process of tendering for a new post van and I had the idea of going electric. We’re city-based and the van is only needed for short hops between campuses so I knew it would be well compatible with our needs.

“We are committed to reducing our carbon footprint and this is one of the ways in which we are doing just that.”

As well as saving on carbon emissions, the van is also a cheaper alternative to diesel.

“It will cost us 3.6p per mile to run compared, to 12.1p per mile for diesel,” added Rachel. “And, because it is electric, it is exempt from the congestion charge and road tax. All in all we’re saving over £3,200 by going electric.”

It costs £3 to fully charge the van’s battery, which will produce energy for 106 miles.

Bernardette Boenecke, Campus Services Assistant, said: “It’s very quiet, so you have to beep when you’re pulling out because pedestrians just don’t hear you coming. It was very strange at first – it’s so quiet that you can hear the wheels on the road.

“It’s really smooth to drive though, and because it’s automatic there’s no danger of it stalling which always helps!

“With the decline of petrol stations, fuel price increase and the need to be eco-friendly, electric vehicles are the way forward. It's great to see that London Metropolitan University has made a positive stance and is at the forefront in adopting a more on-trend approach to using vehicles.” 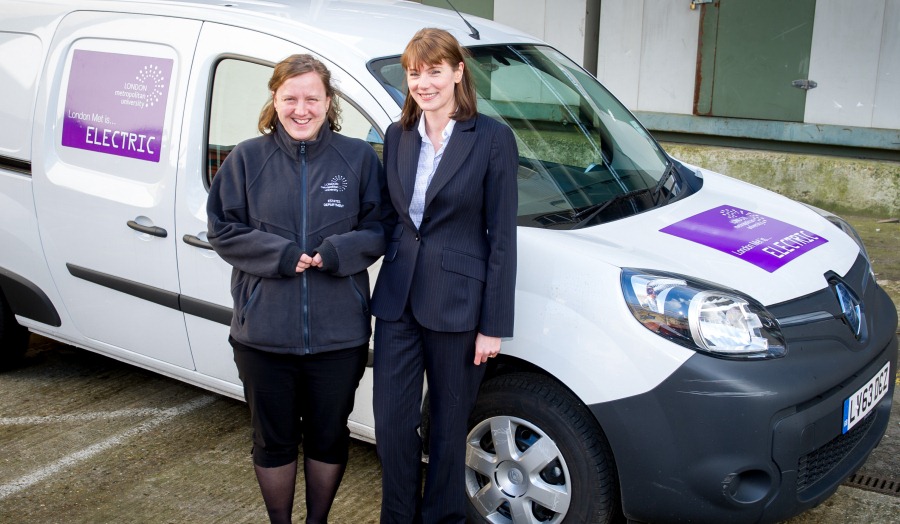