A Modern Maypole for London’s Northbank News from the School of Art, Architecture and Design

Half of the shortlisted designs in the London Festival of Architecture competition are by practices led by Cass alumni.

Three of the six shortlisted practices in the London Festival of Architecture Modern Maypole competition are alumni of the Professional Diploma in Architecure (RIBA Part II) course at The Cass.

Submissions by Thomas Randall-Page (with Benedatta Rogers and Cake Industries), Alex Scott Whitby (Scott Whitby Studio and Whitby Wood) and Maria Smith (Interrobang) all of whom studied within the ‘ Free Unit’ on the postgraduate course are included in the final shortlist.

Colourful Language by Thomas Randall Page with Benedetta Rogers and Cake Industries celebrates London’s diversity with dozens of differently coloured ribbons, each representing a language spoken in the city, connecting a map of London suspended overhead and joining together at the tip of the maypole.

Maypole by Interrobang is a slender spire supporting a colourful suspended net, which can be illuminated at night. A seating area beneath contains a pattern of “ribbons” radiating from the base of the maypole.

Maypole by Scott Whitby and Whitby Wood is a tall tensegrity structure, forming a lightweight pylon that rises above the neighbouring rooftops, constructed of slender rods held together with thin cables, with a framework shape that is reminiscent of the neighbouring church spire.

The winner of the Modern Maypole competition will be announced in early December.

The Modern Maypole competition looks back to London’s built tradition, and aims to create a temporary landmark for the 2018 London Festival of Architecture that can act as a focal point for visitors and passers-by. In keeping with the London Festival of Architecture 2018 ‘identity’ theme, the project will also explore contemporary expressions of communal identity and shared experience. The maypole will stand outside the church of St Mary-le-Strand: the site of London’s largest maypole which was constructed after the restoration of the monarchy in 1660 and towered over the 17th century city. In 2018 the Modern Maypole will stand in a transformed cityscape, a reminder of how radically London’s skyline, character and identity have changed over the centuries.

Ruth Duston, chief executive of The Northbank BID has said: “The community around the Northbank is a diverse one, yet very strong together in its shared identity of ingenuity and creativity. We’re delighted with the proposals, all of which will enliven the space on Strand-Aldwych that acts as a stepping stone between international centres of innovation. With more permanent plans to transform this area’s public realm, this is the first step and will help businesses and visitors alike to engage with the space in a new and fun way.” 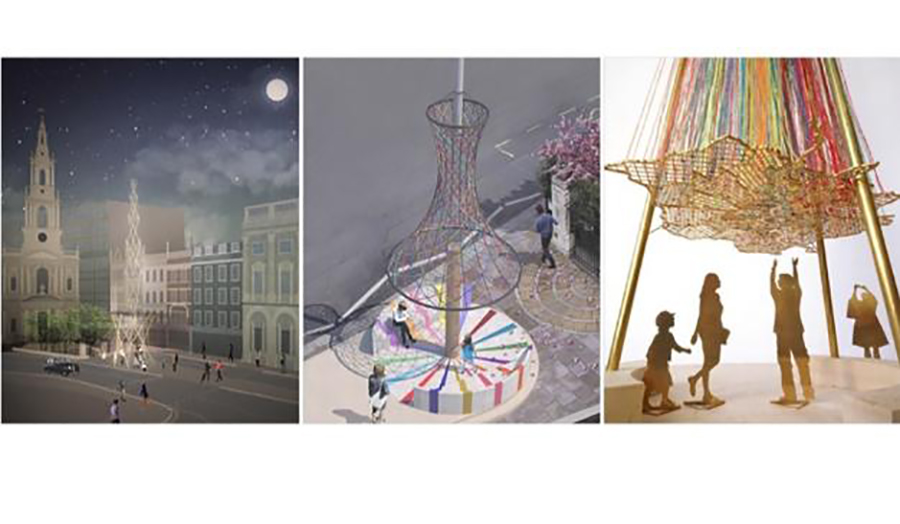