Filming castle conversions in Tuscany doesn’t feature in most people’s job descriptions, but shooting and editing video stories like this is how Alex Negueruela now makes his living, working for Shoreditch-based fintech company Wise. He reflects on his time at London Met where he graduated with a Digital Media MA and how it’s impacted his career.

Tell us more about your job at Wise...

I’m the UK Video Lead, which mainly means I lead a team of four videographers within the creative team. Our job is to produce video ads for Instagram and Facebook primarily (we use other platforms as well) to get new customers. The challenge is to explain hidden fees and exchange rates to people who don’t even necessarily know they are being overcharged in their international money transfers.

What I most enjoy is knowing that this is a company with a mission to make the world a better place. It’s a suicide mission that we call Mission Zero, where once achieved, sending money abroad will be instant and free, meaning we will no longer be necessary. But leaving the ethical values aside, from a more selfish perspective, in my 20 years of work experience I have never felt so looked after as a member of staff with any other employer. For this company customers are first, true, but members of staff are almost as important. And that, at my age, is very reassuring.

You do a lot of video interviews all over the world – who’s been your favourite interviewee?

When we source these people we generally go for more relatable cases, people who use us to send money back home to support their families, pay student loans, etc. But we also go for unusual cases. To me, the most extreme is the case of a Danish/American couple who used us to pay for a castle in Tuscany that they then converted into an AirBnB where you can book pizza making workshops, oil making, etc.

But the one I remember as the nicest person was a guy in southern England who collects driving license plates from all over the world. He is quite obsessed and has gathered so many that he had to build a shed outside the house to store them or else his wife would have kicked him out! The fact that he was also the nicest guy helped with creating the story.

What’s your biggest passion in life and why?

I think that would be telling stories. I consider myself one of those lucky people who managed to make their passion their career. In my spare time I still like to find subjects and make little documentaries about them. One of these was my final project for my MA. It was an interactive documentary that once I graduated, I re-edited as a traditional linear documentary. This took me to a few festivals around the UK at a time when I was quite new in the country, so that was very exciting.

Can you tell us a bit about your background and what led you to London Met?

I did a two-year course in filmmaking when I was 20 after dropping out of an engineering degree. This was in Spain. After that I joined a production house very focused on art and geography documentaries, genres that would become my passion. Then in 2012 I was sent to cover the London Olympics as a Samsung Ambassador and I fell in love with the city. In 2013 I was again sent to London to generate content, this time for Beefeater London Gin (not so popular here but number one in sales in Spain). This time I didn’t go back after the three-month commission was over. I needed to start my career from scratch, and I thought that I needed to refresh and update my knowledge, since I had been doing the same for the same clients for 10 years. The Digital Media MA seemed the perfect choice.

What was your favourite project or work experience at the Uni – and why?

Definitely the final project. As I said, it was an interactive documentary. Since documentary is (and had been for a while) my comfort zone, at first it didn’t seem to me a good idea, since I wouldn’t be challenging myself. It was my supervisor, Elena Moschini, who encouraged me to find a way to stretch my skills whilst still sticking to my passion. And not only did I learn a lot, but I enjoyed the whole process. Seeing other classmates being stressed with their projects whilst I was having such a great time was very empowering. And when it was over, I had a big project to be proud of. Link to my documentary is here, if anyone is curious.

What was the most valuable thing you took from the course?

The most valuable thing I took from the course was the professional approach to creative work. I had been working in the same production company for 10 years prior to taking the course, and over there we all knew each other just too well, and we were all very creative and extravagant in our own way.

Sometimes it’s easy to forget how to be professional in a competitive environment and London Met brought that back to me. The course prepared me to be able to present my concepts, ideas and treatments with a much more solid rationale and strong arguments, with the right research, which I believe are basic best practices when you aim to be a competent professional.

What was your favourite spot at the University and why?

The library for sure. The one opposite the tube station in Holloway Road. I spent countless hours there, and have a few interesting memories, like seeing football fans going to the Arsenal stadium right behind, or the day I got carried away until way after closing time (like an hour-and-a-half later) and didn’t even realise… the guard I bumped into on my way out wasn’t as happy.

My highlight of the MA was one teacher, Elena Moschini. Her knowledge seemed endless and she was always very much willing to share it. She probably won’t remember me*, but she made an impact, and I still fantasise that one day our paths will cross in a professional capacity. I will consider myself very lucky. She always seemed to have the right advice during the development of my final project, and sometimes her advice was the opposite to what I expected!

I guess the learning process, although that might be a Spain vs UK thing. Things were much more left to our discretion in the UK, which seemed more challenging but also ensured that we’d actually learn something, instead of just memorising a syllabus.

If you could choose one word to describe your experience here, what would it be?

How’s the pandemic affected your job / your life?

I have to admit I’ve been very lucky. I work for a company that has put us and customers first and has also been very transparent at every stage about how the crisis was affecting our numbers. In terms of my day-to-day job, I used to interview customers before, which is not an option at the moment. So it’s all turned into animation and re-editing old videos.

On a more personal note, I have been struggling with this working-from-home scenario, and I have found myself in a place I had never been before, regarding my mental health. I’ve struggled more than I anticipated. And as the lead of a small team that also meant that I had to keep an eye on those reporting to me, to make sure that they were ok, and that I was providing the support they needed. This was all very new to me, because a) I hadn’t struggled with mental health before, and b) I haven’t been a team lead before. So it’s been a journey. Or I should say it still is.

What’s next for your career?

That is a question I dread. This working from home thing has pushed our team into exploring options in animation. In that frame I have recently fallen in love with 3D animation, in particular with Cinema 4D. I realise that at 40 years of age it might be a bit too late to start a new path, especially one so complex and technical. But at the moment I’m having a lot of fun learning and playing with the software, and not having big expectations feels great.

Any tips for students thinking about this subject here?

My genuine advice is: go for it only because you love it. If I am completely honest, I don’t know if I can say that the MA has opened any doors for me. In my industry it’s more common to look at someone’s showreel than the education section of a resume. What I can say, however, is that in every meeting I attended since, in every project I presented, in every pitch I ran, but also in every difficult conversation I’ve had as a project manager or as a lead, I was the best professional I could be, and the best professional I could be has been shaped to a big extent by London Metropolitan University.

Is there anything else you’d like to tell us about your time at London Met that isn’t covered above?

I don’t think teachers and lecturers are paid enough.

*Lecturer Elena does remember Alex and she's delighted to hear how his career has progressed. 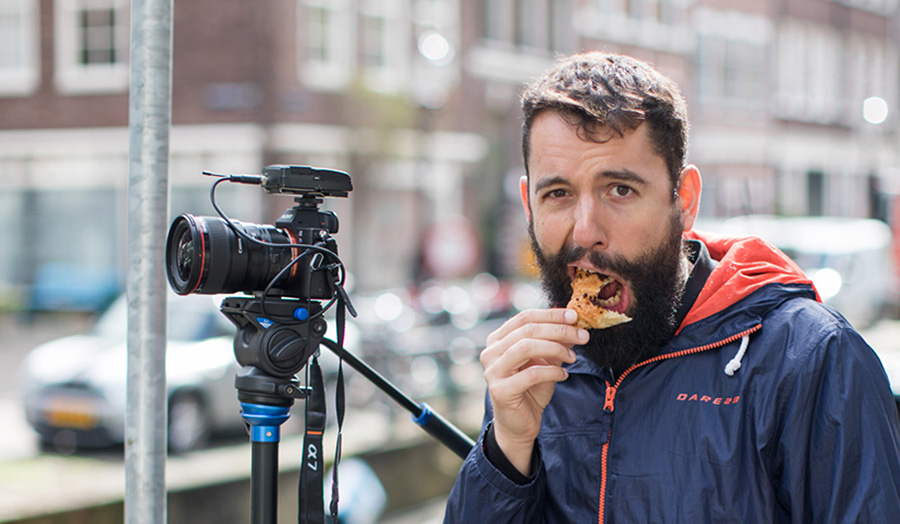