The winner of this year’s National Student Survey Prize Draw has spoken of how London Met helped him find the career of his dreams.

Digital Media graduate Ozie Foster won the top prize of £1,000 after being entered into the draw when he completed the National Student Survey (NSS) earlier this year. He said his course opened his eyes to a whole world of career options and helped him discover his passion for animation.

“I was working in procurement but was unfortunately made redundant,” said Ozie, who studied in the Faculty of Social Sciences and Humanities at London Met. “So I decided to do something totally different, and thought about going to university to get a degree. At the time I thought I wanted to work in web design, and the course at London Met was perfect for what I needed.”

Ozie credits the Digital Media course with helping him find his vocation after being introduced to animation during his studies.

“The course covers a wide range of areas and I learnt a lot of new skills,” he said. “Before I started, I’d never have thought in a million years that I would end up working in animation! But that’s what has happened.”

Ozie’s course also played a role in helping him secure his first experience in the industry according to the talented graduate, who now works as an intern for major animation house Rupert Ray.

“One of my lecturers, Mary Mullen, had a contact in a small graphic design firm in Lambeth, and she told us about an opportunity to intern there via an editing competition. I decided to enter and I won. That led to a place at a company called Nylon Films and through them I managed to get in at Rupert Ray.”

The good news didn’t end there for Ozie though, with £1,000 now his thanks to him filling out the NSS Survey. When he received the email telling him he had won the money, he wasn’t convinced it was genuine.

“I was the Best Man at my friend’s wedding and so I was a little distracted, but I remember checking my emails in the car on the way. I read it, and re-read it and then said, “I think I’ve just won £1,000. It was really strange!”

Ozie, who is married with two young children, plans to take his family away with his winnings.

The NSS draw takes place every year as a thank you to students for filling in the survey. Over £2,000 was given away in prize money to students this year.

Health and Social Policy student Oluwakemi (Kemi) Adelekan scooped £200 in the prize draw. She plans to work as a primary school teacher when she graduates.

“I’ve always wanted to work with children but it’s only recently that I’ve realised I’d like to teach,” Kemi said. “I’ve really enjoyed studying at London Met. One of the reasons I chose it is because it is so close to where I live, which has made it very convenient for me.

“The course has been really good.”

Ozie and Kemi came to London Met on 9 June to collect their prizes at a small ceremony with Deputy Vice-Chancellor Professor Peter McCaffery and the Dean of Students, Dr Graham Taylor-Russell.

Graham said: “The NSS is incredibly important for universities, so it’s always nice to be able to give something back to students. We look forward to receiving the results of the survey later this year and using them to make sure we’re making improvements in the areas which matter most for our students.” 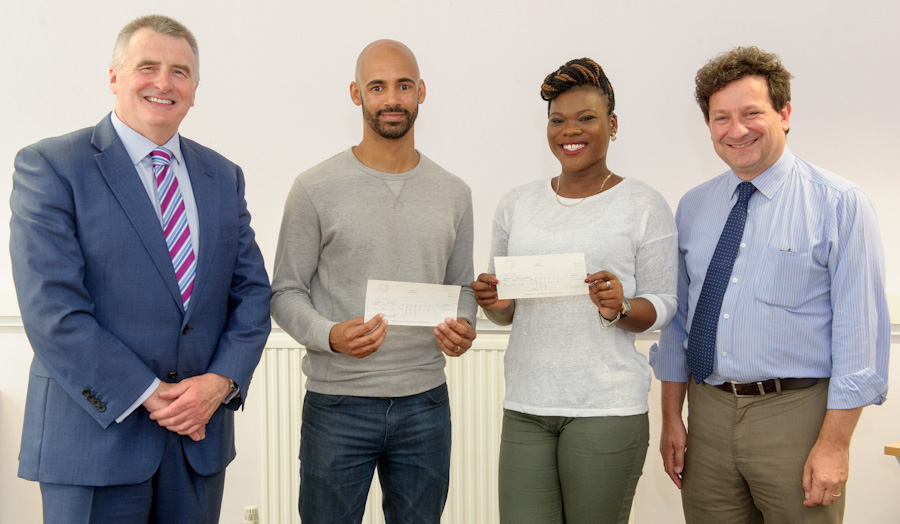