Every year, thousands of students across the country complete the National Student Survey. At London Met, those who take part are automatically entered into a prize draw with a top prize of £1,000.

Criminology graduate Fiona Joseph won the top prize of £1,000 in 2016 after she completed the National Student Survey (NSS). On being notified of her win, she had to be convinced that the email she was sent was genuine!

When collecting her cheque at a ceremony with the Vice-Chancellor, Fiona talked about how the staff at London Met had gone the extra mile for her on a number of occasions, which really helped to ease the pressure she was experiencing. Having been admitted to London Met from another London university, she quickly noticed the difference in the level of support she was receiving. She recalled a sense of relief when accorded her dyslexia assessment having failed to receive the same kind of response at her previous institution.

When asked what she planned to spend her prize draw money on, she said, “I want to take my son, Kymani, to the places I couldn’t whilst I was busy studying. I want him to see life”.

Isaac Tendo, a graduate of BA (Hons) Advertising, Marketing Communications and Public Relations applied to London Met because its location worked with his lifestyle. When asked what he planned to do with his prize draw win, he said, “I’m getting married in two days’ time so the money will come in handy during my honeymoon in Thailand!”

Prize winner Anisa Nur, who studied on a Biochemistry degree, credits her time at the University for huge advances in her own personal development. She says, “I came to London Met as a teen and left as an adult. I learned about myself, I learned about being independent not only in an academic sense but socially, too”. With her £150 prize win, Anisa planned to treat her mum, who had just come out of hospital, and to hold on to the rest until she found something worthwhile.

Narada Oates decided on joining London Met because of its role as his local community university, being located conveniently close to where he lived. The things Narada enjoyed most about his time at London Met were the lecturers, whom he found to be really helpful and knowledgeable; and the facilities on offer, which he knew would provide the support he needed to do well in his studies and get a job. Having completed the Accounting and Finance BA course, he found at job at London Met’s clearing operation, which he enjoyed immensely, whilst applying for graduate level jobs elsewhere. He said, “I’ll put my prize draw money in the bank and save it for a rainy day”.

Another prize-winner was Pal Major, from Hungary, who came to study at London Met because he had a friend already studying here. Pal enjoyed the location of the University and, having completed his studies on Illustration BA, was working full-time whilst looking to secure his first experience in the world of creativity.

The NSS draw takes place every year as a thank you to students for completing the survey. Over £2,000 will be given away in prize money to students this year.

Fiona, Isaac, Anisa, Narada and Pal came to London Met in September 2016 to collect their prizes at a small ceremony with the Vice-Chancellor Professor John Raftery.

London Met considers the NSS to be incredibly important and looks forward to receiving the results of the 2017 survey. The findings will be used to make sure the institution is making improvements in the areas which matter most for students.

Find out if you’re eligible for the NSS now: www.thestudentsurvey.com 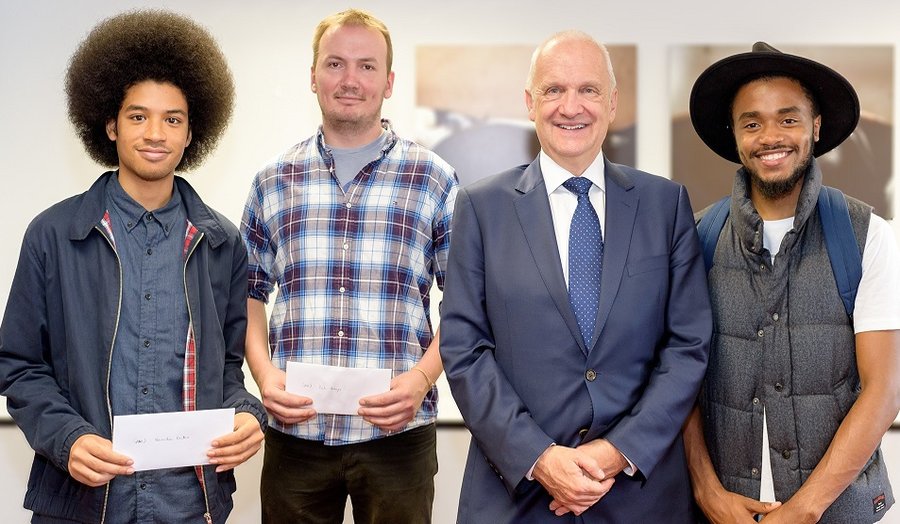