International PR expert visited London Met to deliver a guest lecture to the Guildhall School of Business and Law students.

“He was such an inspirational and amusing speaker that I just had to buy his book!” beamed Zuzanna Kordel, a BA Advertising, Marketing Communications and Public Relations student.

She was referring to a guest lecturer who visited the Guildhall School of Business and Law last month by Bob Leaf, the former CEO of Burson Marsteller, a leading global public relations and communications firm.

Bob was a leading player in the heady 60/70’s growth days of PR, having been sent from New York to not only set up the first ever Moscow-based consultancy but also China’s first western communications agency on behalf of Burson Marsteller. “These were pioneering days for the industry but also great fun and a fascinating learning curve for me,” he said.

Taking that cue, students responded in kind, queuing up for signed autobiographies and to discuss hints and tips from such a leading light in the industry. Not only did he cover his extensive experience from back in the day, but Bob also touched upon a number of today’s trending issues ranging from the perception/reality debate, disruptive technology and the potential impact of rising nationalism.

It should also be noted that he was impressed with the nature of the post talk questions. “The students were great, not only engaged with the subject but also keen to discuss the employability issues, corporate and societal relationships as well as the best place to catch a ball game,” said Bob.

This was Bob’s third visit to London Met and was just as highly appreciated by staff and students as his very first. 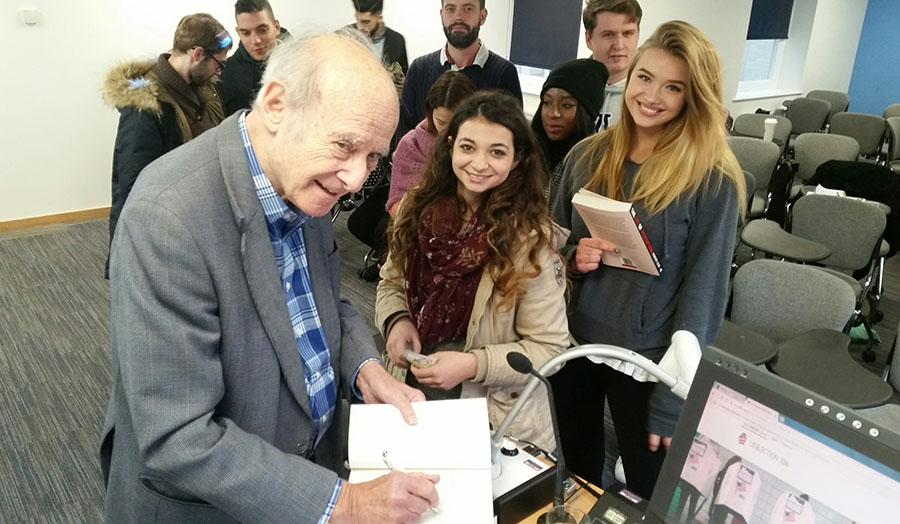