Earlier this week, London Met’s International Relations students attended a talk by Holocaust survivor Hana Kleiner, where she provided her moving yet heartbreaking account of life during and after The Holocaust.

The talk was arranged in partnership with the Holocaust Educational Trust, who aim to educate young people about the Holocaust and raise awareness and understanding of the event.

Hana was born in 1927 in Czech Republic, in what was then known as Czechoslovakia. She and her sister, Sonja, grew up in a small town called Hradec Kralove.

She opened the event by saying “the enormous number that died during The Holocaust does not enable us to think of the individuals who perished.” From here, Hana began to recount growing up in Hradec Kralove. She spoke of the small Jewish community her and her family were a part of; her happy childhood and schooling; and, most importantly, how she never experienced any anti-Semitism.

Sadly, this all changed in 1939, as news broke of the Nazis rounding up Jews throughout Europe. Hana’s parents, fearing the worst, managed to get both Hana and Sonja onto a list of children to be taken, by train, to the safety of England.

“It will not be for long” is what her parents told as she and Sonja were escorted away. This would be the last time Hana would see and speak to her parents.

Hana and Sonja were raised by a foster family in Lincolnshire, where “all refugees were treated well, like family.” The sisters attended the local college together and during that time, they communicated with their parents through letters.

The amount of letters from her parents began to dwindle. They stopped all together in 1941, and in the final letters, Hana’s father was honest about the terror and humiliation they had been enduring. Both her parents, since Hana had been evacuated, were forced to do manual labor for the Nazis, whilst wearing “the yellow star.”

The letters stopped as Hana’s parents were sent to Terezin Camp, a concentration camp and ghetto. It was here that they were both killed, along with 1096 other Jews taken from their hometown. Both Hana and Sonja received letters from an unknown person explaining that their parents had been killed.

Hana tried her best to get on with life. She left Lincolnshire for London, where she studied Chemistry at the Polytechnic of North London – which would later become London Metropolitan University, making Hana an alumna of the University.

After graduation, she worked for many years as a chemist and a translator. Sonja decided to move back to Czechslovakia, where she later died of a heart attack at 36.

Now without any family, Hana did not speak much of events until she met her husband Cedric later on in life. Cedric taught her to open up what had happened to her family.

Hana and Cedric travelled back to Hradec Kralove on the same train which brought her to England, the Winton Train, in 2009, marking the 70th anniversary. It was here she met the 669 other children who had been rescued. This journey sparked something in Hana, and made the decision to tell her story to as many people as possible.

She found numerous people in her mother country who not only wanted to hear her story, but to help her. Through this support, Hana found two cousins she knew nothing about, who she keeps in constant touch with. Hana also had a street named after in her hometown.

With her story coming to a close, Hana explained how she has “been fortunate enough to live a long and fulfilling life, which has only happened through the help of other people. However, the memory of the war has never left me, even as I get older.”

Hana believed that after The Holocaust, never again in her life would she see another genocide, yet this has not been the case. “What lessons can and should be learned from The Holocaust?” she asked the audience.

She answered her own question; “That every human being deserves respect, regardless of race, colour or creed.” 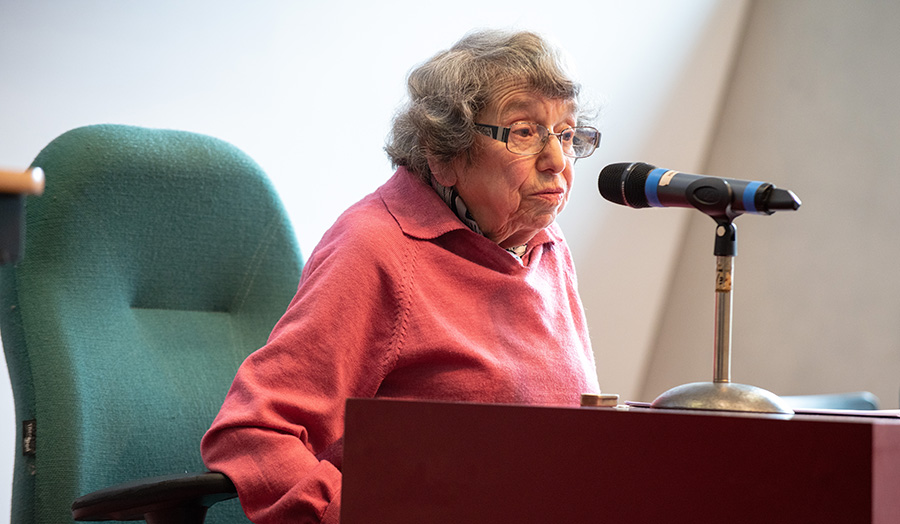