London Metropolitan University hosted a panel discussion on Wednesday 7 March to investigate and debate whether human rights should be compromised in the interest of national security.

London Metropolitan University hosted a panel discussion to investigate and debate whether national security should be compromised in exchange for human rights.

Hosted by the School of Computing and Digital Media, the talk was attended by students studying Journalism BA and other students from across the School.

A wide range of experts sat on the panel. Brigadier Geoffrey Dodds, Chair of the Defence and Security Advisory Committee, Adam Wagner and Jem Collins, the founder and writer of RightsInfo respectively, and Rachael Jolley, editor of Index on Censorship.

“Our recent debate on whether human rights conflict with national security was an exciting chance for students to test their questions with experts in the field, including Brigadier Geoffrey Dodds, of the government Defence and Security Media Advisory Committee, Rachael Jolley, editor of the famous magazine Index on Censorship, and Adam Wagner and Jem Collins of campaigning group Human Rights Info. Our guests were highly impressed by our students’ news sense and persistence: the marks of true budding journalists!”

Chaired by Simon Cadman, senior lecturer in Journalism BA, students who attended the event had the opportunity to ask the panel experts a range of questions. One student asked if the panel thought that human rights had been breached as part of the recent allegations that Russian spy, Sergei Skripal, and his daughter were poisoned.

In response to this, Rachael Jolley argued that people have the right to know to what is going on in the world. Brig Geoffrey Dodds said that at the moment there is no threat to national security regarding this news. He continued that explain that it could be argued that this case is an embarrassment to the national government.

The panel debated topics such as what is classed as ‘hate’ on social media and whether our human rights are the same online as they are offline. Students studying Journalism BA at London Met often have an insight into panel discussions and can use the expertise and knowledge of those working in the industry to support their studies. 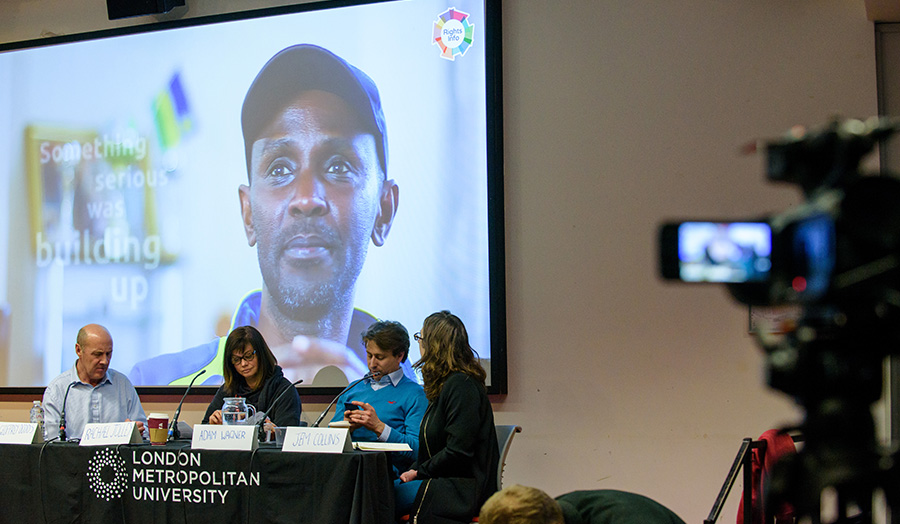