Clare Qualmann Perambulator News from the School of Art, Architecture and Design

Clare Qualmann, who teaches on Visual Communication at The Cass, is exhibiting work from her perambulator project at an exhibition in New York.

Saunter Trek Escort Parade (STEP), which takes place during Thursday 6 - Sunday 30 September at the Flux Gallery, seeks to be an overlapping convergence and entanglement of walking, walk-based works and programming, mobilizing throughout New York. STEP embraces the many ways and bodies people walk while asking how walking as a creative act can challenge notions and open conversations around a variety of issues including visibility, gender, labour, exploration, counter-mapping, colonialism, feminism, and motherhood. The exhibition is curated by Christina Freeman, Emireth Herrera + Moira Williams.

Clare is exhibiting photographs from her Perambulator project at STEP. Talking about the origins of the work she explains: “In 2011 I began a new walking project, ‘Perambulator’, conceived in response to the shift in my walking (both in everyday life and as part of my art practice) following the birth of my son. The first public component of the project was a mass walk, with prams, around Lewisham art house in London. In 2014, following the birth of my daughter, I extended the project through a month long walking residency in Huntly, Scotland, with both children in tow. During my stay in Huntly I walked extensively with my daughter (then 7 months old) in the pram. Huntly is a small town and so we often arrived at the edges. My response was to make a series of walks testing the boundaries of the town for their accessibility to a pram user. Following each path that led out of the town, and photographing the point at which I could push no further. The resulting images, of a pram 'stuck' in the Scottish landscape act as a visual metaphor for the shift experienced as a new mother - encumbered by wheels - as well as a record of each walk that I undertook to the limits.”

While she is in New York, Clare will produce a new set of images as a counterpoint to the Scottish photographs, capturing the limits of accessibility for the pram in an urban environment. The new photographs will feature on an instagram takeover of The Edgeworker a project dedicated to artists who explore place. She will also lead a perambulator walk in New York, inviting stroller users to walk together en masse around the Long Island City neighborhood, collectively surveying its challenges. 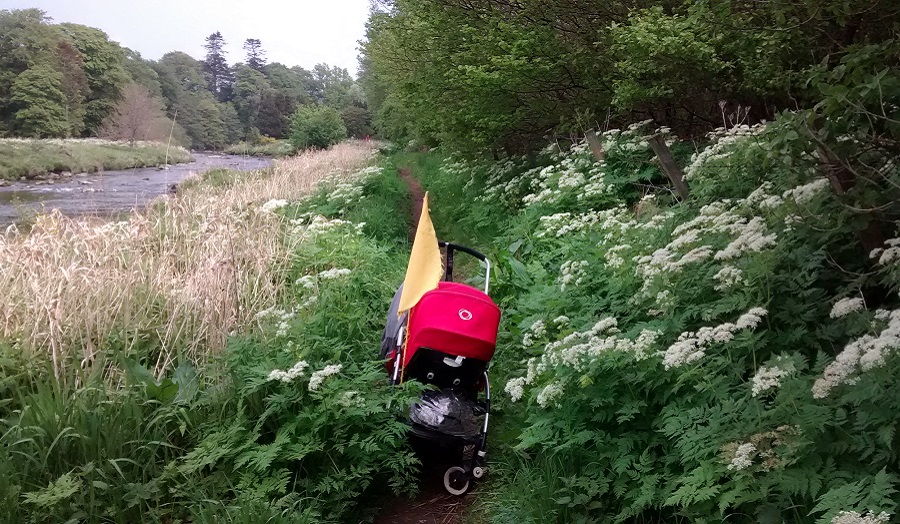