When London Met Pharmacology lecturer Dr Samir Nuseibeh heard the headline ‘Breastfeeding linked to higher intelligence’ one morning, his scientists’ scepticism kicked in. He decided to look into the story, and was angered by what he found; important elements of the study in question had been totally lost in the media report, resulting in a misleading message being broadcast to millions of people.

This example opened an entertaining evening at London Metropolitan University, when scientists and media professionals came together to debate the ethics of science journalism.

“Reading the News is Bad For Your Health,” Scientists Say took place on 21 April, and saw over seventy students, staff and members of the public come together to debate the issues.

Richard Evans, Senior Lecturer in Journalism, chaired the forum, and began by asking the audience how many of them felt they could trust what they read in the news. Only two people thought they could.

On the panel were Dr Samir Nuseibeh, Senior Lecturer in Pharmacology, Dr Esther Murray, Senior Lecturer in Health Psychology and Dr Fiona Lethbridge, Senior Press Officer with the Science Media Centre. Each panellist delivered a short presentation, showing one example of a science news story which illustrated their viewpoint.

First to speak was Dr Samir Nuseibeh, who selected the BBC report on the correlation between breastfeeding and intelligence to explain and highlight the issues of reporting epidemiological studies. He explained that an epidemiological study looks simply at correlative data, but does not use scientific testing to prove a hypothesis.

Dr Nuseibeh’s presentation sparked healthy debate in the room about the uses and limitations of correlative data, with Richard Evans deploying an amusing example.

“There is a correlation between sleeping in your shoes and waking up with a headache,” Richard said, “but the cause of the headache is almost certainly not the shoes!” Everyone who had ever experienced a heavy night on the drink knew exactly what he meant.

Dr Nuseibeh agreed. “Correlation does not show causation, but this is always omitted in news stories like this. There is a correlation, for example, between wearing hoodies and anti-social behaviour. But that doesn’t mean wearing a hoody causes people to act anti-socially.”

Dr Nuseibeh’s presentation also exposed the many channels of communication that take scientific findings from the lab to the reader.

“We actually need mass media sometimes because it does change behaviours,” Dr Murray said. “Newspapers love scare stories because they sell papers, but they can help to promote the health measures people can take to try and control viral outbreaks.”

Dr Murray argued that there is, however, a responsibility on the media over how they report stories, citing two media reports on the same story which took dramatically different approaches. One was written in emotive language, cultivating fear but offering no remedy; the other took a balanced approach and presented a more positive outlook.

It highlighted how papers can present two very different stories based on the same scientific research.

Dr Fiona Lethbridge gave the final presentation, introducing the work of the Science Media Centre, which encourages closer collaboration between scientists and the media.

Fiona discussed a recent project she worked on that communicated to journalists scientific evidence that showed that taking statins is a safe and beneficial practice. This resulted in much more measured reporting, which eased public anxiety around statins.

“There is a tendency for people to blame journalists for suspect reporting of science, but I have to say that all the reporters I work with, who are on the nationals, all try their best to get it right,” Dr Lethbridge said. “I think the standard of science reporting in the UK is actually very good.”

The presentations prompted debate and discussion throughout the event with Dr Lethbridge highlighting the importance of the press release and the responsibility that lies with press officers as the first point of communication.

Another key issue raised by the audience was the role of editors in the publishing process. After all, when a reporter files their story, it is no longer in their hands, and if a paper or media organisation has a political position or agenda on certain issues, it is inevitable that the final story will reflect it.

The debate concluded with two outcomes; that reporting science responsibly is crucial and that this can be achieved with better communication between all parties - scientists, press officers, and journalists alike.

The event brought together experts from London Met's Faculty of Social Science and Humanities, and the Faculty of Life Sciences and Computing. 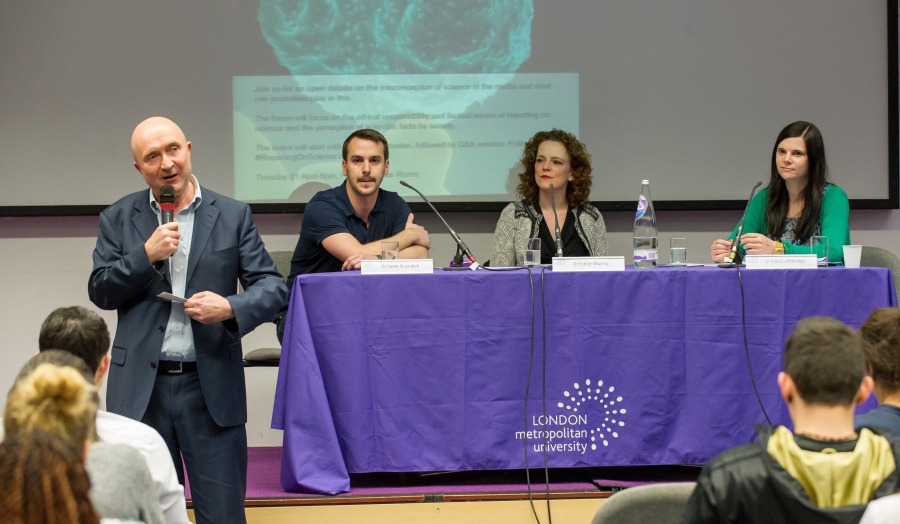