Leanne Carr moved to London after graduating from drama school, before having a change of heart and applying to the Journalism BA (Hons) course at London Met.  She’s now a reporter at Retail Week, an industry leading b2b magazine. Leanne took some time out of her busy schedule to tell us about her time with London Met.

Over the three years, I learnt everything there is to know about journalism. Not just how to write, but other invaluable skills such as presenting, editing, how to use designing software, media law and interview skills.

Tough but fair. So encouraging and always willing to help even if it was out of office hours. A few of them have also got some moves when it comes to parties at The Rocket!

We were always able to hire and loan camera equipment when needed and it was great having an onsite TV and radio studio. Although the library is great, I much preferred using the reporters’ room that was exclusively for journalism students and had the right computers and programmes available at all times.

What did you do outside lectures when you had some free time? Any favourite London spots?

I love going out and letting my hair down. There weren't many parties at The Rocket that I missed! If I wasn't going wild I'd be hibernating at home in front of some rubbish TV to give my brain a rest.

Were you a member of any clubs or societies?

I was involved with Verve magazine from first year and was made editor in my second and third years. The skills I learnt from putting the magazine together are things that people are actively seeking in job applications. It really put me above others when applying for jobs.

You were a mature student. How was the experience for you?

Even though technically I was a mature student I didn't feel mature. I was slightly nervous to begin with about other students younger than me but was pleasantly surprised to find students the same age and older. There is constant support if you need it and I've always said that London Met is a university that gives mature students a second chance.  People's lives don't always work out the same or go in the same direction. It also doesn't mean they aren't smart or as determined to succeed so why should their age stop them? I honestly believe if I hadn't gone to university as a mature student, I wouldn't have done as well as I did.

What led you to choose to study at London Met specifically?

When looking at league tables for Journalism courses, London Met scored quite high. Location was important and I wanted to be in the thick of it not in the middle of nowhere on the outskirts of London.

Did anything surprise you about London Met?

The Students Union is great, along with how much the University actually cares about the students, which is really nice. I understand universities are businesses but I never felt like just another person to make the place more money. It's like a little (big!) family.

Have you had any work or industry experience as part of your degree?

In second year we had to go on a two-week work experience placement. I went to the ITV studios on a placement which was set up all thanks to one of my lecturers putting in a good word for me! It's not what you know but who you know!

What have you been doing since you graduated?

I'm now a reporter at Retail Week which is an industry leading b2b magazine. I also have my own radio show on Hoxton Radio called The Student Surgery and now write freelance content for titles under TI Media including Celebs Now, Woman and Woman & Home.

Have you any advice you'd like to pass on to new students?

You WILL get that assignment finished. Trust me! No matter how stressful it gets – and it does – even more than you can imagine – but it will be the proudest moment of your life so far when you finish. Even if you like to pretend you don't give a crap. 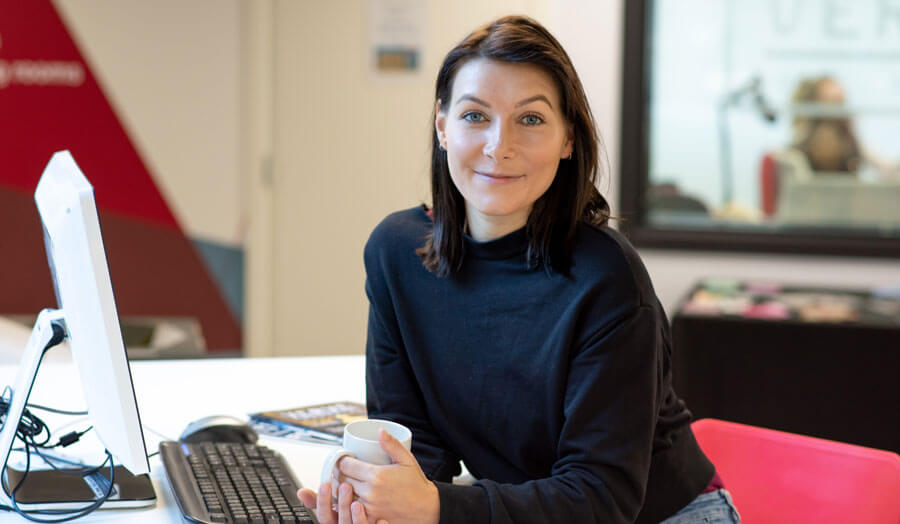